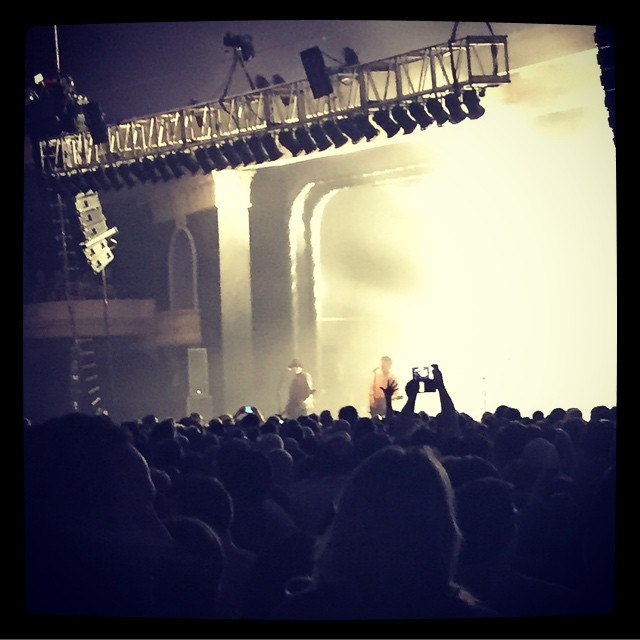 It was at a rest area outside of Mauston, WI. At least I think it was, because there was a giant sign talking about moss and when we got back in the minivan Vodo said something about the Moss and Mauston so I have decided it was Mauston.

Heather & I were loitering outside the rest area, stretching our legs and backs, turning our faces up to the warm sun, and enjoying the cool breeze.

“Ahhh,” Heather said. “Wouldn’t it be great if they were playing outside?”
“Yes,” I said. “A blanket, some beers, the Replacements at sunset.”

Now some people are very anti-outdoor concerts. The sound is floaty, the vibe is different, etc. I get that. But at the same time, I’m all cool breezes, eating hot dogs on a patch of grass, and remember that time with Jason Isbell and the fireflies? FIREFLIES!

A lot of times when arguing with anti-outdoor people I just shout FIREFLIES! As though that proves my case. I should have probably been a lawyer.

However, after see The Replacements in Milwaukee, I can kinda see their point. And I hate that.

This was my third time seeing The Replacements. Ever. First time was outdoors at RiotFest in Chicago. Second time was outdoors when they played “If Only You Were Lonely” for me in front of a million other fans at Midway.

And now Milwaukee at the Eagles Ballroom which is the same building (but different venue) where we saw Westerberg in 2005.

First of all, FINALLY I have seen The Replacements more times than Sister #2, Ben, and Max. I feel very good about that.

Second of all, HOLY SHIT did seeing the ‘Mats indoors rock the motherfucking Casbah, and I put the credit for this at the feet of the crowd. I forget what a difference the crowd can make at a show, especially because I’ve seen so many outdoor shows lately.

From the second song (Favorite Thing) the crowd roared along with Westerberg, who throughout the concert kind of hung back and let the crowd sing. Apparently he has some sort of ailment that’s affecting his voice. I didn’t mind at all, because there’s nothing I love more than a dorky singalong.

In fact, at one point, during Alex Chilton the crowd was so euphoric and into it and singing along that I think we all kind of levitated off the ground, en masse. The energy contained by the building was just that powerful. I had forgotten what that can be like, that confined musical energy. It’s fucking magic.

And so was Saturday.

I was worried going into my third Replacements’ show that I would be disappointed. I’ve been listening to these songs for twenty years and heard a lot of my favorites live a bunch of times (mostly with Westerberg) solo. Plus, I’m a jaded, bitter, cranky old goat who hates everything.

But hearing those songs, with that crowd made everything fresh and new again. Hearing all those voices singing together was amazing. A lot of the tweets and pictures I saw talked about how the venue and the concert felt like church. It was a gathering of like-minded souls in one place to worship at the alter of music that has been vital to them at some point in their life, and yeah, we were worshipping a little bit of nostalgia, what of it. If you were there you would know the whole night felt kind of sacred, divine. You need to only witness the beatific smiles of the people as they poured out of The Eagles Club to know that something mystical happened inside that building.

Or you could have taken one glance at me when the ‘Mats covered The Jackson 5’s “I Want You Back” and then when right into “I Will Dare.” My eyes filled, I couldn’t control my own dancing feet, and my face split into pieces from smiling so hard.

It was so rad.