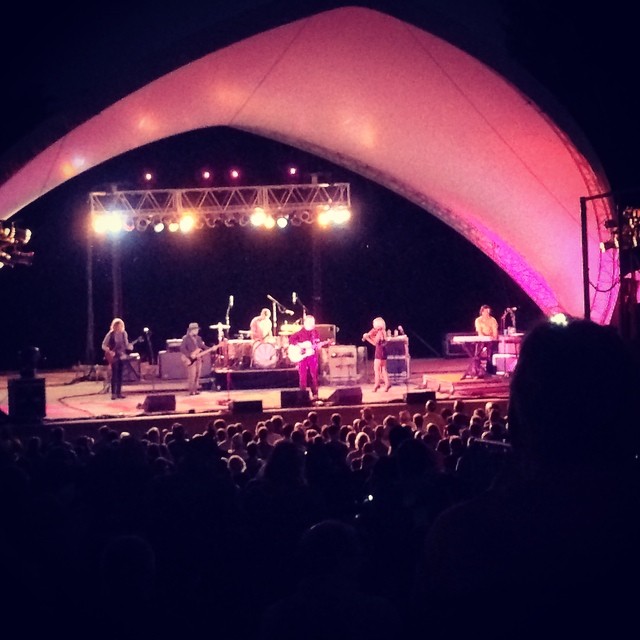 After a year of being in a semi-monogamous relationship with Jason Isbell’s album Southeastern, I finally made the time to go see him play. On Wednesday Jaycie & I joined Wolfdogg & Heather in their minivan and journeyed down to Mankato.

It was amazing. It was the kind of amazing that still gives me goosebumps thinking about it days later. There are many things I want to write about this concert and I don’t know what order to put them, so I’ll start with the best.

At one point while Isbell was in the midst of the song “Traveling Alone,” right before the sky went completely dark, a few fireflies flitted past where we were sitting. Jaycie squealed in delight. “I’ve never seen a firefly before,” she said. I closed my eyes for a second, breathed in, and then tweeted: 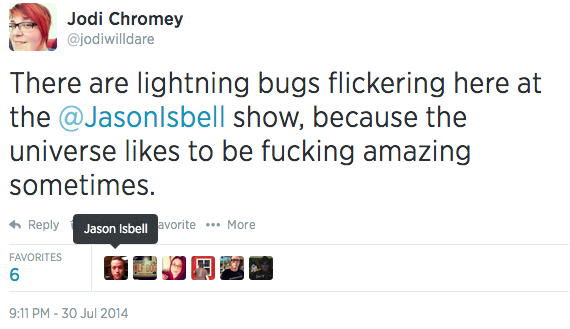 (I didn’t actually die of joy until the next morning when I spied that favorite).

It was one of those perfect concert moments, one of those exquisite life moments when you are acutely aware how spectacular your life is in the very moment it is being spectacular.

And I spent the whole night stacking those moments one right on top of another:
The Morrissey joke Isbell made after commenting on how the whole place smelled like meat (there was a Ribfest preview going on);
the way Jaycie squirmed with happiness whenever Isbell’s fiddle player (and wife) Amanda Shires stepped up to the mic;
singing along to “Dress Blues” & “Super 8” with Wolfdogg, and joining the rest of the crowd on “Elephant;”

when Heather came back to where we were sitting after the concert and said she bawled through the whole thing;
how stunningly beautiful “Cover Me Up” was. It was so beautiful that I had to close my eyes for half of it because my senses were overloaded.

Way back in winter when we had Rock & Roll Bookclub at Supergenius HQ, while Wolfdogg was playing one of Isbell’s songs, I made a crack to the room about how I was pretty sure Jason Isbell wanted me to love him. I had a list of reasons that included the fact that he had recently finished reading Infinite Jest. As you can probably predict, the members of my bookclub mocked me to within an inch of my life, and with good reason. It was a weird thing to say, but still true.

Wednesday night as we clapped our way through the teeny intermission before the encore, I leaned over to Wolfdogg, “See,” I said, pointing at the stage. “He totally wants me to love him.” Wolf nodded his head, “I can see that.”

Even though I love them, outdoor concerts are kind of a crapshoot. Relying on the whims of Mother Nature can be dangerous, especially in Minnesota. I know a lot of people who hate outdoor concerts. The sound can be floaty and weird, people are picnicking instead of listening, and there is the outdoors.

I imagine playing outdoor venues can be hard for artists too. How do you make something as big as the outside feel intimate and personal? I don’t know, but Jason Isbell managed it. He was really fucking good. His band was tight, the sound was amazing, and his banter was spot-on — created in the moment like he was talking to us rather than a sort of canned pre-thought string of commentary he’s used everywhere else.

Whenever you’re in a semi-monogamous relationship with a record there’s the overwhelming fear that you’ll be disappointed when you hear it live. I worried that I might be bored by wankery guitar solos and magic that didn’t hold up in person like it did on vinyl. There was no need for that worry (though I did get a little sigh-y & eyeroll-y during “Never Gonna Change”), because the concert was even better than I imagined.

Semi-related: I just discovered this Ryan Adams & Jason Isbell duet of “Come Pick Me Up” so if you need me I’ll be over here spoojing for the rest of the day).