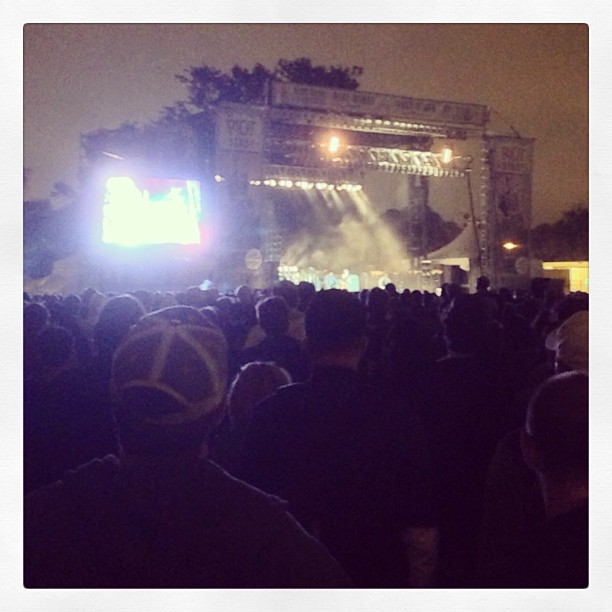 Where do I even begin?

So I saw The Replacements, my very favorite band on Earth, and I didn’t die. At least not for very long. During “Androgynous” when Paul Westerberg asked “Hey did you see Joan Jett the other night?” My heart stopped. My soul shot from my body and exploded over the muddy field in Chicago, and if a doctor had been nearby I’m sure I would have been declared clinically dead. Cause of death: Joy.

But I came back to life, and I’m pretty happy about that because they played my song right after “Androgynous” and if I had died before seeing The Replacements do ” I Will Dare” some sort of plagues would have been visited upon the Earth.

If you want an actual review, go read Andrea Swensson’s at The Current (and if you want to see for yourself I put all the videos from Sunday in setlist order over at Paul Westerberg.net). I don’t think I’m capable of putting any sort of coherent words around the concert. It was fun. It was amazing. It was better than I expected and exactly what I wanted. They sounded good, like they were having fun and not like they were there to collect a check (which was my unvoiced fear).

About three songs in, it hit me that I was seeing The Replacements and I bawled my fucking head off. It was a moment I didn’t think would ever happen, and when it finally did I was so overcome with emotion that it had to pour out of my eyes. I mean what else can you do when you finally see the band whose music is woven into your very being, the music and the words of their songs as much a part of you as your marrow and DNA?

There’s nothing you can do. It’s like the holy spirit of rock & roll takes you over and you’re dancing and singing and smiling and crying all at the same time and it doesn’t even feel like anything because you have ceased to exist and instead have become one with the music and the people and the mud and dark Chicago sky and the glory of it all.

My state of euphoric bliss was pretty apparent. I know this because a woman who grew up in Chaska and celebrated her 46th birthday on Sunday tapped me on the arm after “I Will Dare” and shouted up to me,”You look so happy!” I smiled down at her, “I AM!” I’m pretty sure my giant, sweaty, smiling potato head was glowing like a beacon.

Now you know why I can’t play poker.

It feels as though I’ve gone through some sort of religious experience, like I’ve witnessed something so grand and epic that mere words cannot convey what it was like. Perhaps the people who saw Moses part the Red Sea felt kind of like this. (That’s the only sort of religious thing I could think of, didn’t most of those burning bush type things happen to dudes when nobody else was around?)

My friend Malmsy called me today since we didn’t have a chance to see each other on Sunday and most of the conversation went like this:
“Wow.”
“Yeah.”
“It was so good.”
“I know!”
“Yeah.”
“Wow.”

And if you were privy to the phone call you would have heard the smiles in our voices.