Most of the magic in the universe coalesced inside Midway Stadium in St. Paul, Minnesota last night. I know this is true because it’s the only thing that can explain that how in a crowd of 14,000 people I ran into so many people I knew. Within a minute of walking onto the field I spied my friends EM from Madison and Richard from Toronto.

And at one point after The Hold Steady played and before The ‘Mats started a woman I went to high school with spotted me in the crowd. “Did you go to Blaine? Are you Jodi Chromey?”
“Uh, yeah,” I said, dumbfounded.
“I knew it,” she said. “I knew who you were the minute I saw you.”

Even Sister #2 was a little amazed by how many people I talked to. She knows my angry hermit tendencies more than anyone. But for real, I hugged more people yesterday than I have hugged in all my 42 years thus far. The ‘Mats make me affectionate, apparently. Another theory is that the joy pent up inside of me had to get out and I leaked it all over everyone who smiled at me.

But the real proof of magic, I am convinced, is that at 9:45 I sent out that tweet above, a hope to hear “If Only Were Lonely.” It was a wish I started putting out into the universe on Tuesday when I wrote Greatest Hits According to Me: The Replacements. And I put it out there again when I told Ross Raihala of the Pioneer Press it was the song I wanted to hear more than anything else. Poor Wolfdogg had to hear me wish for it about 88 times, and each time he’d sadly shake his head and mention some poppycock about they’re not going to bust out that slow sad one in the middle of the rock show. I believed him, because he’s usually right about these things. 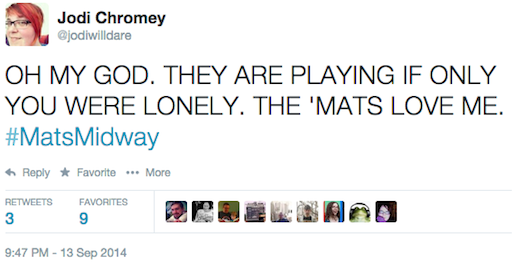 I lost it, darling ones. I lost it all over poor Wolfdogg who hugged me when it started, and I lost it on Twitter, and I lost it in the middle of Midway Stadium as tears fell from my eyes and I got to sing the words “I ain’t very good but I get practice by myself” and “somewhere there’s a smile with my name on it” along with Paul Westerberg. If you want, you can watch the video and sing along too.

And I’m kind of losing it a little right now just remembering it. It’s not often you get exactly what you want from the universe, and last night I did.

Can you fucking believe that?