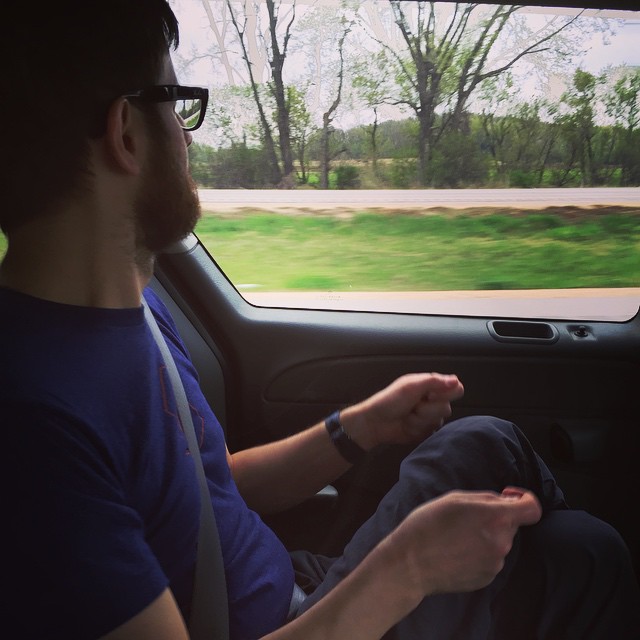 Bringing the disparate areas of your life together can be a little nerve wracking. When I invited Vodo my former Loft teacher and now friend to join Heather, Wolfdogg, and I on our journey to Milwaukee, I was worried.

Vodo is kind of awkward. I’m the reigning Queen of Awkward. Wolfdogg is a slightly taller & nerdier dude version of me. Awkward + Awkward + Awkward has all the potential to equal the worst thing to ever happen inside a minivan ever.

But then there was Heather. I was putting all my eggs in Heather’s basket. Heather is nothing but grace and charm and putting people at ease. She’s the best hostess ever. We could have invited the Queen of England to sit in the way back and we’d still have been okay, because Heather’s easy goingness makes everything smooth.

The day started a little rough. I was five minutes late (because I am an asshole), Vodo was ten minutes early (because apparently he is not), and within forty-five seconds of sitting in the back of the van Vodo was throwing stuff at me.

“What is this?” I asked.
“I don’t know it just came off,” he said.
“VODO YOU BROKE THE MINIVAN ALREADY?” I shouted.
“Nah,” Wolfdogg said. “That’s been broken.”
“You’re gonna get us kicked out before River Falls,” I snarled as we took off.

Because I was so nervous I kept up a pretty consistent run of stream-of-consciousness chatter, which for an introvert who rarely has to talk to people with her mouth is a lot of work. However, my fear of awkward silence far outweighs my fear of sounding like a babbling idiot. The more you know.

I told them how awful I was at dating and how hard it was to find someone suitable and how I was very popular with short men who wanted to be lifted up. This and Hobbits became a running joke of the weekend.

“Short man in fancy dress? I have no time for you,” Vodo said at one point dissing both my feelings toward the book and my views on most men who want to go out with me in one fell swoop.

And while I tried to tamp down my disdain for all things Hobbitty and StarWarsy and Doctor Who-y, the conversation that flowed from some of those topics was my favorite of the entire weekend, because it’s then that I got to see three people that I adore find something else in common.

There was a very long discussion about Doctor Who that I kind of tuned out of. It was nice.

And while the trip down to Milwaukee was all anxious energy and anticipation and jokes a minute, I kind of liked the trip back to Minnesota more.

Four weary music fans low on sleep and high on coffee. Comfortable with chatting and intermittent lapses into silence.

I spent a lot of time with my head against the window singing, because I am incapable of not singing in a car no matter who is in that car with me. Sorry Queen of England & anyone else who has to go on a road trip with me in the future, you’ve been warned. At one point Wolf even complimented me and Vodo on or harmonies when we dueted on Teenage Fanclub’s “The Concept.”

What was so great about this trip home was that the songs then spun out conversations about books or movies or other songs and musicians. There’s much to be said about being trapped in a car with three incredibly smart people who share the same pop culture sensibilities as you do, even if the left side of the car is being total assholes about your inability to listen to long instrumental intros to Death Cab for Cutie songs.

And even though I spent a lot of non-singing time threatening that left side of the car where Vodo & Wolf sat my favorite part of the whole trip was watching the two of them airdrum to whatever song was on the radio.