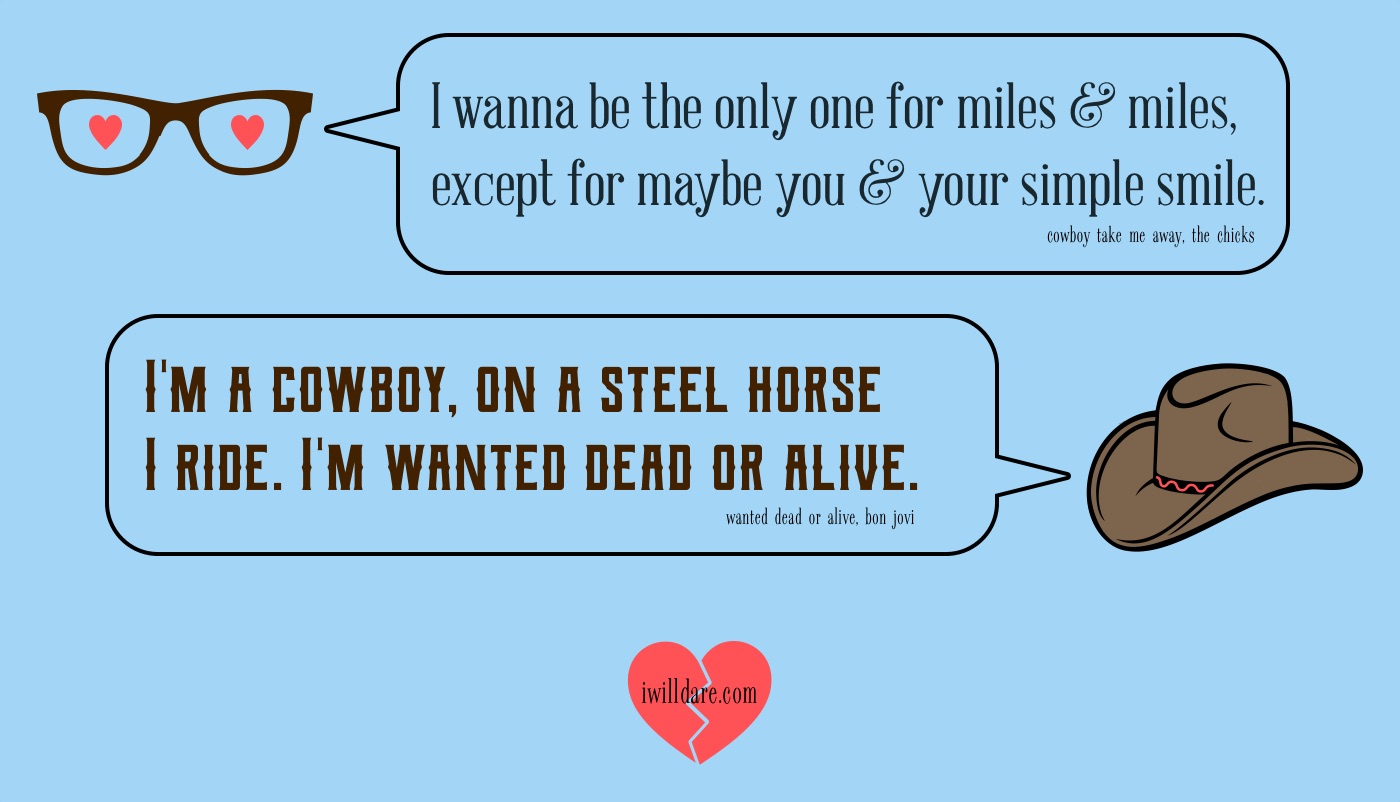 Ok, Darling Ones, before we get into this latest bit of nonsense I need to remind you of two things.

So, it was Thursday afternoon and I was out in Ruby fetching my groceries, aimlessly singing along to the oldies station as I am wont to do while in Ruby. For the record, the three songs I had sung thus far in the trip were, in order, “We Didn’t Start the Fire” by Billy Joel, “We Built this City” by Starship, and “When Doves Cry” by Prince. I fucking love the oldies station.

I’d just cleared the roundabout at Spencer & Vierling when Bon Jovi’s “Wanted Dead or Alive” came on. I was singing it as loud as possible as I made my way down Spencer. It was when I got stopped at the light on Seventeenth that I had the sad fantasy.

What if I met a man I think I might want to be my cowboy and I sing him “Cowboy Take Me Away” and he responds with “Wanted Dead or Alive” by Bon Jovi? What if he is sincere and not simply hilarious? How devastating would that be?

I can’t fuck someone who seriously loves Bon Jovi above all else. Back in the early aughts, Sister #4 was engaged to be married to a man whose all-time favorite band was Bon Jovi. I believe he told me the fandom referred to “Wanted Dead or Alive” as the national anthem. They called off their wedding like a month before it was supposed to happen. Bon Jovi, surprisingly, had nothing to do with that turn of events.

Not gonna lie, I can get down with the Jovi on occasion, especially if I’m feeling oddly nostalgic for ninth grade (rarely happens, junior high was the kind of trauma I’ll never get over). I listened to a lot of “Slippery When Wet” on my pink Walkman in ninth grade. I had made my own tape from the record I had bought with the money I earned as a dishwasher at Country Kitchen.

I liked to take the pink Walkman to all family events and then sulk in the corner listening to Bon Jovi as loud as I could while all my boy cousins made fun of me for listening to devil music. These were the same cousins who had the Aerosmith “Toys in the Attic” record the cover of which scared me when I was a kid because of whatever is going on in that left corner.

So, for the length of a red light I was wrecked over finding an imaginary someone who wanted to makeout with me who was a legit Bon Jovi fan. But then the light turned green and I had to flirt with some of the trees with the sexy red leaves. I was home and closing the garage door before “Wanted Dead or Alive” was even over.

In case you are wondering, the only correct response to me singing “Cowboy Take Me Away” to you is any line from “Wild Horses.” I really hope that was obvious.

I’ve seen a million faces & I’ve rocked them all,
Jodi

*An actual cowboy is not required. He could be a Paul Bunyany type or a big city cutie with slim hips and nice shoes. I’m not picky. He does have to be GenX, have a taste in rock & roll I can respect, enjoy a vigorous debate, and maybe be amenable to some cowboy role play. I’ve dated Millenials and Boomers. It didn’t work out so well for me and not just because their taste in music is suspect. Also, tangentially, yesterday I had a crush for about 25 minutes on a boy born in 1994. NINETEEN HUNDRED AND NINETY FOUR! If I hadn’t just sprung from the shower upon the realization that I had tattoos older than that young man, I would have jumped back in to scrub myself clean. In my defense, the kid had just said and I quote, “the pedagogical prowess of Boyz II Men and Jodeci has shaped me.” I am only human.