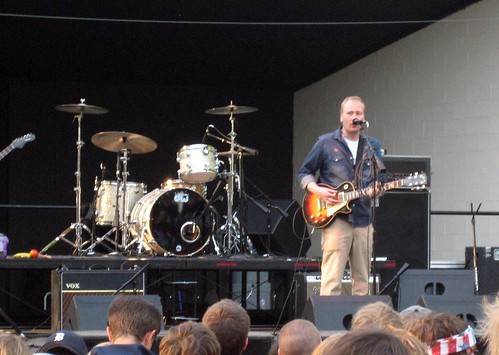 Once again, I journeyed over to the lovely campus of UW-River Falls to imbibe on some Mike Doughty goodness. It was good, but it was not as good as last year. I take part of the blame for the not as goodness. With being sick last week and then using all my pump it up at the Last Night of Class, I didn’t have much energy left to bust out the Make Sweet Sweet Love to me Vibe™. And as we all know, the vibe is essential to any Mike Doughty Music Making Experience.

Plus, unlike last year, I had to deal with Mr. Targussen’s 11th Grade Chemistry class from RFHS. Here they are: 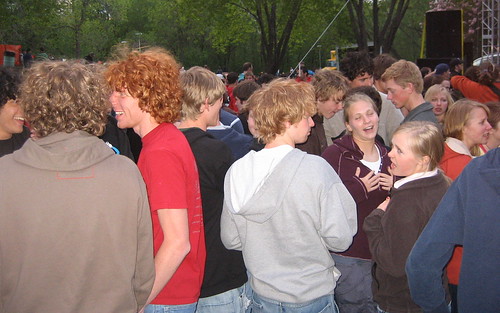 Cute, aren’t they? Also annoying as fuck. Apparently all of the teen population of River Falls had also decided today was a lovely day for a concert. They were there en masse to see Reel Big Fish. I KNOW!

I had no idea Reel Big Fish were still a band, much less a draw. Let me tell you this, they are HUGE in River Falls. Sadly those who love the Big Fish do not love the Doughty. Instead of actually listening to Doughty, or maybe you know, moving to the back, the 11th graders from Mr. Targussen’s Chem class decided that front and center of the stage was the absolutely perfect place to screech, wrestle, make cell phone calls and generally be normal annoying as fuck small-town teenagers.

I did not kill any of them, though I had to resist the urge to lecture. They were harshing all over my Doughty buzz. Damn kids and their unappreciation for the rock and the roll.

But still and all, it was a free Mike Doughty concert in the beautiful wilds of Wisconsin with the crab apple trees in bloom and the wind blowing. So really, can one complain too much?

@JoshuaMunn I didn’t throw them all away. Just some of them.

@amycrea I loathe baking. However, one nephew made a cinnamon babka last night. The other one made a cake today.

Cleaned the China cabinet; alphabetized my records; cleaned the yarn cart; and straightened the front closet. I even threw away a bunch of “good” boxes. #SpinsterUpdates

On I So Lounging Jason Isbell & Amanda Shires are covering “Unknown Legend.” 😍