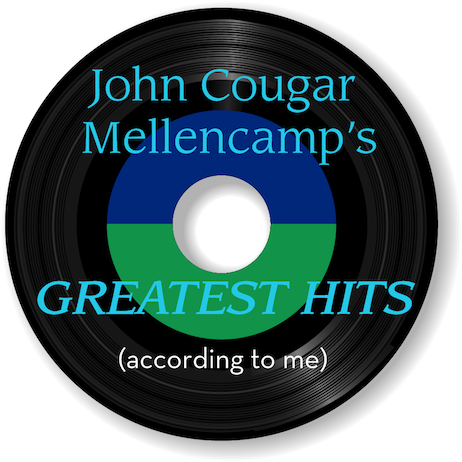 Over Christmas, I spent a lot of my time trying to con Sister #4 into performing the dance at the end of John Cougar Mellencamp’s “Cherry Bomb” video for a Very St. Martin Christmas. Despite my cries and pleas, she denied me my one true Christmas wish. Bitch.

I love John Cougar Mellencamp and have for as long as I can remember. The affair began with one of those videos where he wore a Fonziesque leather jacket, back when he was still Johnny Cougar. Yum! For most of my life I’ve had a penchant for Fonziesque characters.

In the interest of educating the masses, I’m presenting you with the ten best John Cougar Mellencamp songs. This is the definitive list, the one right and true list of his greatest hits. Sometime in 2011, I predict, Johnny C will be getting the Hall & Oates treatment, whereby all the hip kiddies are going to discover his downhome, rootsy genius and cover all his songs. Those kids need this kind of a list. I do this for the future, people. I would not steer you wrong. I speak the truth.

10. Ain’t Even Done with the Night: I’ve said it before, and I’ll say it again (and again and again) handclaps increases the goodness of a song by at least 32%. It’s science, people, don’t argue with me. This song is a charmer about a fumbling guy who obviously likes the girl he’s on a date with and he doesn’t know what to do next. Plus, it mentions Sam Cooke.

09. Lonely Old Night: I like to think of this one as a follow-up to “Ain’t Even Done with the Night.” The relationship that began with all that first-date angst has run its course, they’ve broken up and now, now, they’re lonely and when that happens you turn to your best exs for some comfort. Also, the way he sings “she calls be baby, she calls everyone baby” is awesome.

08. Cherry Bomb: I originally had this slated at #4, mostly because this is a personal favorite, and a lot of that is because of the goofy dance in the video. But my occassionally wise friend Josh made a good point (which doesn’t happen often so I had to take his words to heart) when he said, “If I want to hear a song about how high schoolers got old and pathetic, I’ve already got “Glory Days.” And “The River.” And, well, 50% of the Springsteen catalog.” Well played, Josh.

07. Hurts so Good: There was much heated debate at Supergenius HQ when it came to whether to include “Hurt’s so Good” or “Authority Song” on this list. Both are good songs with merit. But they have a same-y kind of vibe. The decision went to “Hurt’s So Good” merely because of. . . yep, you guessed it, handclaps!

06. Small Town: City snobs and hipsters who dislike the Coug turn their noses up at this song. Well you know what I say? Fuck ’em. Much like a lot of small towns this song is charming as hell.

Rain on the Scarecrow: This song is foreboding right from the first note, and that’s even before he gets to the blood on the plow and the ninety-seven crosses in the churchyard. I think there must be something about growing up in poverty that gives me a soft spot for songs about struggling farmers. It’s a mystery to me. What’s not mysterious is that this song rules.

04. Paper in Fire: This needs no explanation.

03. Wild Night: Yes, it’s probably controversial to put a cover so high up on the list. However, in my defense, it’s better than Van Morrison’s original, it includes the words “boogie woogie,” and then there’s Me’shell Ndegeocello (most fun name to say in the whole wide world? Probably). Also, who doesn’t love a really good duet? Nobody, that’s who. In college, my friend Whitley and I used to sing this song all the time. Whitley had one of those beautiful voices honed on church choirs solos and I sounded like a frog in a blender. But I could really rock the Me’Shell “and inside the jukebox roars just like thunder” part.

02. Pink Houses: The ironic thing about this song is that it’s one of a handful (along with “Small Town” and “Rain on the Scarecrow” that gets Johnny C. pigeon-holed as a midwestern hick, that’s because the city liberals like to believe they live in progressive urban enclaves and that once you leave the city limits you’re in red country. Wrong. One of the best things about this song is that John McCain would play it at his election rallies until Johnny C told him to stop. Also, handclaps!

01. Jack & Diane: Sure, sure, you’re probably saying, make the obvious choice for #1. But it’s only obvious because it’s so right! It’s the iconic, go-to John Cougar Mellencamp song. You cannot argue with Jack & Diane. You know that life does indeed go on long after the thrill of living is gone. Plus, more handclaps!

The Sisterclub loved this song when we were kids, all of us. Mostly, because our mom’s name is Diane. When we threw our parents surprise 30th Anniversary party we even included a little song and dance portion of the evening that included rewritten lyrics to this song.

Okay, okay, I’m sure I left off your favorite song. Feel free to leave corrections. After all, this is a list to help the hipster of 2011 get it right when they start covering the Coug in all his midwestern glory.

Greatest Hits According to Me John Cougar Mellencamp