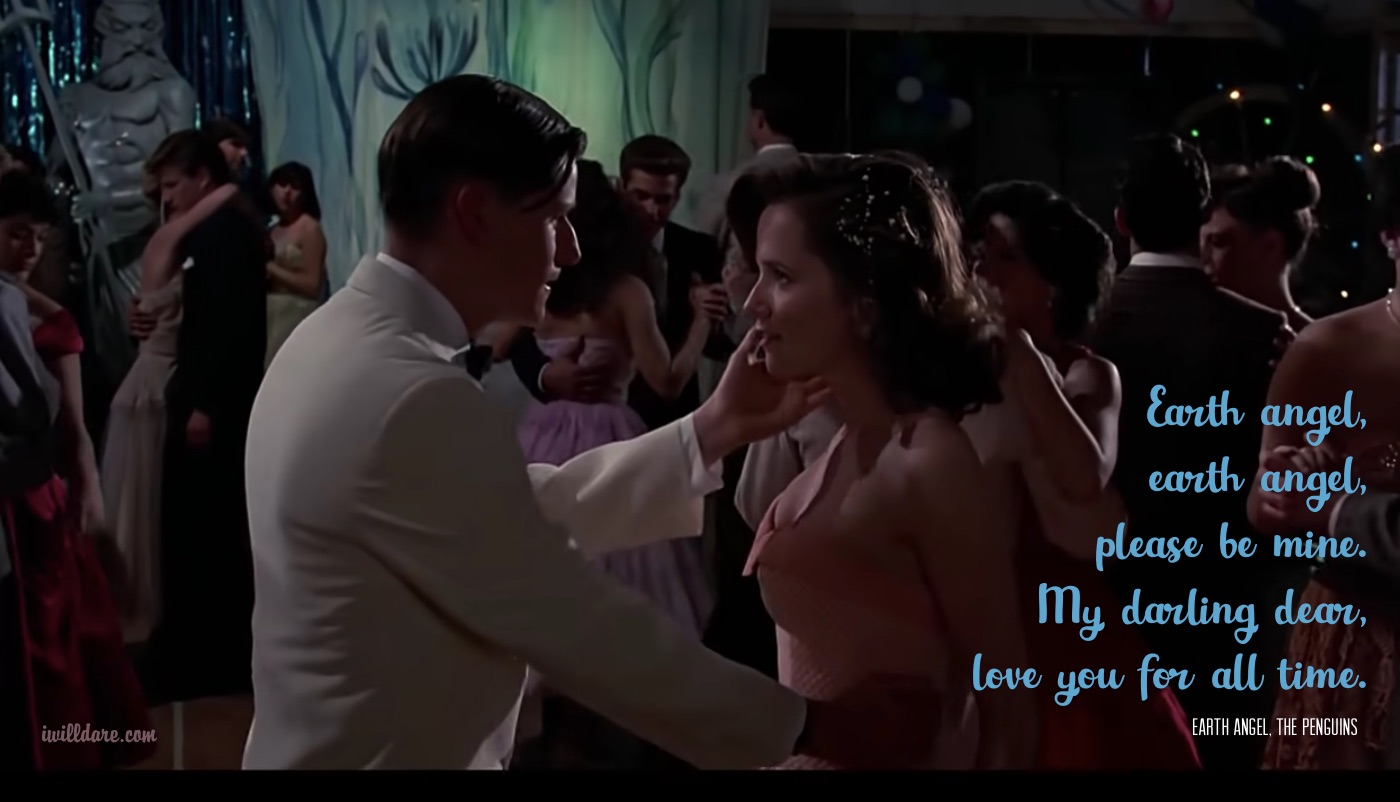 Sometime this weekend I started reading Girls Like Us: Carole King, Joni Mitchell, Carly Simon–And the Journey of a Generation by Sheila Weller. I’m kind of ambivalent about it thus far because I have read a lot about these three women and so there is not a lot of brand-new-to-me information.

There’s some new info, like Joni Mitchell’s first husband was kind of a dick and so was Gerry Goffin. I’m only about half way through and I suspect the gettin’s about to get good.

Yesterday while reading, I came across a passage that had me sitting bolt upright on the couch as my brain fizzed and made a pop cultural connection I didn’t expect.

Here’s the passage:
“‘Earth Angel’ was a breakthrough for us,” Barbara Grossman Karyo remembers, expressing a widespread feeling among girls about the song, which after various releases, became hit in 1955 and 1956. “Slow dancing to ‘Earth Angel’ was the beginning of our sexual awakening.”

I don’t know about you, but I have seen the movie “Back to the Future” about 834 times since its release in 1985. That’s probably a conservative estimate. I love me some Michael J. Fox. I once spent most of Christmas putting together a LEGO DeLorean. I have Doc & Marty Funko Pops. I might need an Enchantment Under the Sea Dance poster. The jury is still out on that one.

Also, I would argue the Back to the Future trilogy is the best trilogy Hollywood ever made. Before Sunrise/Sunset/Midnight is #2. Your hobbits and jedis and archaeologists and godfathers can go to hell. I said what I said.

When I was reading what Carole King’s teenage best friend said about “Earth Angel” being the beginning of their sexual awakening my mind immediately shot to the penultimate scene in “Back to the Future.” You know the one.

I would like to make a correlation between that scene, my adoration of Michael J. Fox, and my personal sexual awakening, but we all know that happened when I saw Matt Dillon in “The Outsiders.” So the soundtrack to my sexual awakening is probably C. Thomas Howell saying, “When I stepped out into the bright sunlight from the darkness of the movie house, I had only two things on my mind: Paul Newman and a ride home.” Nowhere near as cool as “Earth Angel.”

Do you think the makers of Back to the Future picked that song for that scene because of its sexual awakening powers? I did some cursory googling but got nothing. I didn’t try too hard because I have a stomachache and I need to get back to laying on the couch and moaning softly about it.

I’m gonna pretend the makers did know and chose the song on purpose because it makes me like “Back to the Future” an eensy bit more than I did before.