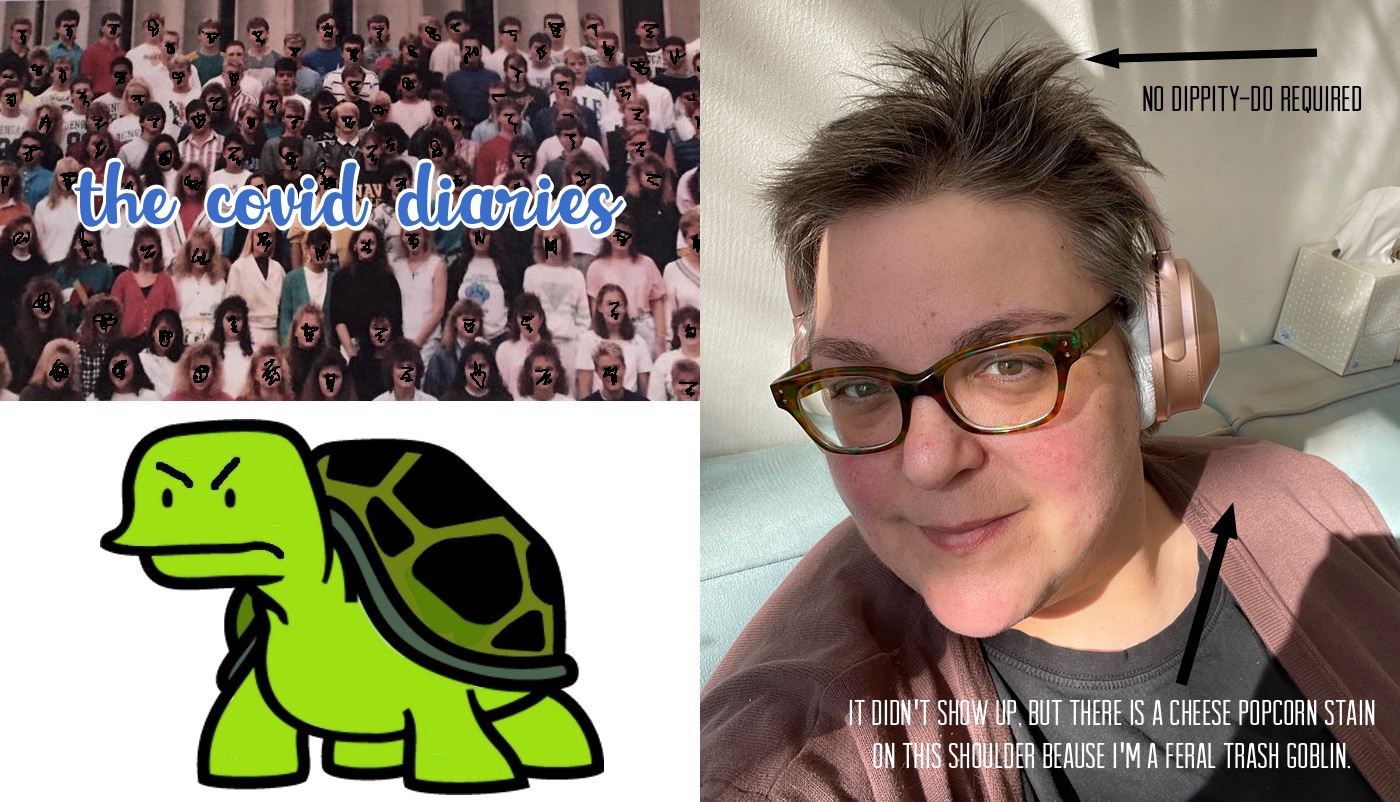 You’ve all probably been wondering, where is Jodi’s hair at these days? It’s been months and months since we had an update on this very vital topic we all care about so deeply.

I’m here to tell you, Darling Ones, it ain’t pretty. I’m rocking both a mullet and some picket-fence side spikes, and it is confusing. This is a hairstyle that was popular with both the 80s skater boys I had crushes on in junior high and all the dirtbag fuckers who bullied me back then. I’m oddly attracted and repulsed by my own head.

To be perfectly frank, that’s probably the story of my entire life regarding my appearance. I’m forty-eight years old and I feel like I should be past vanity and caring about what I look like, and yet. . . This is all the more frustrating because I barely care about it to begin with. I’ve never worn makeup. I don’t shave anything. I stopped coloring my hair in like 2015? 2016? I haven’t worn deodorant since 2009. And fashion? I don’t even know her. I never have and that’s fashion’s fault because I might have cared if anyone wanted to cater to the whims of a 6’5″ fat woman.

And yet.
And yet.
AND YET I can’t seem to totally let it go. Yesterday I zoomed with my friend Meagan and we discussed aging. I told her that I better feel something momentous when I turn fifty or I’m gonna be pissed. Maybe the momentous thing will be giving up the last tiny fuck I give regarding my appearance because it is exhausting.

Last week when I listened to Liz & Ani talk, they discussed this passage from Ani’s memoir:
“For a girl, the fear of not being pretty is the fear of not being a valuable object, which is the fear of not being loved. It is a conflation that is instilled so early on and runs so deep that, even when you know it’s a fear perpetrated by patriarchy, goaded by fashion magazines, and used to manipulate you into buying stuff, you still can’t stop the way it affects you. Being a woke feminist doesn’t mean you’ve overcome it, it just means you’ve learned to live with your perpetual self-loathing and your anger around it, too.” ~ No Walls and the Recurring Dream, Ani DiFranco

Even though I had a lot of issues of Ani’s memoir, she’s so right on this count. I’m angry about my own self-loathing regarding my appearance and how I blame it for my inability to attract and keep a man. And yes, it’s 100% the fault of my appearance and not my ice robot heart or indecisiveness or smorgasbord of other quirks & defects. Afterall, my aunts and great aunts and my mom all told me my entire life that at least I have a good personality so obviously it is not the fault of my impeccable personality.

What the actual fuck is that bullshit, Jodi Chromey?

So yes, the great hair grow out of 2021 is going swell and not causing me any kind of angst whatsoever. I’m glad you all asked,
Jodi

P.S. I read two really wonderful things today that took my breath away.

First, Gina Frangello one of my favoeite writers, pointed out a poem by Jill Alexander Esbaum called The Men We Marry, the Men We Fuck. It includes this line which slammed me right to the floor,
And he was as handsome as he was doomed.
Lovely as lust, but fickle as the moon.

That “lovely as lust, but as fickle as the moon” makes my pulse race. It’s so good. I’m like the character in the Tobias Wolff short story Bullet in the Brain repeating the line over and over. Seriously, say it out loud. It’s magnificent.

Second, was If My Body Were a House by Emrys Donaldson in The Rumpus, which grabbed me from the first sentence, “my body is electric with desire when I realize I haven’t been held for months” and never let go.