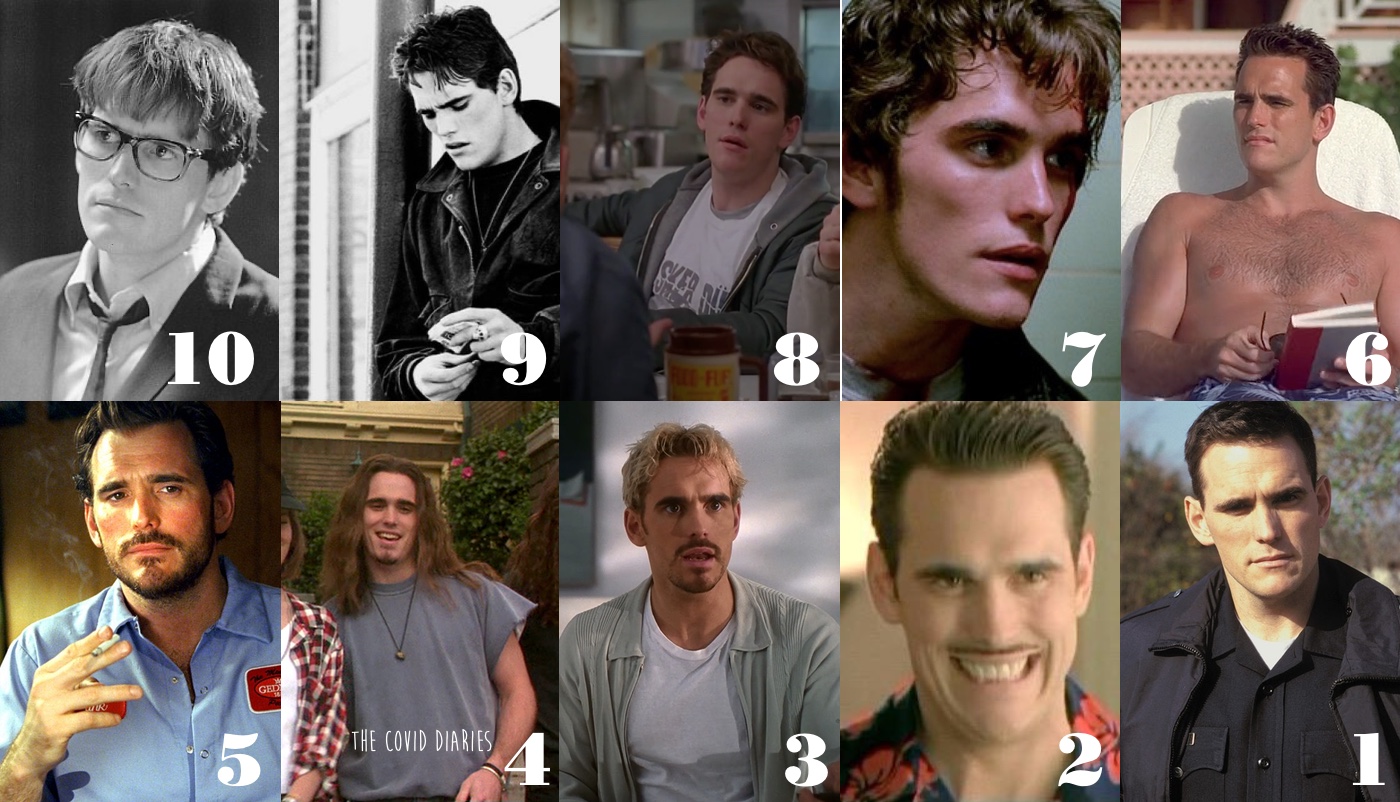 I have inadvertently thought about Matt Dillon a lot the last week. It’s not something I planned. It’s just something that happened, a happy accident for sure.

After yesterday’s letter one of my Twitter pals asked me where “Beautiful Girls” Matt Dillon landed on the Matt Dillon Attractiveness Scale. I had to think fast, because until now, the scale had not been well documented and I had put about 39 seconds of thought into it.

However, today I had nothing but time to think about it because I stopped sleeping at 4:30 a.m. and was downstairs making breakfast at 6. Plus, after talking with my youngest sister about Thanksgiving* I needed something to cheer me up. And, let me tell you, nothing cheers a woman up like looking at pictures of Matt Dillon and saving them to a folder on your desktop like some sort of creep.

Without further ado I present. . .

10. Grace of My Heart Matt Dillon

Bestill my heart. Bespectacled rock & roll Matt Dillon cannot be topped. I like to imagine this is what he looked like when he wrote his liner notes contribution to The Replacements “All For Nothing/Nothing For All” greatest hits rarities compilation that came out in the 90s. Matt Dillon + The Replacements? Yes, I did have an orgasm for about a month. Also, not gonna lie, this gets bonus points because “Grace of My Heart” is in my top 10 all-time favorite movies.

Oh, Dally Winston how I love you. “The Outsiders” movie was kind of a conundrum for young Jodi Chromey. See, in the book version my heart belonged to Ponyboy Curtis. However, my head turned once I saw Matt Dillon as Dally Winston. DAMN. It was like Fonzie x 10 + 10 to the tenth power. Fonzie was the first man who made me realize I wanted to kiss boys. I had many fantasies about being Pinky Tuscadero rescued by Fonzie during the demolition derby and then getting to kiss him. Most of my sexuality followed a Fonzie-like trajectory (James Dean, Dally Winston, Adrian Zmed in Grease 2) until River Phoenix came along and fucked my shit up.

I’m just now realizing that Matt Dillon is in two of my top-10 all time favorite movies. Anyway, he wears a Husker Du t-shirt in this one, and a little later on he wears a Soul Asylum shirt, and jesus christ, I am only human!

While I know I’ve seen this movie a bunch of times, I could not tell you what it’s about. I can probably say that about most Gus Van Zant movies I’ve seen (My Own Private Idaho, anyone?). What I can tell you is that I would die happy living cradled in Matt Dillon’s Cowboy cheekbones.

He’s shirtless and reading a book and holding glasses. At some point in this movie I think he makes out with both Denise Richards and Neve Campbell. Maybe he plays an English teacher?

As I get older I like my men with a little bit of the grizzle about them. I want some creases in the face, some snow in the beard (though in this picture he doesn’t have that, but you know what I mean). It’s one of the reasons I didn’t include Little Darlings Matt Dillon. It made me feel too fucking gross, kind of like how gross the movie made me feel when I first watched it as a teenager. Yuck. Bonus trivia: Factotum is the 2nd Matt Dillon movie on this list filmed in the great state of Minnesota, and scenes from this stinker were even shot at Canterbury Park not far from where I live now.

Up until this point all the Matt Dillons on the list are fucking hotter than a million suns. Let’s not kid ourselves. It’s only now, at #4 where we take a turn for the “eh, maybe if I was super lonely, Paul Rudd wasn’t returning my phonecalls, and I had some gin in me.” Really, Cameron Crowe how hard did you have to work to make Matt Dillon unattractive?

3. In and Out Matt Dillon

2. Something About Mary Matt Dillon

One, zero, negative a billon, don’t talk about it again please. This movie is racist trash and not even Matt Dillon can make a cop sexy. Barf.

I think I might rate all the things on the Matt Dillon Attractiveness Scale from now on. This pandemic? Crash Matt Dillon. Frightened Rabbit’s “The Midnight Organ Fight” record? Grace of My Heart Matt Dillon. Plain M&Ms? Factotum Matt Dillon.

*Sister #4 and I debated our Thanksgiving plans today and whether or not we should have it. I said yes. We’re all quarantining until then and so we should be safe. There’s only going to be six of us total. Making this decision has caused me more than a little anxiety. Thanksgiving will be the first time I spend in the presence of humans since November 8th. Hopefully nobody dies.