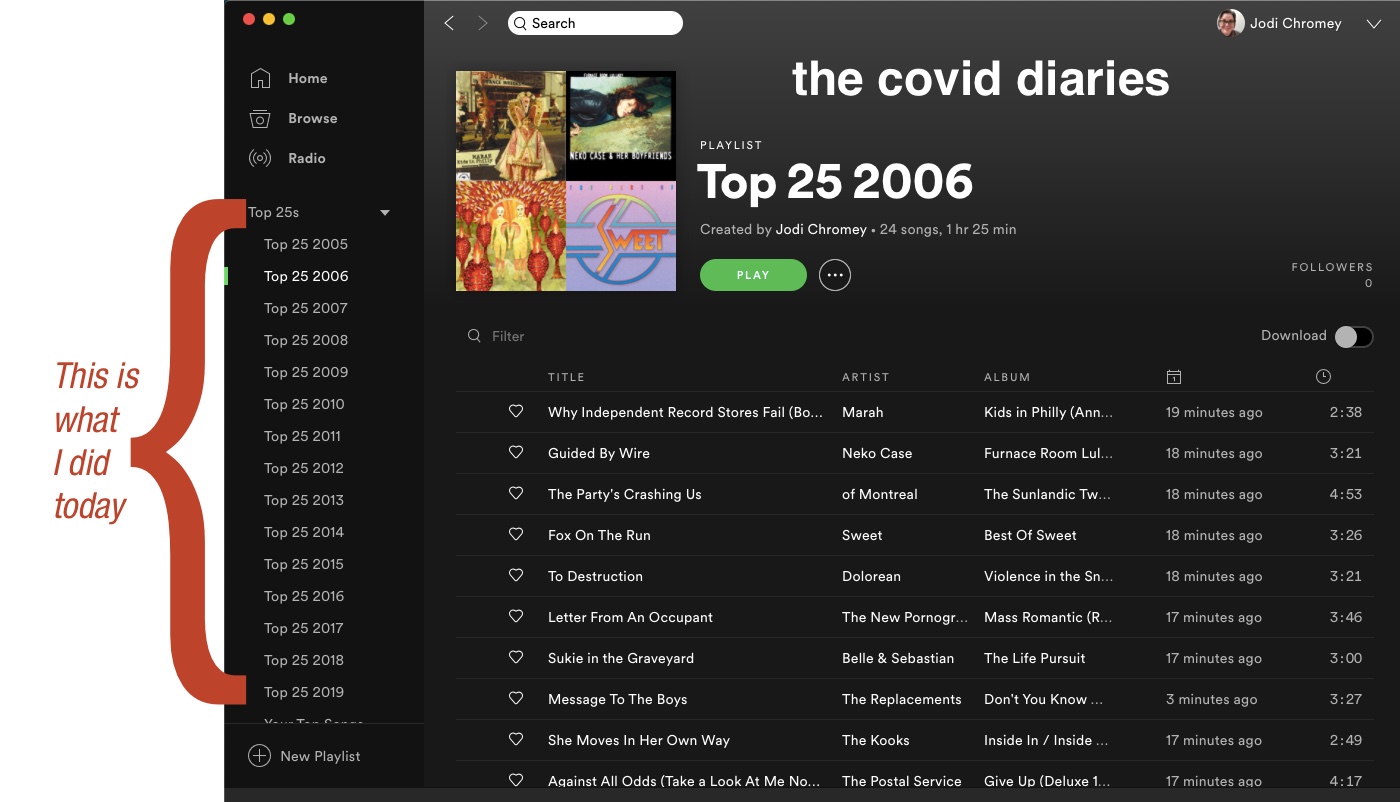 I spend roughly six to eight hours a day listening to music. This isn’t an exaggeration. I usually put my headphones on as soon as I’m done with breakfast and don’t take them off until it’s time to make dinner. Sometimes I put them back on after dinner. It’s why 90% of my selfies include headphones, my hair has a permanent headphone divot in it.

My sisters laugh at me because I wear headphones all the time even though I’m the only one here and I won’t disturb anyone with my loud rock & roll music. I like them. I find it nearly impossible to work without headphones on. I blame all those years in corporate America.

After rediscovering The Kooks, I decided to take a stroll through the music I loved in 2006 via my Top 25.

For many, many years I would keep track of the Top 25 most-played songs in my iTunes. It is a wonderful time capsule and as I was perusing 2006, I wished I had kept up with that. I had kinda given up the ghost when I stopped using iTunes in 2012.

Since I only had 30 minutes of work to do today (for real, the lack of work is killing me) guess what I did? I logged into last.fm and then I created seven years worth of Top 25 lists. It was the most fun I’ve had, well, I had some fun when I woke up at 6 a.m. this morning and couldn’t get back to sleep, but other than that it’s the most fun I’ve had all week.

So far. I think I might watch “Twister” tonight while eating a frozen pizza, because this spinster knows how to party.

It was fun watching my musical taste evolve. The early aughts lists are very dude dominated and you can watch them virtually disappear once the Turnip was elected. You can also tell when I switched from just listening to songs to listening to entire albums. Here, I’ll show you, these albums show up nearly in their entirety on that year’s Top 25:
2010: “The Wild Hunt” by Tallest Man on Earth
2011: “Wild Flag” by Wild Flag
2012: “Gossamer” by Passion Pit
2013 “Southeastern” by Jason Isbell
2014: “Somewhere Else” by Lydia Loveless
2015: “Short Movie” by Laura Marling
2016: “My Piece of Land” by Amanda Shires
2017: “The Nashville Sound” by Jason Isbell & The 400 Unit
2018: “Historian” by Lucy Dacus (Though Phoebe Bridgers’ entire “Stranger in the Alps” is on the list too)
2019: “The Highwomen” by The Highwomen

2008’s list is probably my favorite because it makes no sense. It’s The Decemberists, Liz Phair, The Hold Steady and then randomly “Peg” by Steely Dan. Who was I?

The one thing I tripped over that broke my stupid heart was Ryan Adams’ “Dear Chicago” showing up six times over the years. I fucking love that song and I have failed thus far at carving it out of my heart. It’s so hard to do and something I struggle with when I have fallen in love with art made by men who turn out to be bad people. Like, I get that he is a dirtbag extraordinaire, but my heart doesn’t nor do all my memories and associations with this song. WHAT AM I SUPPOSED TO DO?