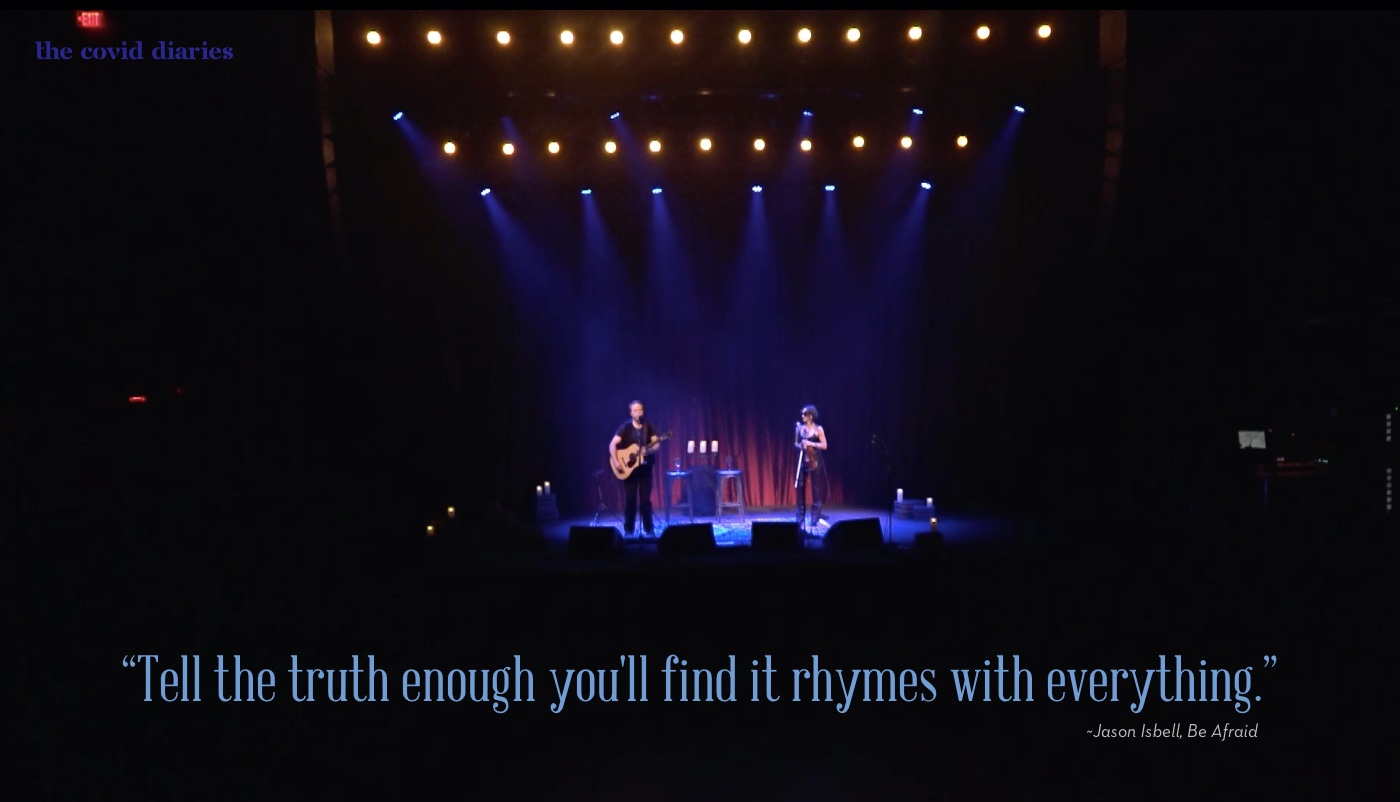 Jason Isbell is probably one of the best songwriters alive. Yeah, the same list with Joni Mitchell and Bob Dylan. I’m not messing around. I say this having listened to Jason Isbel & the 400 Unit’s new album “Reunions” about 33 times since it came out on Friday.

The lines in “Be Afraid,” which I didn’t take to when the single was released slay me now. It wasn’t until I watched the Isbell/Shires lie stream on Friday that the line, “tell the truth enough you’ll find it rhymes with everything” jumped out at me. All credit goes to Amanda Shires and her incredible voice.

Before that night it was the line, “And if your words add up to nothing then you’re making a choice to sing a cover when you need a battle cry.” I love this sentiment as it applies to all modes of creation. Like, I dig goofy memes as much as the next person, but I’d much rather see something you wrote. Our internet society is all about doing covers. I want more battle cries.

Anyway, I came here not to praise Isbell but to whine. Yup. No battle cries here just petty whining about things that annoy me even the tiniest bit. As I told my friend Em on the phone yesterday, “I just want people to do what I want them to do when I want them to do it. IS THAT TOO MUCH TO ASK?”

Amongst my petty grievances are not knowing what to make for dinner ever and not being hungry for anything in particular. Last night I whined to my nephew, Maxwell, that I feel like we just had everything. He agreed. Dinner: it’s what’s bugging the shit out of you.

The online dating app has been a fucking trainwreck. One man sent me paragraphs and paragraphs about fighting for my life and bravery, because my shaved head made him assume I have cancer. Cancerman also spent a lot of time going on and on about how much taller I am than he is (11 inches) and that was a giant red flag. Another man said, “Hey Sexy” and I just told him to do better.

Anyway, I did come here to whine, but not about the endless annoying miasma that is pettiness in the time of pandemic, but about something specific and Isbell-related.

Here’s the thing, he uses the word “appetite” in two of the first three songs on “Reunions.” Each time the word comes up there’s a record scratch in my brain and I make a shitty Veruca Salt face. The word calls attention to itself and it pulls me out of the song for a few seconds. I like to maintain a fictional dream ala John Gardener (and yes, I recognize I’m mixing literature and lyrics, but they’re both writing and also this is my website I can do what I want to).

In “Only Children” there’s “fighting my appetite” and on “What Have I Done to Help” it’s “and showed up to work on time and watched my appetite.”

I just have to accept that he loves the word because it’s also there in “Traveling Alone” off of “Southeastern,” “damn near strangled by my appetite.”

And if you go way back off of the self-titled record there’s “you pray that I banish my appetite and lie there alone” in the song “Sunstroke.”

The one good thing about Isbell’s continued use of the word appetite is always reminds me of my writing teacher Dale Gregory Anderson who taught us that certain words you can only use once a story. He was talking specifically about one student writer who used the phrase “apricot moon” twice in their story. DGA said it’s a great description but it becomes less so with repetition.

Isbell’s lucky he’s one of the best songwriters alive because he can get away with the repetition. However, I’ll still be making the Veruca Salt face every time the word comes up, because that’s who I am. Except, for in “Traveling Alone.” That’s where he uses the word the best and that line is great.