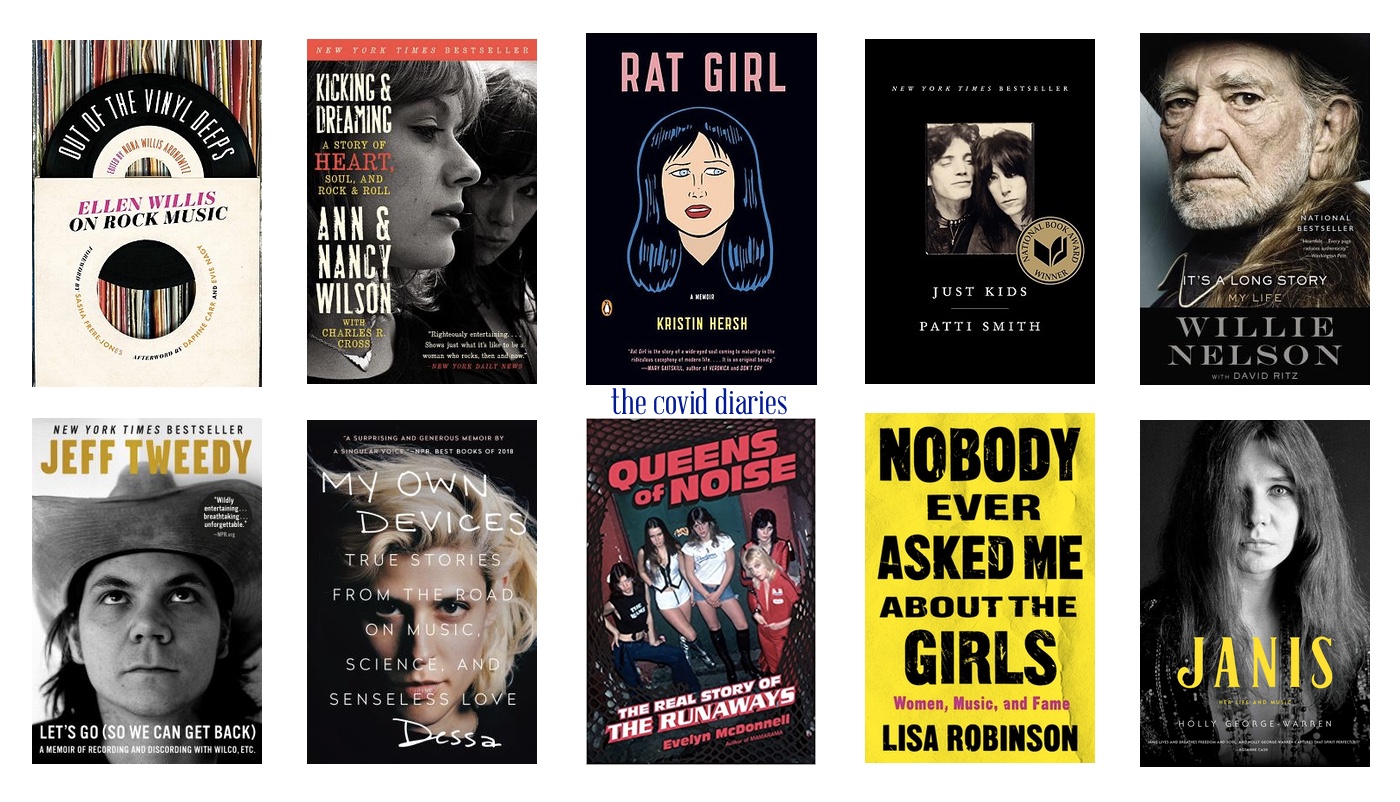 While I was doing my taxes last night one of my twitter pals expressed an interest in my Top 10 Music Memoirs List. Because the only two things I need to do are make potato salad and work on The Beast, making this list is what they like to call productive procrastination.

Before we get to the list, I broadened the category. I’ve read a lot of memoirs by musicians. A lot. Maybe forty? Fifty? I’ve read twenty-six memoirs just by female musicians. Tonight I’ll be starting Crying in H Mart by Michelle Zauner. I’m on the library’s hold list for Brandi Carlile’s Broken Horses.

I’ve also read memoirs by men too. From Keith Richards and Pete Townshend to Bob Mould and Ben Folds.

Here’s the thing, a lot of musician memoirs are shockingly similar. The only thing that really changes are the dates. So yeah, I broadened the category to include nonfiction books about music or musicians.

One more caveat: I did not include Trouble Boys Bob Mehr’s biography of The Replacements because it is fucking boring. Scandalous! But if you really want to know where everyone who ever met the ‘Mats was born and where they went to high school, this book is for you. Did you know Tommy Stinson’s grandma was from Shakopee? You would if you read Trouble Boys.

Also missing is Michael Azerad’s Our Band Could Be Your Life, which I need to revisit. It’s been nearly twenty-years since I read it, so my memory may be fuzzy, but I’m pretty sure there are absolutely zero women in the book. None. I know none of the bands featured include women, so it doesn’t make the list.

I only mention these two books because they’re the ones I expect to get the most flack for not including. Also, one more emptive shut-up. Yes, I know about Lester Bangs. And Robert Christgau. And Greil Marcus.

This book changed the way I think about and consume rock & roll. I read in the spring of 2012 and it caused a paradigm shift in my soul. I often joke that I’m unsure about God, but I believe in Ellen Willis and thus she is my deity of choice. What I love about her writing is the social and political context she gives the music she writes about. And it’s so refreshing to get that context through a feminist point of view (rather than the male sexual gaze)

2. Kicking & Dreaming: A Story of Heart, Soul, and Rock and Roll by Ann & Nancy Wilson

This one is so damn fun. I love that Ann and Nancy tell the story of Heart. I love that we learn there is another Wilson sister who is not in the band. I love the stories of pre-grunge Seattle and touring with ALLLL those dudes. I love that they talk about sexism and fatphobia and being in Seattle right before grunge broke. But my favorite is they are the first of all the women I’ve read who talked about wanting to be a Beatle and not marry a Beatle (this is a recurring theme in a lot of memoirs by women).

Quoting myself here: “If you’ve ever felt music was your religion or your life or had a deep, confusing, inexplicable relationship with Rock & Roll you should read this book. While I believe Hersh’s relationship with music is wholly unique to her, she writes about it in such a way that it gives those of us who have yet to find the words hope that those words are still out there.” She has a new memoir out too. My cup overflows.

Come on! This probably the most lauded, awarded music memoir of all time. Justifiably so.

5. It’s a Long Story: My Life by Willie Nelson

Wanna know what’s so good about Willie Nelson’s memoir? He leaves out all the boring shit. This doesn’t happen a lot when men write their stories (see: Townshend, Richards, Mould). It’s folksy as fuck and has so many fun facts! Charlie Pride sent him his first email! Tons of ’em about “Pancho & Lefty” I won’t spoil for you. It’s a super fun read.

6. Let’s Go (So We Can Get Back): A Memoir of Recording and Discording with Wilco, Etc. by Jeff Tweedy

Hi. I feel like I have not shut up about this book since I read it in March. I talk about it a lot, almost as much as the Sylvia Plath biography. This one is such a great read because Tweedy is funny, self-deprecating, a little catty, totally vulnerable, and smart.

7. My Own Devices: True Stories from the Road on Music, Science, and Senseless Love by Dessa

You know that sentence that I wrote about the Jeff Tweedy memoir? Same goes for the Dessa minus the catty but make the smart, super smart. I’ve read this one three times. There’s a passage where she writes about singing with Aby Wolf that when I read it I get goosebumps and when I talk about it to people my throat clogs with tears. It’s that beautiful.

8. Queens of Noise: The Real Story of the Runaways by Evelyn McDonnell

I fell in love with Joan Jett when I was eight or ten or whatever age it was I discovered her cover of “Crimson & Clover.” I fell hard. So hard that at my 40th birthday party, childhood BFF Jodi Hanson glared at my cousin Laurie and asked, “Were you the one with the “Crimson & Clover” forty-five?” I played the song a lot. This biography of The Runaways blew my mind. There was so much I didn’t know and, again, McDonnell gave me so much context for the band I didn’t have before.

9. Nobody Ever Asked Me about the Girls: Women, Music and Fameby Lisa Robinson

This book is a lot. There’s an entire chapter about rape and sexual assault and how that played out in some women’s music. There’s also chapters about marriage and sex and babies and Lisa Robinson never fails to point out the hypocrisy in how men never get asked these kinds of questions. Go for the Madonna-snark and stay for the keen insight on how female musicians are portrayed in the media.

10. Janis: Her Life and Music by Holly George-Warren

I think this book was so revelatory because it was the first time I experienced Janis outside of the male gaze. George-Warren presents her as a flawed, complicated woman with all the care her story needed and never seemed to get.

For now, it’s time to make the potato salad,
Jodi