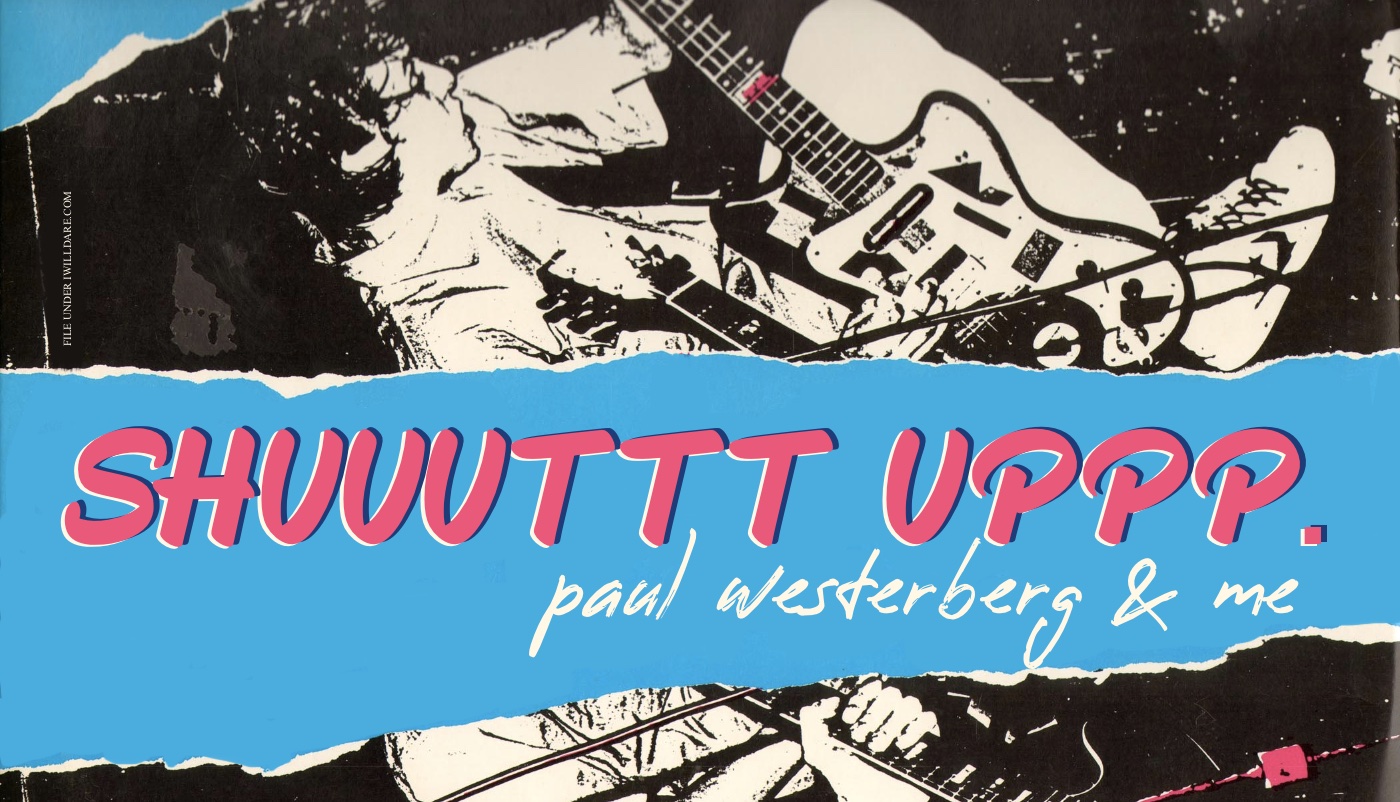 Recently I made a joke on Twitter about how Paul Westerberg owns about 27% of my brain. His lyrics live in my synapses and they fire off without warning all the time.

I realized to what extent this happens on Sunday when The Youths and I were shucking corn for dinner. As we were peeling back the husks to get to the silk I was all, “Rip, rip we’re gonna rip them out now.”

They both looked at me puzzled.
“It’s the Replacements,” I said. “Tommy Get’s His Tonsils Out.”

Today as I was watching Wendell chitter at a bird out at the feeder I said to him, “This is the biggest thing in your life, I guess.” That’s when I decided to make note of how many of these lyric snippets I use on a near daily basis.

Here are the ones, off the top of my head, that I’ve incorporated into my personal vernacular.

I probably use quote/sing this one the most, at least once a day both It’s the biggest thing in my life, I guess and It’s too late to turn back here, we go. I use the latter whenever I’m about to start working for the day.

You know my term of endearment for you comes from this song, DON’T YOU? The song is so-so at best, but you are fucking fabulous.

Ain’t lost yet so I gotta be a winner. I say this one a lot when it’s time to make dinner. I don’t know why it’s this line instead of the fingernails and cigarettes part.

Shuuuttt Uppp. I use this one my friend EM all the time whenever she’s pointing out when I’m being slightly (or majorly) irrational. It never fails to make her laugh and I don’t even have to say anything else because she gets it. This is the best one.

These two are so much a part of my personal vernacular that it feels stupid to include them on this list. I mean it’s just so obvious. Don’t all ‘Mats fans use these every day?

You’re in love & I’m in trouble. I use this one on Wendell when he wants me to pet him and I am using my hands for other things like working.

Phony rock & roll. I say this any time someone is talking about music by a musician I do not care for. Also songs I don’t like. Also any time Gwen Stefani is forced into my consciousness.

God what a mess. This one is used frequently, especially if I’m cleaning up some actual physical mess. It’s all in the delivery.

Left of the Dial

Pretty girl keep growing up, playing makeup, wearing guitar. I say this one every time I go to the bathroom when I look cute because I have to stare at myself whenever I use the downstairs bathroom. The sink & mirror are right across from the toilet. It’s a small bathroom. There’s nowhere else to look.

Are you strung out on some face? Well, I know it ain’t mine.
Same scenario as above only when I’m not cute.

There are probably about sixty-eight more, but they aren’t coming to me right now, probably because I don’t use them a frequently as these ones.

I’ll write you a letter tomorrow. Tonight* I can’t hold a pen,
Jodi

P.S. Back in the olden days of the early aughts I had a popular post on the Westernerd message board called “Random Replacements’ Sighting of the Day” where I would chronicle every time I ran into the ‘Mats music unexpectedly. This is kinda like that, but the unexpectedness comes from my own brain and not TV shows or muzak.

*Technically it’s afternoon. Also I can hold a pen. Probably will be able to do that tonight too.