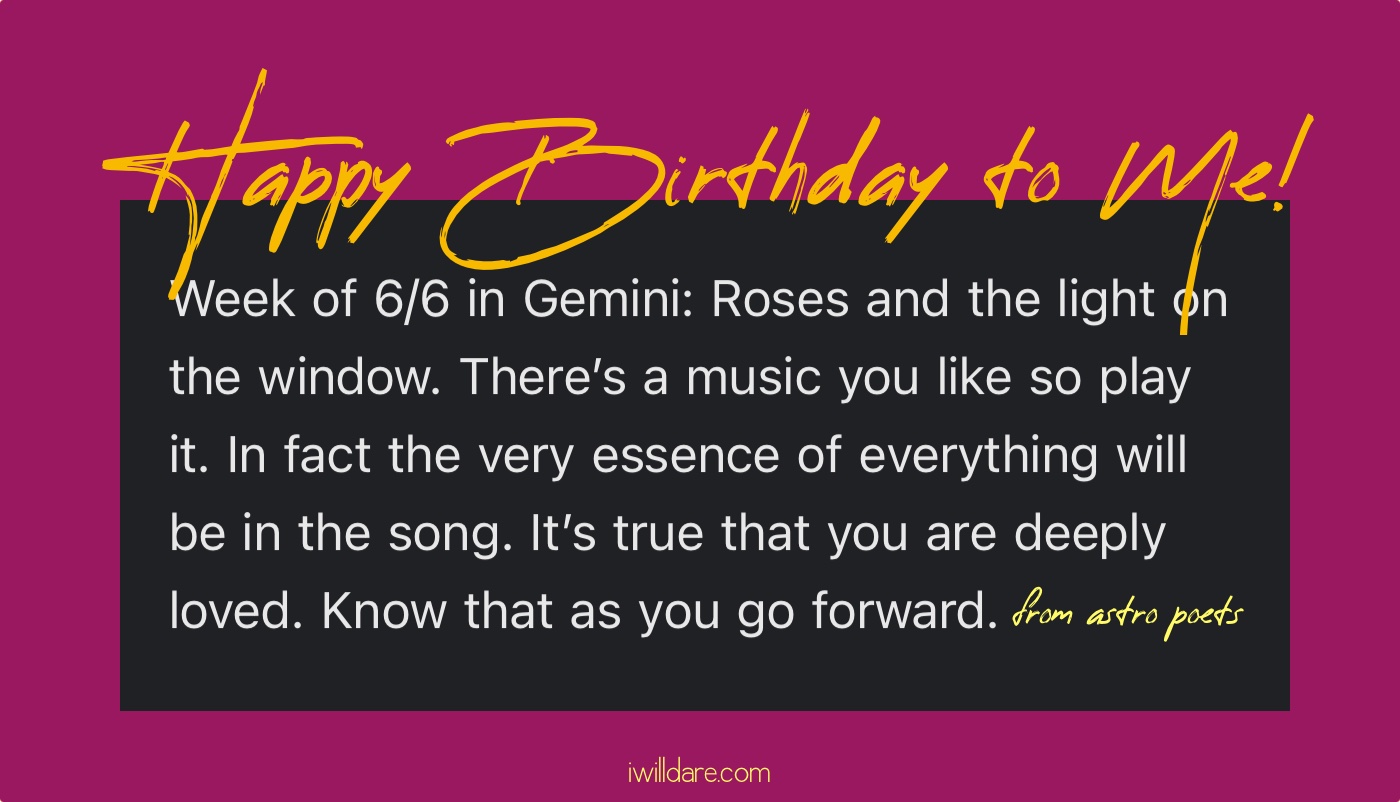 Today, June 6th, is my birthday.* I am forty-nine years old. It is the last birthday of my forties.

The first thing I did this morning when I woke up at ass o’clock in the morning was grab my phone to see what kind of greetings had flooded in while I was sleeping. Being that it was 5:37 a.m. there were none, but a lone email from Astro Poets with my weekly horoscope, pictured above. It made me cry. It’s been a long lonely year. Then I got up, moved the laundry from last night to the dryer, started another load, and went back to sleep for another three hours.

On Friday my friend EM called to wish me a happyish birthday because she knows I’m being a little weird about it this year and that my family is coming for dinner which means I should be busy cleaning my house before their arrival (I am not). We got to talking about high school because today is also the 31st anniversary of my matriculation from that hellscape.

“Can you imagine how much it would suck if you peaked in high school?”
“I didn’t peak,” she said.
“Well,” I said after a pause. “I haven’t yet. I mean, I still could. Maybe my best years are ahead of me.”
EM was silent on the other end of the phone.
“COME ON!” I shouted. “I’m just getting better with age. I’m funnier now than I’ve ever been in my entire life,” I said as proof.
She laughed.

I rest my case.

Since then I’ve been thinking a lot about peaking or what it means to peak. Is it when you’re at your happiest? Your most fulfilled? Your cutest? Sexiest? Smartest? Richest? When we say that someone peaked in high school do we mean that’s the best version of themselves they’re ever gonna be? And if it is boy, we have a lot of unresolved high school issues don’t we? That’s a shitty thing to say about a seventeen year old.

Maybe we never peak? Maybe we’re always peaking? I have not given this near enough thought. I haven’t peaked yet. I feel this in my gut. So, you’re in luck, Darling Ones, it’s all up from here. Right? RIGHT?

Ain’t peaked yet, so I gotta be a winner,
Jodi

P.S. Tonight my nephew told me about some poor-quality Heart bootleg he found which he can’t stop listening to because they bring out both Stevie Nicks and Grace Slick. His excitement about this was my favorite birthday gift thus far.