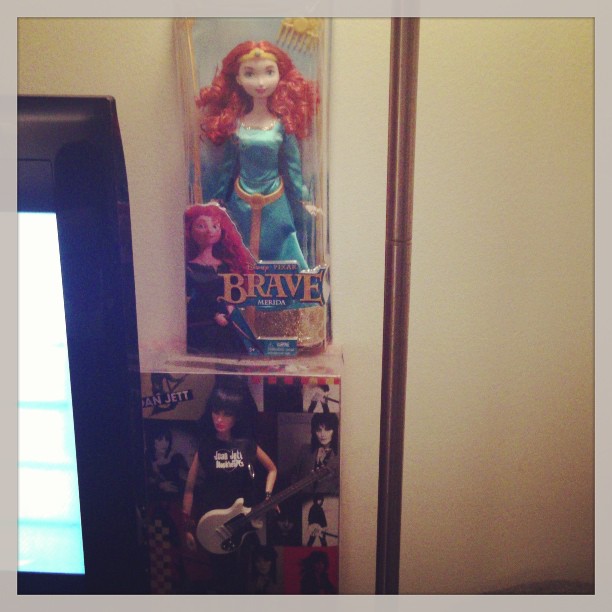 Yesterday, Sister #2 had a party for friends and family so that she could see a whole bunch of people all at once before she returns to Portland. One of the party attendees was my cousin Laurie, who as a teenager was the Sister Club’s much beloved babysitter. She’s the one who would play records for us while recounting going to the Northtown Mall with her boyfriend. Also in attendance yesterday was Jodi Hanson, unofficial Sister #5.

As we reminisced Laurie told us how she still had that little case of 45s she used to bring to our house all the time.

“Were you the one with the “Crimson & Clover” 45?” Jodi Hanson asked and then pointed at me, my sisters nodding their heads in agreement.
“I don’t know,” Laurie said. “I’ll have to look.”

In my memory, Sister #2 owned the 45 and she got it from my mom’s friend TJ. Who really knows? This was more than thirty years ago and we were young. Memories are get fuzzy. More than once this week I have proclaimed, “Oh my god, I forgot about that until right now.”

Earlier this week The Huffington Post ran a story reported by Justin Cherkis about Kim Fowley raping The Runways’ bassist Jackie Fox. The story tells, in explicit detail, how Fowley raped Fox in a crowded hotel room while people watched. Two of those people were, allegedly, Joan Jett and Cherie Currie.

This story was not new to me because I read Evelyn McDonnell’s biography of The Runaways a few years back. The fact that the victim was Fox was news.

Before I even read the HuffPo piece I saw my social media streams littered with people calling for Joan Jett to make a statement. It seemed in a matter of minutes the story switched from being about a man raping a drugged, nearly unconscious teenage girl to much scorn and derision on a woman about her actions from forty years ago.

I saw numerous people talk about how they’d lost all respect for Joan. Some were calling her a cunt. Some were decrying her feminism. None of those people, as far as I know, are experts on rape, trauma, or memory. All of them were really good at not seeing singers, specifically women, as flawed humans who make mistakes or people who may need a little time to process.

While I am often amazed at the lack of critical-thinking skills of people who call themselves music critics, this rush to judge Joan stunned me.

This “music critics” read one story and instead of damning the patriarchal constructs of rock & roll that allow men in power incredible control over young woman they rushed to damn Joan. Instead of pausing for just a millisecond to search their souls for maybe the teeniest bit of empathy, they had to be rush to be the enlightened rape-hater and judge everyone in that room. These people are the intellectual equivalent of people who argue that if we all had guns the mass shootings would never happen.

While I have never witnessed someone being raped, I did grow up in an abusive household where I saw my sisters being abused and I did not stop it even though I was bigger than my dad. Sometimes in that situation all you can think about is making it through to the next minute when it will all be over. Sometimes you get as small and quiet as you can so you don’t bring attention and abuse on yourself.

Sometimes humans do the best that they can with what they have.

I don’t know what happened in that hotel room that night. You don’t know. None of the fucking social media assholes who lost respect for Joan knows.

And there’s nothing we can do now besides off our sympathies for Fox, admire her bravery in telling her story, and maybe takes forty-five seconds before we rush to judge someone.