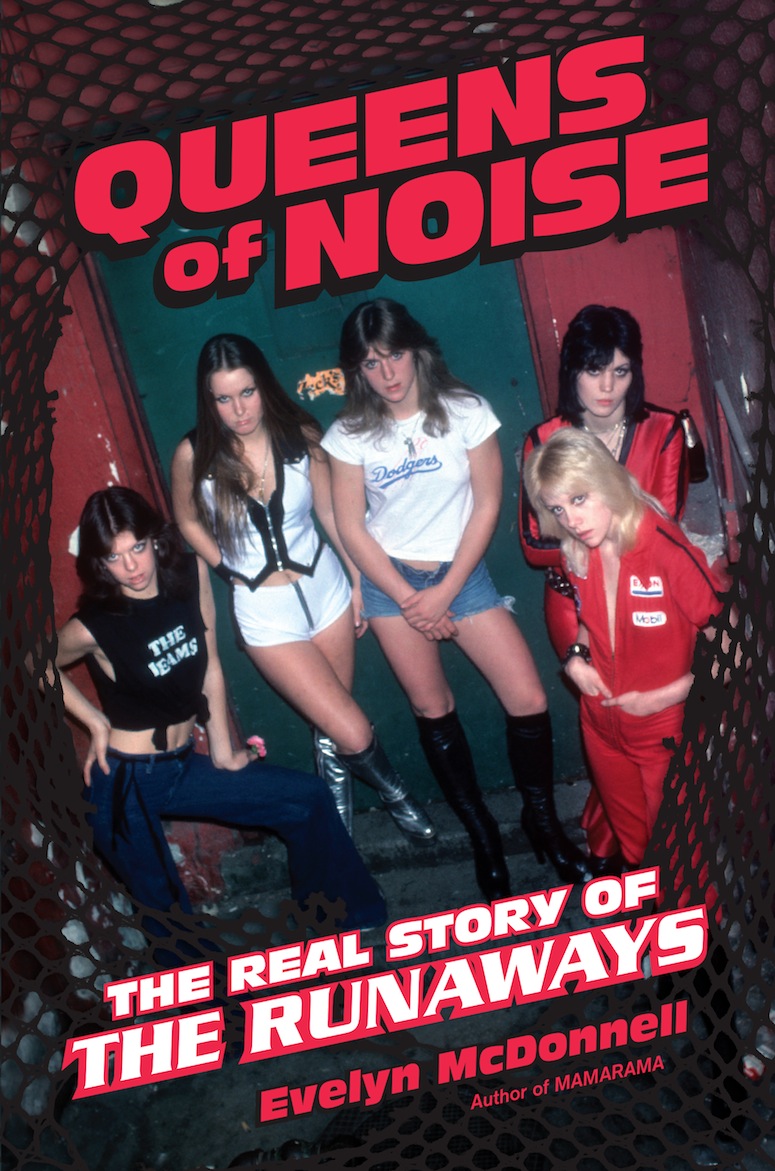 If I were a better eBook reader, I’d have probably finished Cherie Currie’s memoir Neon Angel and found a lot of the information in Queens of Noise:The Real Story of the Runaways by Evelyn McDonnell old news. Lucky for me I hate reading books electronically and found McDonnell’s biography of the ground-breaking all-female rock & roll band a revelation.

Oh how I loved this fair and not wholly unbiased book about the band that spawned Joan Jett. It helps a bunch that the way The Runaways came into being is so damn entertaining and the women who formed this band so awesome.

Kim Fowley, was a weird Los Angeles scenester who had a desire for fame and maybe a love for music, that never seems to be clear. He had some success writing and producing novelty one-hit wonders, but wanted more. In the oozing, hormone-addled glamrock clubs of the 70s Sunset Strip, Fowley decided he was going to put together a band of teenage girl to rival The Rolling Stones.

The catch was going to be their “jailbaitness.” Fowley was (and still is, he’s still alive) kind of mad, sick genius. He set about hitting up the clubs preying on underage girls who might have musical ability.

He found Joan Larkin and Sandy Pesavento. One was an East coast transplant with a guitar, the other a sunny California surfer girl who could drum like nobody’s business. Re-christening themselves Joan Jett and Sandy West, they formed the base of what would become The Runaways. Add in pretty, blonde Cherie Currie as singer; a buxom guitar virtuoso Lita Ford; and quiet, dark-haired Jackie Fox on bass, and you got yourself an all-girl rock and roll band.

Personal Aside: I hate the term all-girl or all-female band. It drives me crazy because it makes ‘band’ by default mean all-male. Nobody says ‘all-male band’ unless they’re talking about a boy-band ala One Direction or New Kids on the Block; and even that term is kind of riddled with condescension because the only people who like boy bands are teen girls (and in much of rock & roll history teen girls are considered the worst — sort of shorthand for vapid, screaming mindlessness. We often forget that teen girls made Elvis and The Beatles famous, so there’s that).

With his players in place, Fowley started to pull strings — treating the teens as his own personal playthings (both professionally and, occasionally, sexually). The girls worked their asses off to become a cohesive unified band and played all over the damn place before they landed their record contract.

What follows is a tale as old as rock & roll: sex, drugs, poor management, giant egos, money problems, and musical differences — and because they are young women, there is a heaping helping of sexism and misogyny (at one show the band Rush refused to let the girls sound check). McDonnell charts the sort-of rise (they never do become very famous, though they are often well-reviewed) and eventual dissolution of The Runaways, and she follows up with what happened to each woman as she left the band. It’s a story that is at times both frustrating and inspiring.

And it is all told by the players themselves. McDonnell interviewed the surviving members of The Runaways along with Fowley and various other characters involved in their story. She researched the hell out of this book, as can be seen in the meticulous bibliography. The best part of this book is that she offers up the often conflicting recollections of the band (and Fowley) without passing judgement on any of the players involved. However, McDonnell does pass some judgement, but she saves that mostly for the dude-rock establishment and the dude-rock journalists who cover it (and occasionally for Fowley too, but he deserves it because that dude has some messed up thinking).

McDonnell did her footwork and in doing so she presents us with a story about a band that should have been the female answer to The Rolling Stones, but instead ends up a footnote in rock & roll history.