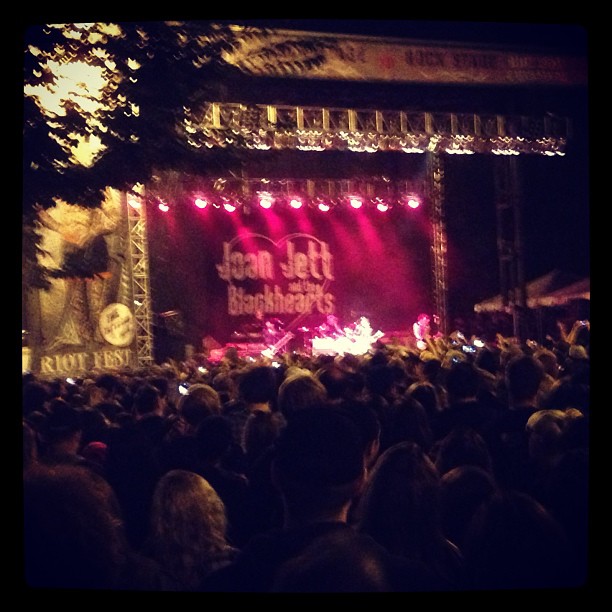 I cannot deny that my Joan Jett experience was marred by the fuckers around me. First of all, she played on a stage that was penned in on both sides. On one side we had the beer tents lined with people waiting for beer and not about to budge, and a fence on the other side. This meant that a very large amount of people were all jockeying for position in a narrow space. Generally, I’m not the person that needs to be at the front of the stage. I’m fine taking my 6’5″ self to the back of the crowd and enjoying the view from there. In fact, I usually prefer that because I once had a panic attack in the middle of a Rufus Wainwright concert at First Ave and have enjoyed the edges of the crowd ever since. 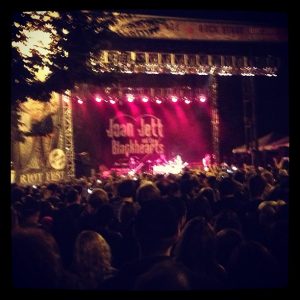 However, this was Joan Jett. And while I didn’t need to be in the first row I did want to stake out a semi-decent spot. The nerve!

See, I was already super annoyed before her set even started. I found a pretty decent spot next to a tree. My logic was, “Hey, a tree is taller than me, people shouldn’t complain too much.” Remember this, it comes back to play in this story.

Since Max was off watching GWAR, I was standing next to the tree by myself eavesdropping on trio of hipster twenty somethings — two young women and a dude. The young dude was insufferable, lecturing the women on all things Joan Jett like he was some kind of professor of Joanology. He was both incredulous and condescending at the same time. You know that dude. And the worst part was, he was wrong about half the shit he said. If I were a bigger asshole, I would have been all, “Actually, jackass, ‘Cherry Bomb’ was not Joan’s. It was written by Joan Jett and Kim Fowley and was the track 1 side 1 on The Runaways’ debut album in 1976. She didn’t even sing it, Cherie Currie did.” (Thanks Queens of Noise: The Real Story of the Runaways!)

I didn’t have time for too much scorn, because suddenly there she was. Joan Jett on stage in front of me and, I had tears to shed and songs to sing. The crowd stuttering through “Cherry Bomb” was pretty rad, and at one point during “Do You Wanna Touch Me” after Joan had asked the crowd to sing along I leaned over to Professor Chatty O’Bullshit who was saying something about the crowd’s singing and cracked, “When Joan asks you to sing, you sing.”

It was right after that when some jackass behind me had enough of the injustice of being stuck behind someone so gifted with the height and decided to climb the tree next to me. Only the tree next to me wasn’t really that big of a tree and all of the branches were well over my head, making them a good seven feet off the ground. However, this did not stop entitled jackass from shimmying up that tree and kicking me in the head in the process. It hurt. A lot. Did he apologize? No. Did he come out of the fucking tree? No. Instead, he perched up in the tree and rained down small branches and leaves upon the crowd underneath him. I can’t remember the last time I wanted to cause bodily harm to a stranger. In my head I kept thinking, “just grab his foot and pull the fucker down. Just do it. You can reach him and pull him down. DO IT!”

I was so angry and annoyed and claustrophobic at that point that I took the time during a song I didn’t know to head to the back of the crowd.

As I was fighting upstream, Joan started the intro to the next song. She was talking about the song and blah, blah, blah and how she invited a friend who was playing on Sunday to play the next song with her. I very nearly pooped my pants. My brain immediately went to her friend Paul Westerberg who was playing Sunday. You’d be amazed how much fan ficton you can write in the space between words. I wrote the War & Peace of fan fiction in the time it took her to introduce Laura Jane Grace from Against Me!

My disappointment was fleeting though, because by the time I made it to a safe space at the back of the crowd, in view of the jumbotron, she started ripping through a trifecta featuring “I Love Rock & Roll,” “Crimson & Clover,” and “I Hate Myself for Loving You.” And if there’s anything that can make you forget a possible head trauma and other minor annoyances, it’s those three songs played by Ms. Joan Jett herself.