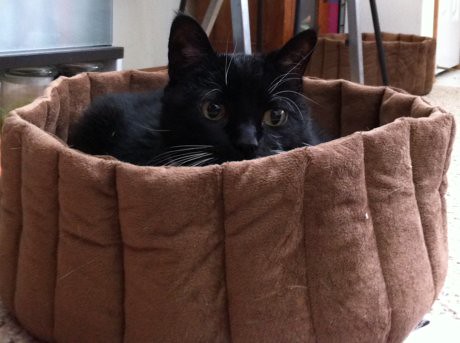 Back in January, I went over to BFK & Atom’s house for dinner. We had just polished off the pizza and were chatting about stuff the way people chat when, without any provocation that I can recollect, I launched into The Donut Hole Story.

The Donut Hole Story has quickly become one of the greatest hits in Supergenius Lore. Not because of greatness of the story but rather because of my propensity to share it without realizing it.

That snowy January evening I launched into The Donut Hole Story. I told BFK & Atom about how I had a package of donut holes on the counter. It was the kind of flimsy package that clicked shut, popular at the Cub Foods bakery. As the story goes, I was sitting in the La-Z-Grrl doing my thing when I heard a ruckus. I can’t describe the ruckus, but I know one when I hear one. It was a mild ruckus, not enough to cause me to rise from the La-Z-Grrl to investigate, but enough to cause me to look up from whatever I was doing. But then the ruckus was repeated and forced me to go see what the hell was going on.

What was going on? My fifteen-year-old cat, Madison (not pictured), had managed to open the donut hole box, flip one (there were at least a dozen in the box) onto the floor and was eating it.

About midway through the retelling of The Donut Hole Story I stopped, looked at BFK & Atom and screeched, “I’m telling a cat story.”
“Yeah,” Atom shook his head at me and gave me the kind of look you give to someone who has hit rock bottom and discovered why yes, they really are an alcoholic. “You are.”

The fact that I did not die from embarrassment right there is a testament to how comfortable I am with those two. I think it also indicates a rather important step in accepting my crazy cat ladyness.

Being a single woman of a certain age with a bookish persuasion, I have lived in constant terror of being labeled a Crazy Cat Lady. Married women who love cats, they somehow escape the CCL label even if they’re totally cat-crazier than the single ladies (*cough* Sister #2 *cough*).

There’s nothing attractive or interesting about a CCL. Once you get stuck with the CCL label it’s all downhill. No, once you’re labeled a CCL you’re at the bottom of the hill. There’s nowhere lower to go. Maybe the grave, but that’s about it.

But telling people random stories about your cats? That’s like the sixth step to CCLhood. The first five? I passed them all long ago.

Today I marked another milestone in my journey to Crazy Cat Lady. I bought cat furniture. I paid actual money to bring furniture solely meant for animals into my house. Yes, I bought Paco (pictured) and Madison matching cat beds. I call them the peanut butter cups and the cats seem to love them (which might have to do with the catnip I sprinkled in them because I was too impatient for them to investigate the beds on their own).

I was going to tell you some other things about my cats but then I realized I just wrote 534 words about cats and that might be enough for one post.

The new @amandashires & @JasonIsbell song is wonderful and heartbreaking. They’re playing it now on ISO-Lounging and I’ve got goosebumps.

Today’s #DailyWendell song is “Fire” by Waxahatchee because the feels like temp is 85° & I had to turn the AC on. pic.twitter.com/mwlR…