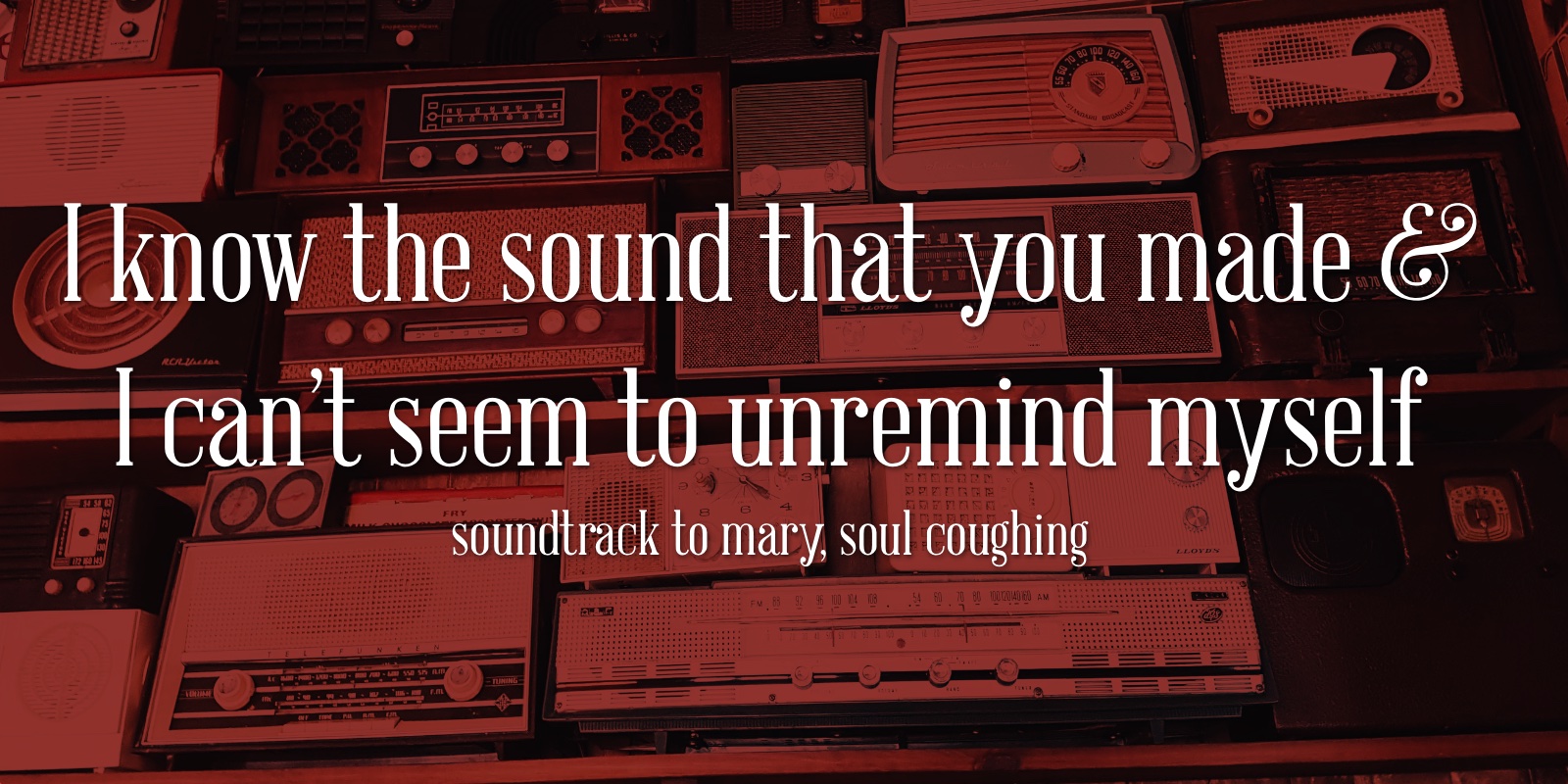 I’m going to attempt to do my very best to adequately communicate how very much a person I do not know means to me and has meant to me throughout my life. I’m also going to try not to cry while doing this because Sister #2 in here from Portland and using my dining room to conduct academic affairs or some such thing and I don’t want to alarm her.

Yesterday 89.3 The Current announced that after 17 years Mary Lucia is leaving the station. Her last on-air shift is tomorrow from 2-6. I put it in my calendar so I don’t forget to tune in.

It’s no exaggeration to say that of people I don’t know Mary Lucia & Jim Walsh have had the most influence over my musical taste. Of people I do know that designation goes to Sister #2 & Wolfdogg.

Mary was there in the mid-90s when I was just starting to develop musical taste. I spent probably hundreds of hours listening to her on REV-105 while I was working at the gas station. She was an excellent teacher not only introducing me to new music but also providing context to that music, making connections to bands and songs that I had no clue about. In a time before the internet put all the knowledge at your fingertips, this was huge.

I’ve written extensively about Mary Lucia throughout I Will Dare’s 22-year history (and 89.3 The Current too). Music means a lot to me, as do the people who bring it to me.

Because I’ve only lived here, I don’t know what radio DJs are like in other parts of the world. Maybe every city has a Mary Lucia, but I doubt it. She’s created so many radio memories, not just for me, but for a lot of listeners.

I still remember when she had people choking back sobs when she talked about the death of her dog. Or how gloriously defiant she was when she came back after a leave of absence due to a persistent stalker. Then there was the day she played nothing but The Rolling Stones. And I’ll never forget the chemistry she had with curmudgeonly newsman Bob Collins.

The memory that sticks out the most of course, was the day Prince died. While I might get the actual factual details wrong, in my memory Mary was in the studio and Andrea Swensson was at Paisley Park. Or maybe she had just returned to the studio from Paisley Park. The first thing Mary said was, “Oh, Kitten, how are you doing?” In a day filled with so many tears, they poured down extra hard as the too women talked about the events of the day. Listening to the two women console each other, the listeners, and mourn the loss of a man who loomed large not only on the Minnesota musical landscape, but the entire world’s, was the very definition of heart-warming.

I don’t know Mary Lucia as a person, but for the better part of 28 years she’s been my rock & roll fairy godmother. I’m so sad she’s leaving The Current and I won’t be able to tune into her when I need some sort of sonic comfort. I’m sad for all the listeners. I’m happy for her though. Seventeen years is a long damn time and according to a Facebook post she said she has two books in her, so I got that to look forward to.

Oh Mary, thank you so much for all you’ve given to me and the fistful of weirdos that is the Twin Cities music community. You’re gonna be missed.

No longer finding her left of the dial,
Jodi

P.S. I didn’t technically cry. My eyes did get super watery and I had to blink a lot. I’m saving my tears for tomorrow’s final show.