The Current is urging its listeners to help them compile a list of the of the 893 Essential Albums. They are asking people to submit their personal Top 10 lists and share them on social media using the #893albums hashtag.

It’s pretty fun to the see lists come rolling in. I like to see what music people consider vital to their lives. It’s also a frustrating reminder of just how sexist these lists are and how we still revere music made by men over music made by women. All the lists that I have seen have been dominated by men, and by that I mean all they include is albums made by men. From what I’ve seen women were more likely to have multiple women on their lists, men if they included any women (which is rare) would include one.

Which brings me to my premise: PJ Harvey is the Flannery O’Connor of Rock & Roll.

If you’re a literary-minded woman you know what Flannery O’Connor means in this context. Flannery O’Connor is the token woman dude list makers throw on their lists to prove they read books by women, to prove that they’re well-rounded and care about women’s stories and what they have to say. It is always Flannery. Always. Though, I could probably make a case for how Donna Tartt might be taking her place amongst GenX and Millenial dudes. But the point still stands.

So on these sausage-pa-looza album lists the one woman who seems to make the cut (again, that’s IF a woman even makes the cut, which isn’t often) it is PJ Harvey. She is the chosen one. The one that dudes will hold up and point to and say, “See, I appreciate music made by women. I love PJ Harvey!”

And women everywhere will roll their eyes and shake their heads and be all “yeah, okay, yes, you listen to music made by women, here’s your cookie.”

Of course, the sexism of these lists comes as no surprise to me. Many men in my social media feeds still use the term “Dad Rock” even though it’s a flaming pile of sexist bullshit. They use it without irony or any idea that it’s sexist. Many of the men only talk about and listen to (or talk about listening to) music made by men. There are a rare few who talk about music made by women with the same exuberance and excitement they use to talk about music by men, and those guys are my favorite.

I think many men made these lists in a haze of male privilege. If you were to ask them, these men, if they value women’s voices and women’s stories they would say “of course,” because they don’t think of themselves as sexist, even casually sexist.

But when it comes right down to it what they value the most are men’s stories sung by male voices. I bet it never even occurred to many of the listmakers to think about including albums made by women.

They will defend it by saying “I just put down the albums I loved the most,” which is all fine and good, but at least admit you love records made by men more. Some will say, “I just like the music. I didn’t think if it was made by men or women.” Of course not, because you are a dude and you live in a world that puts you at the center of it you don’t have to spend any time seeking out stories that reflect your experience. 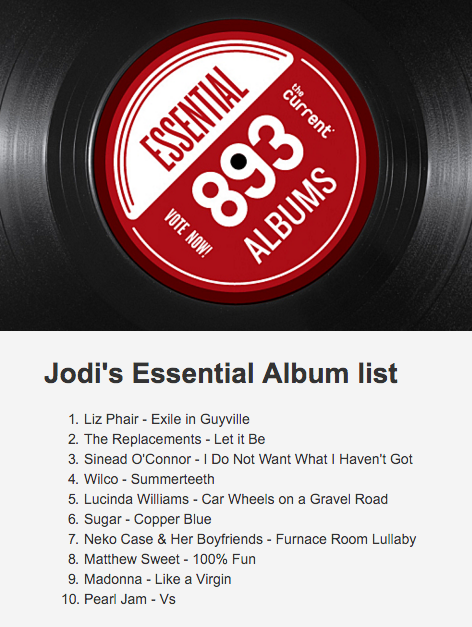 If you could only muster up one woman to put on your list IF you included a woman at all, it’s time to face the fact that you’re casually sexist and kind of blind to it. You cannot tell me you listen to music by women with the same passion and intensity that you listen to men and were unable to include more than PJ Harvey on your list. And if you’re going to make that claim, that you do love and appreciate music by women, then your list reflects the fact that you think men are better at rock & roll than women.

And we know that’s a load of horseshit, right?

I am not perfect. My own list is shamefully white, which says a lot about the kind of music I like (it too is shamefully white) and the fact that I refused to put greatest hits albums on the list (Sorry, Sam Cooke. Sorry, The Supremes). I did wrestle with putting “Thriller” in the place of “Like a Virgin,” but gave the nod to Madonna.

Yes, yes I know judging art is stupid and ranking it on lists is even dumber, but it’s often the way we talk about music and as is so often the case, women don’t even get to be talked about.