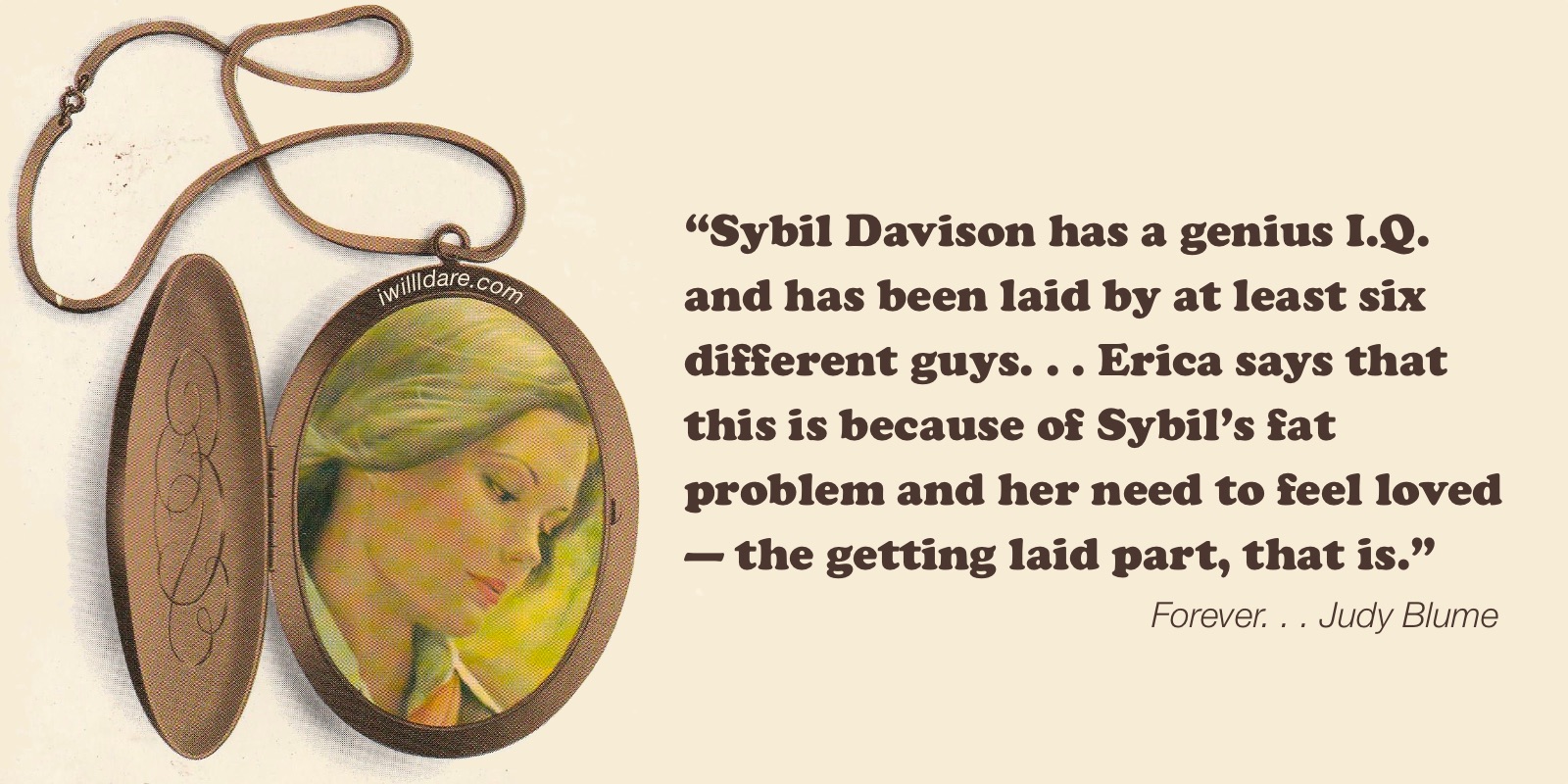 I first read Forever. . . by Judy Blume in 1983. I wish I could remember the provenance of the copy that was passed from girl to girl in the back of the school bus. In my memory it started with the Hanson twins who passed it on to Beth who passed it on to Jenni who finally gave it to me. I was last because I was only in fifth grade and they weren’t sure if I would understand such mature themes. I probably did not.

For those you not in the know, Forever. . . is a 1975 book about a high school senior who decides to go all the way with her boyfriend and nothing really catastrophic happens. She doesn’t die or get the clap or pregnant. Ms. Blume has said she wrote the book for her then teenage daughter who wanted to read a book where nice kids have nice sex and nobody dies.

This was the first dirty book I ever read in my life, though Flowers in the Attic was just around the corner. The first time I read it I remember being stunned to learn stuff came out of penises during the sexy times. In my memory this was brand-new, horrifying information for all the girls on the bus.

As I said, I don’t have too many memories of reading the book the first time around. In fact, the only thing I really remembered was Katherine talking about the first time she touched Michael’s penis and that her younger sister embroidered some mushrooms on her jeans. I’m kinda glad, because reading it this time around broke my goddamn heart.

While I applaud Blume on letting Katherine have orgasms (though I had to throw some side-eye that she comes solely from penetration by someone who is quite inexperienced — the first two times they try intercourse Michael comes before he gets it in and the second time right after he gets it in), boy does she do the fat girls dirty.

In Forever. . . fat is a thing to be feared more than teen pregnancy and STIs combined. Throughout Katherine’s mom is told she better start taking care of herself lest her thighs get flabby. When they celebrate the mom’s 40th birthday near the end of the book she asks if her thighs are getting flabby and Katherine is all “I got some exercises for you.”

While I’m not surprised Judy Blume treats fat people with such contempt in the book, I am surprised I forgot about it. Just the thought of the book Blubber, also by Blume, still makes me queasy and my eyes prick with tears. I only read that book once in like third or fourth grade and that was enough.

One of the worst parts of having an excellent memory is I remember all the books, TV shows, and movies where the fat girl is done dirty and only gets love/acceptance/kindness once she loses weight. And I remember how shitty these portrayals have made me feel throughout my life. Still.

I have great affection for a lot of the character Judy Blume has created, but my feelings about her books are complicated. I’m almost fifty and this book, Sybil, has made me feel like hideous, unlovable garbage.