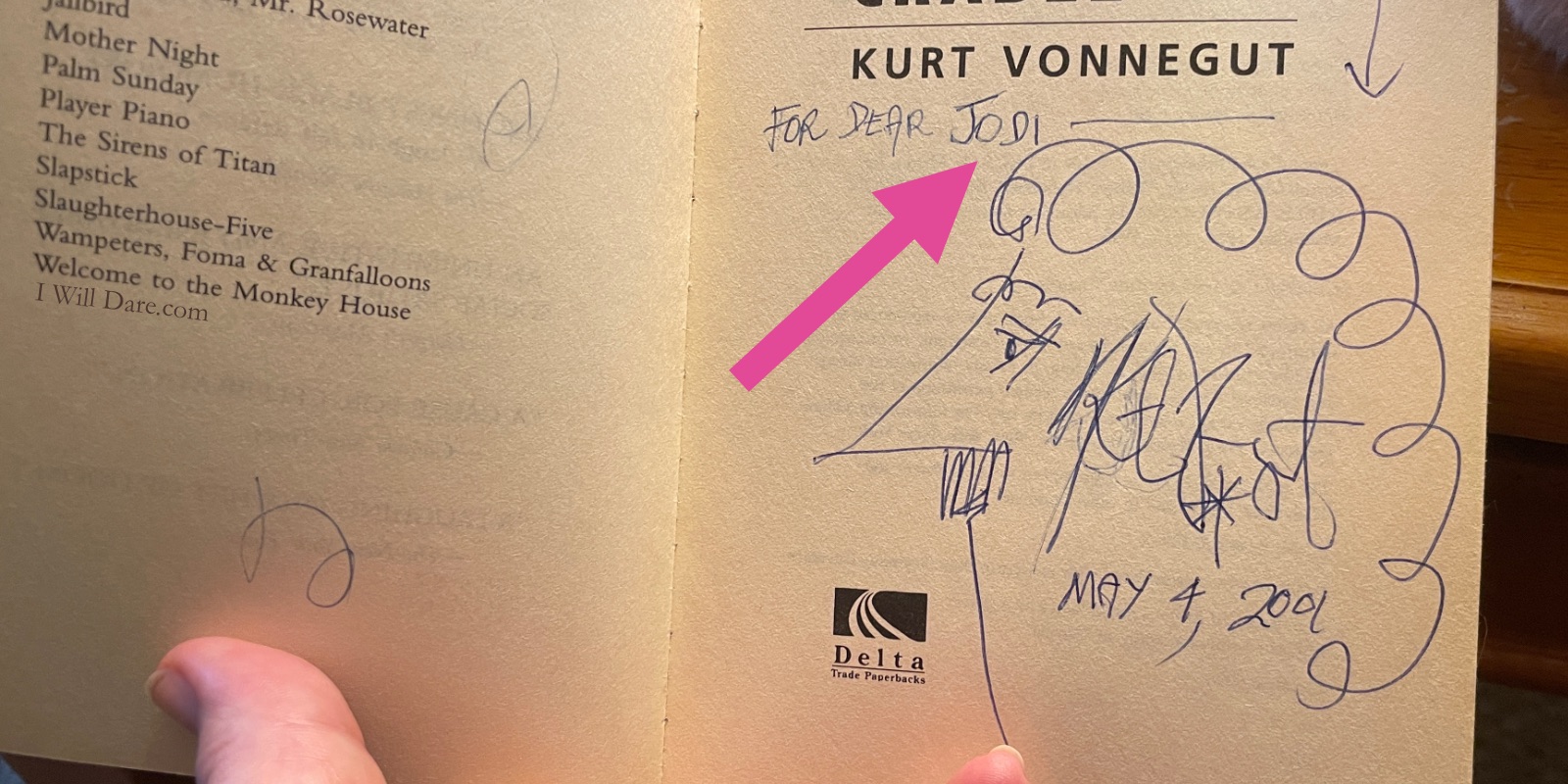 Today is the 99th anniversary of the birth of Kurt Vonnegut, a writer whose work has meant a lot to me throughout my life.

I did not come to Vonnegut easily. I made a couple of attempts at reading Slaughterhouse-Five when I was in high school and failed miserably. I decided Vonnegut wasn’t for me and went on my merry way.

If I hadn’t spent a few summers nannying for the Wilsons in the 90s, I’d probably have never come around to Vonnegut. Ross, the dad, was a huge Vonnegut fan. The Wilsons were a couple that read. A lot. Their house was filled with books and I think Ross had every Kurt Vonnegut book available at the time. When he suggested I read Vonnegut I was all, “eh, I don’t really get it.” And he was all, “Unpossible!” while putting a copy of God Bless You, Mr. Rosewater in my hands.

Because I had learned that recent-new-favorite John Irving, studied under Vonnegut at the Iowa Writer’s Workshop, I gave ol’ Kurt another shot. I then spent the rest of the summer cramming every Vonnegut book in the Wilson’s house right into my brain. I read them all, even Slaughterhouse-Five, in a three-month span and ever since they’ve become a kind of Vonnegut stew in my memory. I can’t keep all the plots or characters straight. They just live inside of me in a box called “Vonnegut stuff.”

At the tippy top of that box is the my most cherished possession, a signed copy of Cat’s Cradle (pictured above). I got this personally autographed copy as a gift for my 29th birthday from one of my alt.music.soulcoughing friends named Shawn. He was working at Smith college (I think) at the same time Vonnegut was a writer in residence.

Shawn bought a copy of the book and carried it around forever until he happened upon Vonnegut sitting on a bench (I think, this story is fuzzy it’s been twenty years now). When Shawn asked Vonnegut to sign it for me, Vonnegut called it the flagship of his fleet. Shawn got it signed, waited a month, and then sent it to me along with a letter explaining the story of how he got it.

Because I’m a shitty, self-involved, shallow numbskull, I opened the gift (it was sent to me at work) wondered why he sent me a book he knew I already read and owned, and then tossed it aside to open other presents. I got a lot of presents for my birthday back then. Not only because my birthday was heavily marketed by me and I made it clear I wanted presents, but also because back in 2001 people who read your blog would send you stuff in the mail. It was excellent.

So it wasn’t until I was done lunching with friends and ogling the flowers I’d conned the Tech Support guys into getting for me (something I did for like three birthdays in a row, which still makes BFK bitter) that I finally sat down and read Shawn’s letter. I can still remember my hands beginning to shake and my eyes start to water as I read the letter. I remember I gasped so loud once I opened the book that half the marketing department ran to my desk to see what was up.

All this makes me love Vonnegut extra hard. Not only is there the genius of his words, the humor and humanity I aspire to with my words, but also the idea that someone once cared about me enough to do this really thoughtful thing for me. We weren’t even sleeping together! In fact, Shawn and I never even met in real life. He simply knew that Vonnegut meant a lot to me and seized the opportunity.

Isn’t that amazing? I like to believe Vonnegut was impressed with the kindness of it all.

I sure as hell am. Still.
Jodi