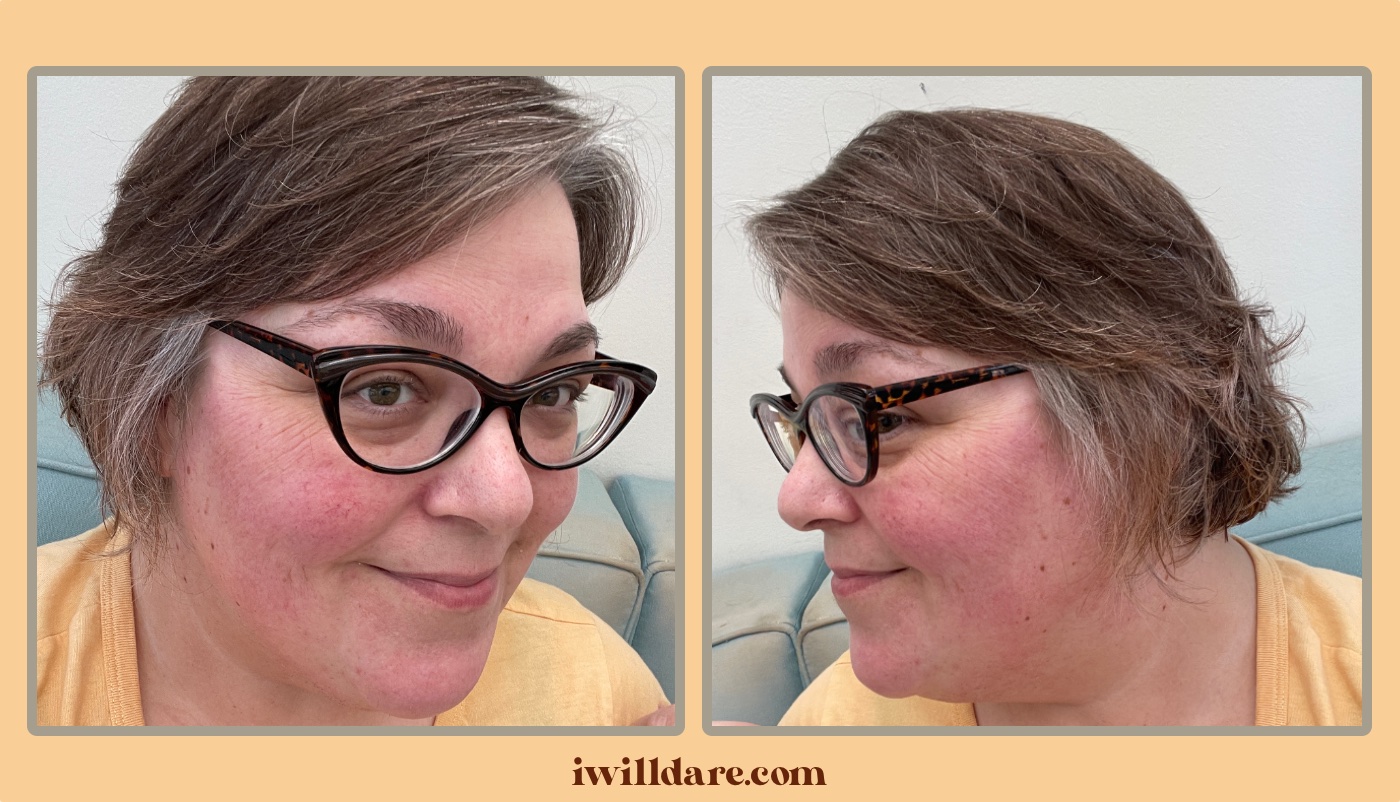 Hold on to your butts, Darling Ones,

This is not the point of today’s letter, it was just some good news I wanted to share with you. Todays letter is about my hair. I’m sure you’re curious because it has been literally 30 days since the last hair update.

What possible dramatic hair changes could have happened in 30 days, you ask? A lot. Mostly that I went from looking like Jackson Browne to a skeevy, mulleted guy who wore an Aerosmith t-shirt while smoking Marlboro Reds behind the high school in 1988. Ick. It was bad and the feathery mullet was driving me bonkers.

This is why last night at 3 a.m. while insomnia ravaged my brain, I cut the mullet off. I did it myself. And, I gotta say, it doesn’t look too bad. I mean, take a look above to see for yourself.

I was a little salty about not only being unable to sleep, but also all the laundry was done — washed, folded, put away. This is my go-to activity when insomnia is in town. Also it was warm in my boudoir because it’s always ten-fifteen degrees warmer upstairs and I’ve turned off the AC (hopefully for the year). Thus my mullet was a little sweaty and a lot annoying. So I marched into the bathroom, grabbed some scissors from the drawer and in four snips I had myself a new ‘do.

In my head, I was making comparisons to the “Needle in the Hay” scene from “The Royal Tennenbaums.” Only, I rewatched that scene before writing this and uffda! I forgot what a gut punch it is. I expected it to be a little painful because I won’t ever be able to listen to Elliott Smith without some pain, but that scene? Fuck. I’m not the biggest Wes Anderson fan, but that scene is stunning and dark. I also thought of the scene from “Empire Records” where Debra shaves her head. But that one is a post-suicide attempt scene.

FOR THE RECORD: I am not suicidal. I’m not even depressed. I do not suffer from depression. I’m maybe a little bit anxious for dad-related reasons and there’s always my deep, inherent sadness, but, I repeat, I am not suicidal. I’ve had problems in the past with people interpreting things I write here as me wanting to kill myself. I do not want to do that.

Wow, for a post about cutting my hair like some kind of hillbilly, white trash, super religious ding dong this got dark fast. I blame Hollywood because it seems as though they use self hair cutting as a metaphor for a mental breakdown.

My self-done hair cut was a metaphor for being tired, cranky, impulsive/impatient, and a little sweaty. Maybe that’s a kind of breakdown. Doesn’t matter, because I feel like a sexy, punk rock renegade with my yellow Willie Nelson t-shirt that matches my yellow cans (not pictured). Also, I got my favorite cookies from the grocery store today. Not too shabby, all things considered.*

And, lest we forget, there’s a John Cougar Mellencamp book coming out next week.

*Today I spent 20 minutes of a 30 minute meeting commiserating with a client about how everything is a lot all the damn time. She asked me if I was exhausted and if trying to get work done was harder than ever? And I was all, “hell yes, it is.” Then we soaked in our bitterness about how our Spring post-vaxx optimism had been crushed and that the disillusionment that has caused is a lot to bear.