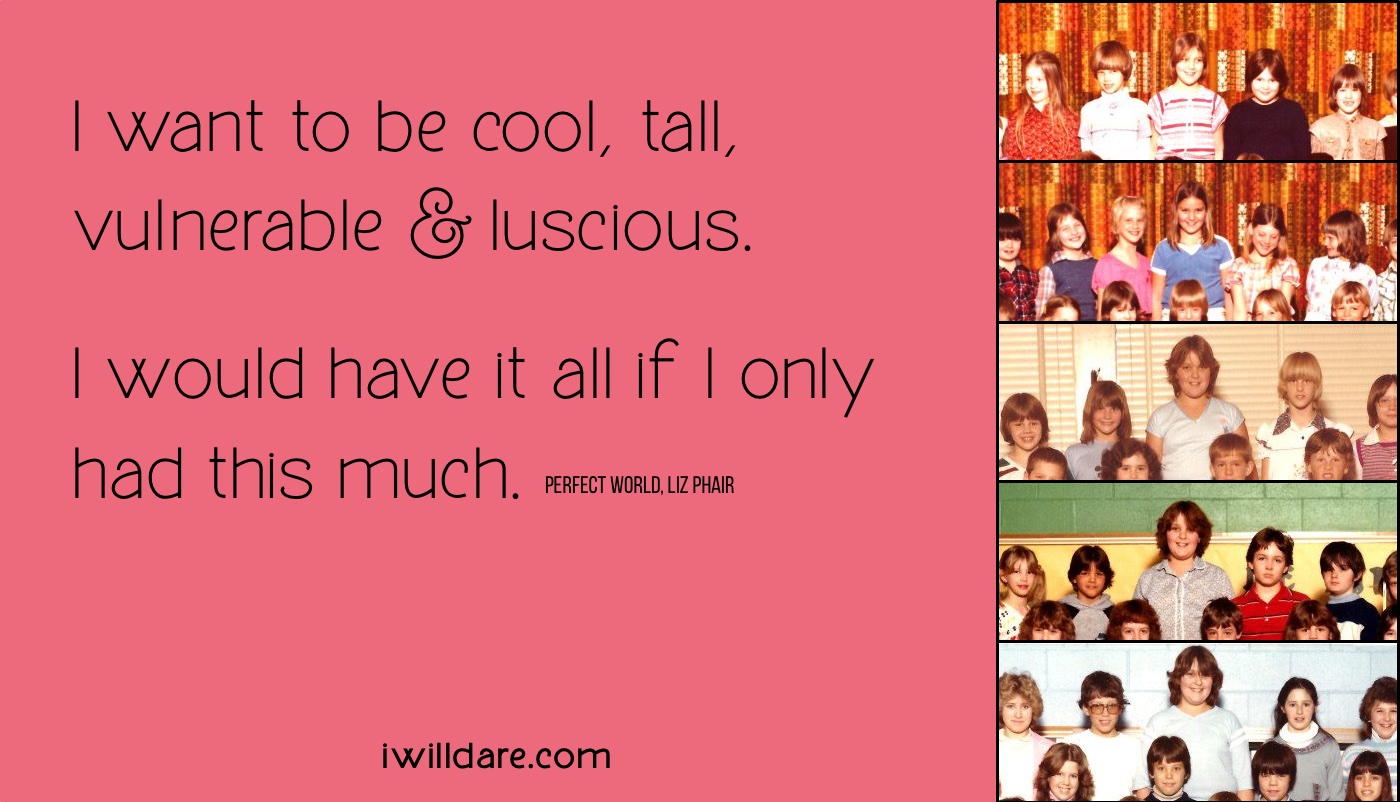 Whenever I’m gonna write about being tall I love to pull out my elementary school class pictures from the 70s & 80s. They wonderfully illustrate how I’ve been an odd, physical other from the get go. I start out in first grade just being regular tall and then as the years progress I keep going & going. Fourth grade (the second from the bottom) looks the worst but only because in fifth grade (the bottom) I was in a fifth/sixth combination class and so all the kids on the top riser with me are a year older than I am.

Fun fact: The kid who told me The Rolling Stones were dirty in fourth grade is in four of the five pictures, though you can only see him in two of them.

My unusual height is on my mind today, specifically, because I abandoned the Susan Sontag biography I was reading. I quit for three reasons:

Number three had zero things to do with why I quit the book. I am used to people, and women specifically, thinking 5’8″ women are giant freaks of nature and while it annoys me to my very core I live with it. When she was here last week, 5’8″ Sister #2 said she laughs when people call her tall.

At one point in the biography Sontag says you cannot have a proper boyfriend unless he was taller than you. This made me bark with laughter. According to Susan Sontag’s teenage logic I’ve never had a proper boyfriend. In fact, I think the only man I ever dated who was taller than me was the Tall Tall Handsome Man (TTHM)* and he doesn’t count because he wasn’t sexually attracted to me.

My brain is a cloudy stew of height and dating. Sometime this week will mark the one-year anniversary of ending my last romantic relationship. I have a lot of shame around this relationship because I accepted a lot of shitty behavior from them.**

There’s a great line in BoJack Horseman about how when you wear rose-colored glasses all the red flags are just flags. I can’t even use the rose-colored glasses excuse. I chose to ignore all the flags because I really, really wanted to be in love. It was, of course, a lie, which is a little ironic because I broke up with them for being a lying liar with pants of fire. Also, I discovered for the first time in my life that being lonely in a relationship is roughly 930% worse than being lonely when you’re alone.

I should have known the first time we actually met. They told me they were also 6’5″ and I was pumped. When I got out of Ruby in the parking lot of a suburban St.Paul Coffee shop, I knew they’d lied to me. They were easily two inches shorter than I am.

Yikes! This one really got away from me. I’m already 800+ words in and I didn’t even get to the part about Nerve personal ads from the early aughts or the Liz Phair lyric or living in a body frequently fetishized by heterosexual men.

Here’s what I’ll say to wrap this up: I’m very glad I ended that relationship. Zero regrets. When I think about it I’m not so sad anymore, mostly I just shake my head at myself for being a giant dum-dum. Also in the most frigid depths of my ice robot heart I hope they still can’t listen to Jason Isbell without thinking of me. If there is any romantic justice in this world this will be true.

Sorry for blathering on,
Jodi

P.S. An update on the dad front: my mom got him to go to the emergency room last night. He was moved to the best hospital in the Twin Cities this morning. We have no idea what the prognosis is, but at least he’s not sitting at home waiting to die.

*Recently, a friend said he believes the TTHM is my soulmate. I disagreed. Loudly. Then I tried to murder him with my laser eyes. Then I realized, of course he thinks that. The TTHM was the last romantic relationship I wrote about here because of the creepy, mean, stalker lady. So he takes on a larger role in my romantic history than he really has.

**I feel shady & shitty using they/them pronouns. My ex is a trans-woman. For most of our relationship she presented as male. She came out to me eight months before the end of our relationship. Using he/him is wrong. Using she/her feels like I’m misrepresenting my sexuality and appropriating a queerness that doesn’t belong to me. Gender is hard. Sexuality is hard. I have a lot more to say about this at some point, but I’m still not ready.