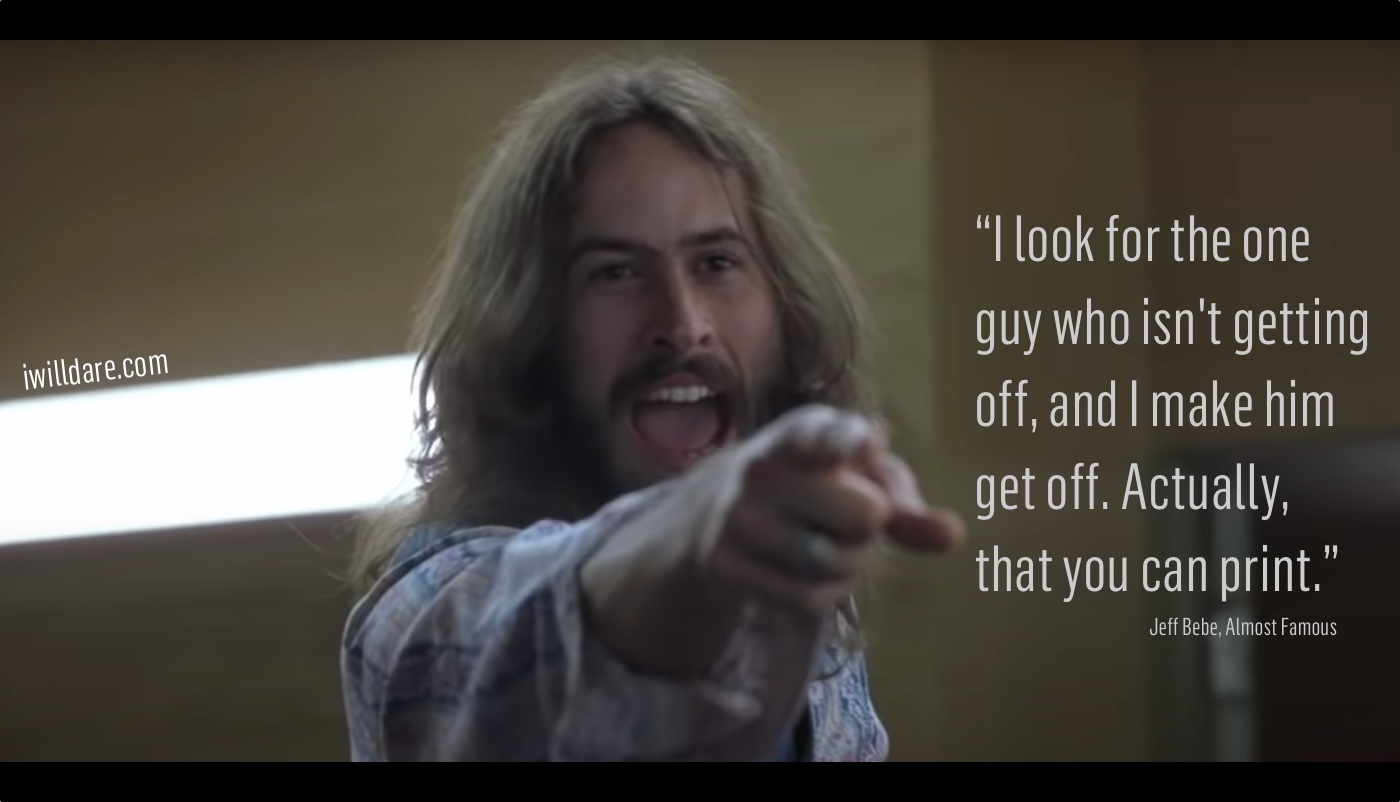 Not long ago I confessed to how many of The Replacements’ lyrics I use in my every day life. It’s an embarrassing amount.

Lest you think I am a one-trick 6’5″ Spinster Goddess, I decided to share with you the everyday “Almost Famous” quotes that have become part of my personal vernacular. In case you live under a rock, “Almost Famous” is a 2000 Cameron Crowe movie about a teenage reporter going on assignment for Rolling Stone with the almost famous band Stillwater. It is one of the best movies of all time according to me, and I can recite the entire movie by heart because I watched this, “High Fidelity,” or “Shakespeare in Love” almost every night from 2001-2008 when I lived in Prior Lake and didn’t have cable or over-the-air TV and only had my DVD player for televisionary entertainment.

I used this one on my nephew this week when he had to postpone our lunch plans. He responded, “I’m always at home, but I think we’re both pretty cool.” He also included a smiley emoji with hearts swirling around it. I explained it was a quote from a movie. He did not care even a little bit.

Jim Morrison? He’s a drunken buffoon posing as a poet.

“Give me the Guess Who. They got the courage to be drunken buffoons, which makes them poetic.” I fucking hate The Doors and will give this little spiel whenever they come up anywhere. I’m fun at parties!

I am a golden god.

I say this one any day I get a sub-one-minute time on the NY Times Mini Crossword. It happens a lot. Last week I had six sub-minute times. Usually, I toss up some rock & roll fingers and shout “I am a golden god!” Then I point at Wendell, my cat, and say, “And you can tell Rolling Stone magazine.” I don’t finish the quote because I’m not on drugs.”

I say this when anything happens at all ever in my vicinity. It probably does not surprise you that I don’t use this one very much. I’m the mayor of nothing happens.

Be honest, and unmerciful.

This one is a reminder for me when I’m writing. It doesn’t always work, but I at least think about being honest and unmerciful.

You are rebellious and ungrateful of my love.

I said that one thirty-six seconds ago to Wendell, who has climbed on top of the plant-laden bookcase that really does not have room for his furry ass.

I look for the guy who isn’t getting off, and I make him get off. Actually, that you can print.

I probably say this one more often than all the rest because I say it in my head every time I finish a post here on I Will Dare dot com.

Making you get off,
Jodi