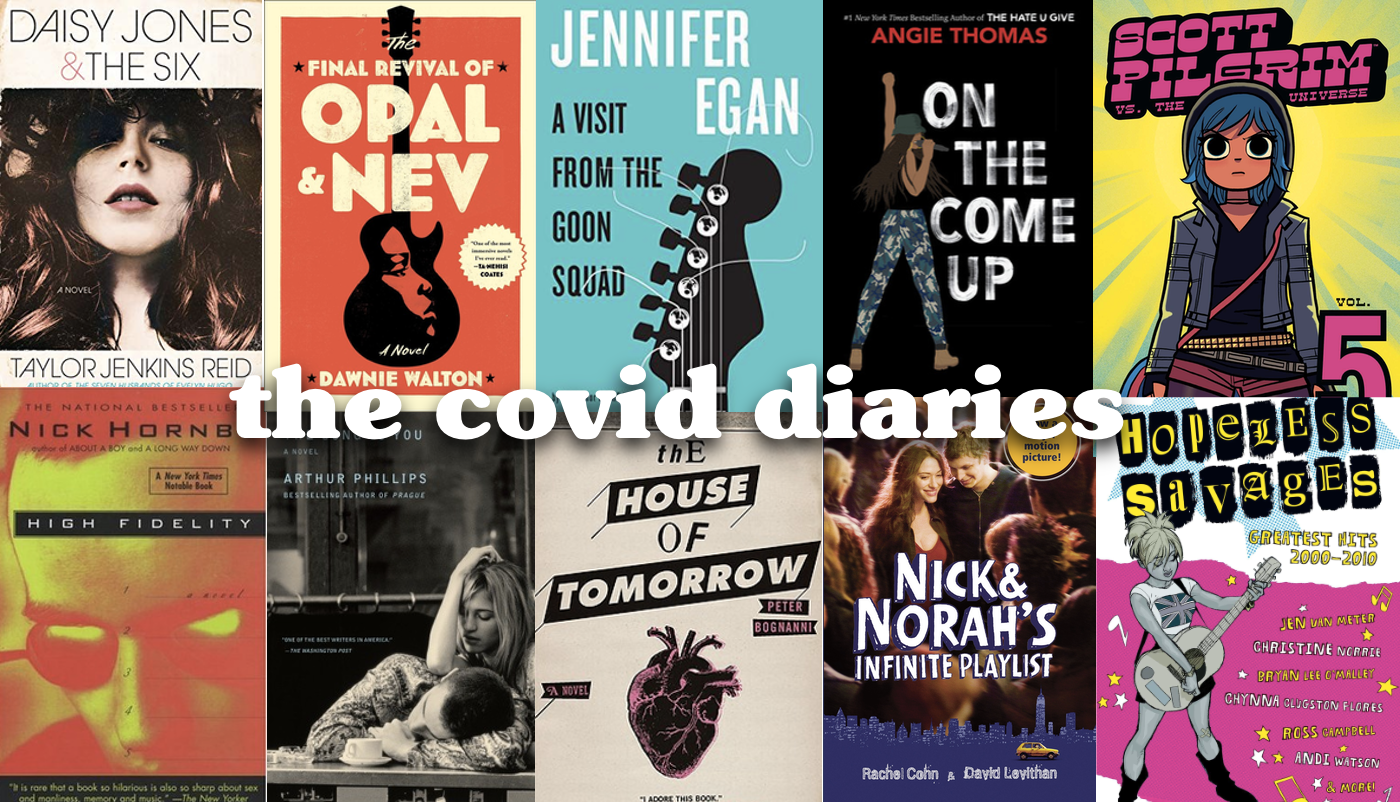 I started this list with intentions of posting it the day after The Top 10 Nonfiction Music Books, but I am fickle and easily distracted.

This morning TimeHop reminded me that twelve years ago I talked to Arthur Phillips about The ‘Mats after his phenomenal reading at the library. You’ll see why this jogged my memory if you read the list below.

I love this book. I think I’ve read and/or listened to it three or four times? The audiobook is read by an all-star cast including Judy Greer and is fantastic. It’s a story of a band that falls apart at the pinnacle of their fame with so many shades of Fleetwood Mac the book could have been called Rumors. It’s so good. The writing is phenomenal and Daisy Jones has so much to say about sexism and music. I can quote her from memory, “I have absolutely no interest in being somebody else’s muse. I am not a muse. I am the somebody. End of fucking story.”

2. The Final Revival of Opal & Nev by Dawnie Walton

I also love this book a whole bunch. The only reason this gets the #2 spot is that ‘Daisy Jones’ has more music, which is the true joy of my heart. This one is more political, with the main character, Opal, facing a lot of sexism and racism. The story is fantastic and told wonderfully through interviews, newspaper stories, journals, and social media. It’s a story told in the way we learn things today and is utterly unforgettable.

3. A Visit from the Goon Squad by Jennifer Egan

This a collection of loosely connected stories and not all of them deal with music or the music industry, but Egan is a genius and her books are (for the most part) amazing. You should read this one even if you don’t like music.

4. On the Come Up by Angie Thomas

I’ve read all of Angie Thomas’ novels and they are very, very good, but this one about a young female rapper is my favorite. Rap and Hip-Hop aren’t really my jam (I appreciate it, but it’s not music that clicks into my soul like a LEGO), but the way Bri, the main character, talks about the music that stirs her and how she writes it is captivating, and how she manages to be creative in the dire circumstances she’s living through makes for good reading.

Is this cheating, putting a six-book graphic novel series on the list? Yes, I do not care. There’s so much music in the series, the books are drenched in it. Plus, Ramona Flowers’ favorite band is The Replacements. COME ON!

6. The Song is You by Arthur Phillips

This is charming book about a dude stuck in life who has a chance sort of meet-up with a rock singer and they have an increasingly interesting will they/won’t they courtship that takes place through songs and phone calls and emails. Like so many of us Julian uses music to make sense of his life, and when he reaches a low-point, when he feels sexually, emotionally, and creatively dead, it is music that resuscitates him.

7. The House of Tomorrow by Peter Bognanni

Sebastian is a weirdo home-schooled kid who lives with his grandma in a geodesic dome in a small Iowa town. Her health is precarious and they have a falling out that leads him to stay with a kid he met at the hospital. Jared, is a chain-smoking heart transplant kid whose family is on the verge of falling apart. Together they start a band, of course, and Jared schools him on all the ways of the word from Pop Tarts to The Ramones. This one is drive by Sebastian’s unique and wonderful voice.

Music infiltrates this book, providing a backbeat for all of Nick and Norah’s adventure and the one thing that initially draws them together. Wilco, The Cure, Michael Jackson, the Beatles, Patti Smith, Belle & Sebastian, Green Day, the Clash, Parliament . . . those are just a few of the bands mentioned in the book (the few I can rattle off the top of my head). Anyone who has ever had that spark of attraction and excitement that comes with being musically connected with someone will love this book.

This is another graphic novel series about what happens when punk rock stars fall in love, grow up, and raise a family. It’s hilarious and you should read it (I’m getting kinda hangry here so I’m being short).

I almost didn’t include this on the list. I almost went with Juliet, Naked just to be subversive. I recently tried to re-read High Fidelity after re-watching the amazing and criminally-underrated Hulu series based on the book. The re-read didn’t go well. I stopped after I made the cringey, grimace, “oh no, this has not aged well” face twice within a few pages (gross racist steroetypes, use of the r-word). I just didn’t have the energy for the constant mental gymnastics it takes to deal with how insensitive we were to non-white, non-cis, non-hetero people in the 90s.

I think the affection for this book stems more from the phenomenal John Cusack movie than from the actual book. I love the movie. I’ve only ever been so-so on the book. However, I cannot deny its place as the touchstone for rock & roll novels (even though I kind of want to and maybe would if I wasn’t really, really hungry right now).

P.S. I’ve been listening to The Marfa Tapes record by Jack Ingram, Miranda Lambert, and Jon Randall, all damn day. It’s so good.