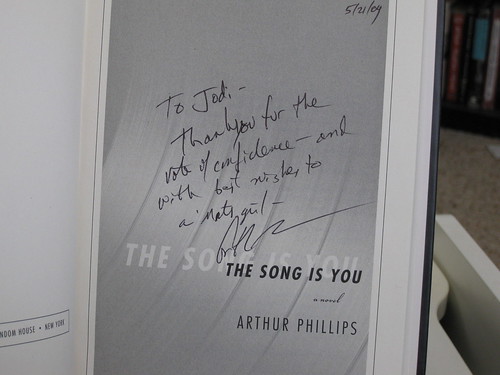 It isn’t often when my love of Rock & Roll collides so beautifully with my love literature. Last night it did at Arthur Phillips’ reading for the delightful, delectable, delovely The Song is You

Phillips, who grew up in Minnesota, read in the huge Carl Pohlad hall at the Central Library in Minneapolis. The place was packed, every single seat in the auditorium filled. There were people sitting on the steps and standing in the aisles. Seeing that kind of turnout gave me goosebumps. The audience skewed really old, toward the grey-hairs (60+), which was weird considering the books is about iPods, Rock & Roll, and long-distance romance. Not really the fodder you’d expect to get older people hopped up. But they sure as hell turned out for the event. Good for them.

Because music plays such a large role in the book Phillips asked Chan Poling (The Suburbs, The New Standards), one of his musical idols, to join him on stage. Steve Seel, a DJ at The Current, mediated the whole event and it was pretty amazing.

Phillips read just a little bit about Billie Holiday while Chan Poling played but mostly the three men talked about music and art and the role it plays in our lives.

They talked a lot about longing, which is a major theme in Phillips’ novel (and might be part of the reason I loved it so much) and how, as Seel said, longing is the thing that drives so much art.

“Of course,” Poling said. “Resolved longing ends in diapers and babies.”
“Yeah,” Steel said. “The end of rock and roll.”

It was tough because even though I was in a room with a couple hundred people, I wanted to get right on stage with the three men and join the conversation. They covered all the topics that I spend so much of my time thinking about.

Afterwards, Jags and I stood in line to get our books signed. While waiting I got shake Chan Poling’s hand, because he and Jags are pals and she introduced him to me. It was all kinds of weird. He was so much a part of the scene, the godfather of the scene, that has played such a significant role in my life that I was a little speechless.

Then I got to meet Phillips who has the most amazing blue eyes ever. Shocking blue. I should have complimented him on his eyes, but instead I told him I thought he did a good job on the ending of his book. MPR had been busting his chops a little earlier in the day, and I said, “good job.” Because people don’t dole out enough good jobs anymore.

He looked a bit taken aback.

“Thank you, he said, and then stopped. “Really, thank you. It’s nice to hear that.”

Then I told him how his Suburbs were my Replacements. And we talked a bit about music — the ‘Mats, Husker Du, the Suburbs. I got to espouse my theory how you were either a Husker/Mould person or a ‘Mats/Westerberg person. He agreed, though said he was one of the odd balls who preached the Suburbs. Which means I AM TOTALLY RIGHT.

Then he asked me if I noticed that he name-dropped Paul Westerberg in the book.

“Of course,” I said. “But I totally didn’t let that influence how I felt about the book.”

Then he laughed, and I left on a high note before I could do anything stupid.

(this is a Suburbs’ video from 1981, but Poling played this song last night for the crowd)