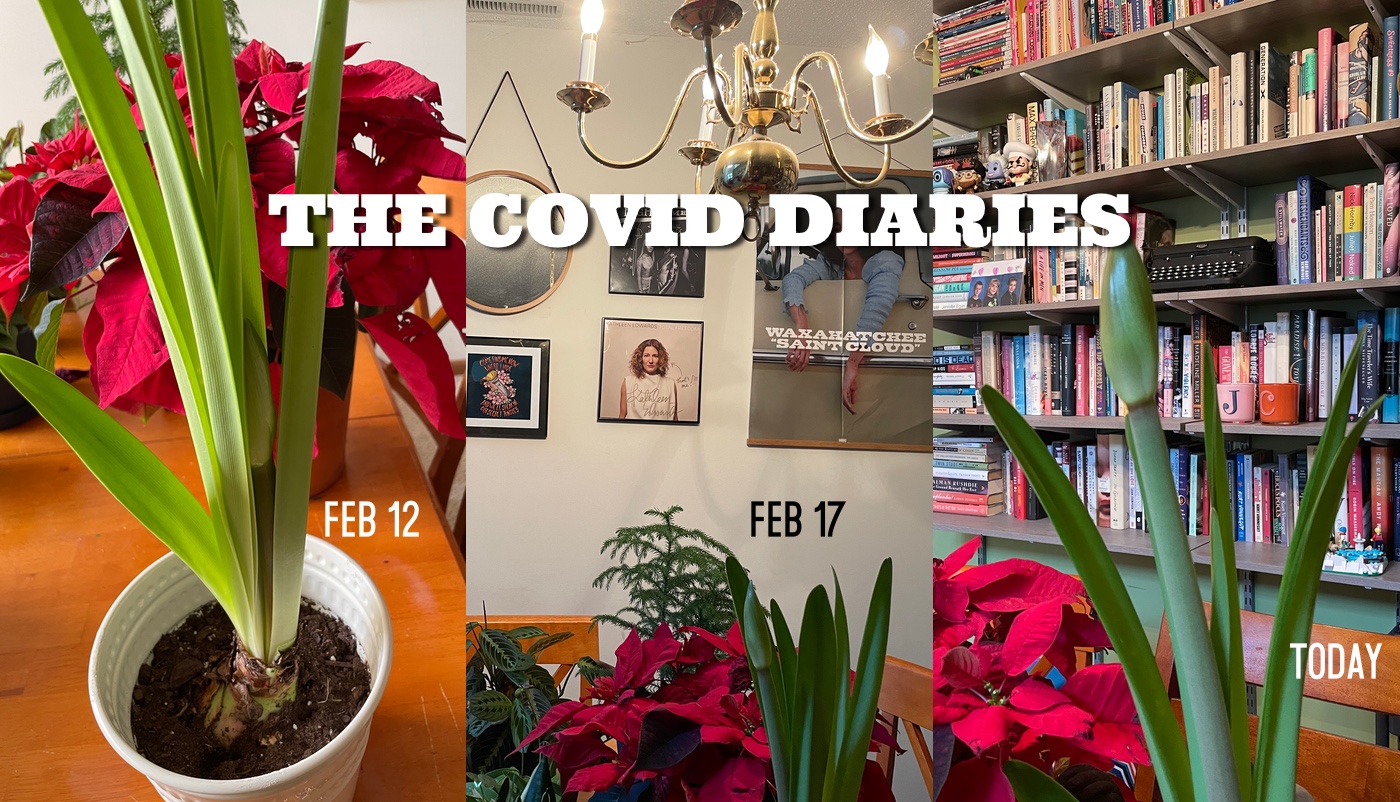 For someone who doesn’t speak to very many people very often I spend a lot of time convinced I’m repeating myself over and over. I don’t know if the pandemic has brought this out more than usual or if it’s the danger of having a 20-year-old blog I’m simultaneously convinced nobody and everybody reads and commits each of the 8500* posts to memory.

This struck me when I was on the phone with EM this morning.

“You still there?” She asked at one point in our conversation. “Hello?”
“Oh,” I said, snapping back to attention. “I was just admiring my amaryllis and got lost.”
“Huh?” She asked.
“You know the one I thought was a bucket of dirt.”
“Umm, no?”

I was surprised I hadn’t told her the whole story, because I tell her almost everything. Eve. Ry. Thing. Like the boring stuff and the traumatic stuff and the embarrassing and shameful stuff. She gets all the stuffs. She also gets all my rants and some of my very best jokes. I made a David Bowie/Dancing in the Streets joke a few weeks ago that still brings me tears because I am hilarious.

It’s strange that this came up today. I’ve been thinking about the repetitive nature of my writing a lot this week because the grocery store gave me store brand toaster pastries, which is a tragedy. I’m a full-ass grown up and it’s Pop Tarts or nothing. Store brand toaster pastries are disgusting. For a very long time I only ate frosted chocolate fudge Pop Tarts. They’re my go-to and the OG of my breakfast world. As I’ve matured I’ve branched out into Cookies & Creme Pop Tarts and the have no right to be so damn good Froot Loops Pop Tarts. I’m sad to report that any of the pretzel or peanut butter Pop Tarts are an abomination.

When I was young and we were really poor Pop Tarts were an occasional luxury. We loved them so much we’d fight over who got Sister #3’s Pop Tart crusts because she didn’t eat them. Also, we were so very hungry all the time. If I keep typing about this too much I’m going to cry. Pop Tarts are one of those foods I keep in my house at all times because I love them and I can afford it. Same goes for any kind of juice and cheese that isn’t Velveeta.

With Pop Tarts on the brain I keep thinking about when I was an adorable, fearless, and naive 26-year-old hussy** who met a man from the Internet who was nearly old enough to be my father and as tall as me. He brought me a box of frosted chocolate fudge Pop Tarts because obviously I have discussed my love of Pop Tarts far and wide since the inception of me talking about stuff on the Internet. I vaguely mentioned this all the way back in 2006 before capital letters were invented. And I wasn’t gonna write about it because everybody/nobody would remember that one post and be all, “she’s run out of material. she’s repeating herself again.” Wanna know what’s really sad? I’ve been worrying about repeating myself since this blog was only nine.

Anyway, Phyllis*** the Amaryllis is about to burst into bloom and I cannot wait because it’s really weird to have this giant penis-looking thing in the middle of my Sadness Garden on the dining room table.

Hooboy, I didn’t even think I’d have anything to say today and here we are 800 words later.

*There were way more but I deleted a bunch of them where I didn’t know what the fuck I meant and also the ones about turkey sandwiches. Technically this one right here is 8501. Whenever I login to to WordPress (the software that runs this joint), it tells me how many posts and comments there are. It amuses me.

**I can use this term to describe myself as a joke because it makes me laugh but if you ever use this kind of misogynistic bullshit slut-shaming language to describe me I will say many mean things about you to your face and hurt your feelings.

***Have you watched The Office so many times that when you see my phallic Phyllis the Amaryllis you think of that episode where Phyllis gets flashed and Dwight calls her Phallus? I do.