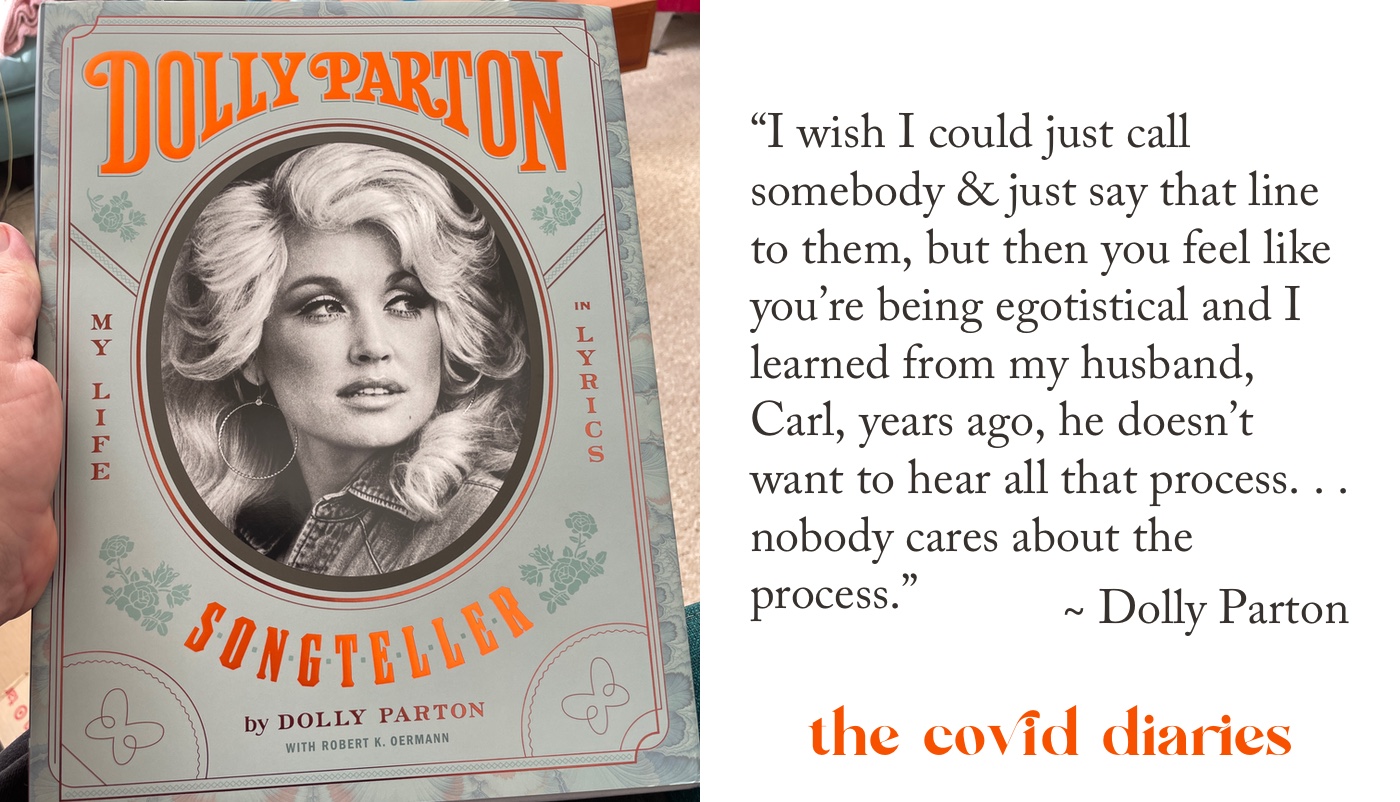 In an odd bit of serendipity, the audio version of Dolly Parton, Songteller: My Life in Lyrics I had on hold at the library came in a few hours before the physical copy landed on my doorstep. The actual physical object is heavy and beautiful and I’m so glad I own it.

Because my life is nothing but waiting for opportunities to share Dolly Parton fun facts* with people, I dove into that audiobook this morning as soon as I finished my Spanish lessons (818 days in a row, bitches). I did not get very far, because she kicks off the audiobook talking about her songwriting process and so I had to stop and contemplate.

If you read the quote above you’ll see that her husband doesn’t care about her process and my first thought was, Excuse me? Isn’t that the entire point of a husband? Someone to listen to your brilliant creativity, bring you chocolate chip cookies, and throw you a bone on the reg? Please, do not tell me if that isn’t the entire point of a husband. I do not want to know. I’m lonely enough as it is.

What really caught my ear in the quote was nobody cares about the process. Damn, Dolly. I know she is speaking the truth. I don’t care about anyone’s process. I’ve read about 108 memoirs by artists (mostly musicians, mostly women) and not once did any of them have a process that was interesting. None of them. Most of the process is: I worked really hard on a nearly daily basis. I thought about some things. ***MAGIC HAPPENS.*** I made the thing.

However, knowing nobody cares about the process and wanting someone to care about it are two different things.

This is why I’m telling you that today I read my book, The Beast. Not all of my book, but about half of it. Earlier this month when I started re-writing The Beast for the seventh time, I dove right in. I figured I had thought enough about it and it was time to do the doing, the butt in chair part. That part hasn’t been going so well this week, so I decided to just read the fucking thing to see if it was even worth salvaging.

Darling Ones, I really liked it. I read about five chapters today and while there are a lot of things to fix (namely my shitty imaginary song lyrics), but the bones are there. The sexy parts were sexy! The fun parts were fun. The sad parts were sad. I’m taking Cheryl Strayed’s writing advice and being brave enough to break my own heart. At least I think I am. I stopped reading before the real heartbreaking was gonna begin, but I think it’s gonna happen.

I was kind of surprised that I liked it. Reading it did not make me want to die, except for the fact that I used the phrase “and the color drained from her face” about 82,105 because I am bad at conveying emotion. I’ll fix that at some point.

Not too shabbily yours,
Jodi

*This is only partially true. While I love to share Dolly fun facts to the point where I annoy/scare away potential suitors, the truth is I love all fun facts and often disguise my opinions as fun facts to foist upon unwitting people.

P.S. Last night I had a dream that I wrote a hit song for Juliette Barnes (shut up, yes, I’m still not done watching “Nashville”) called either “Yank it, Baby” or “Yank Me, Baby” and in the dream I was so excited about the title of this song that I kept telling myself to wake up and write it down so I wouldn’t forget it.