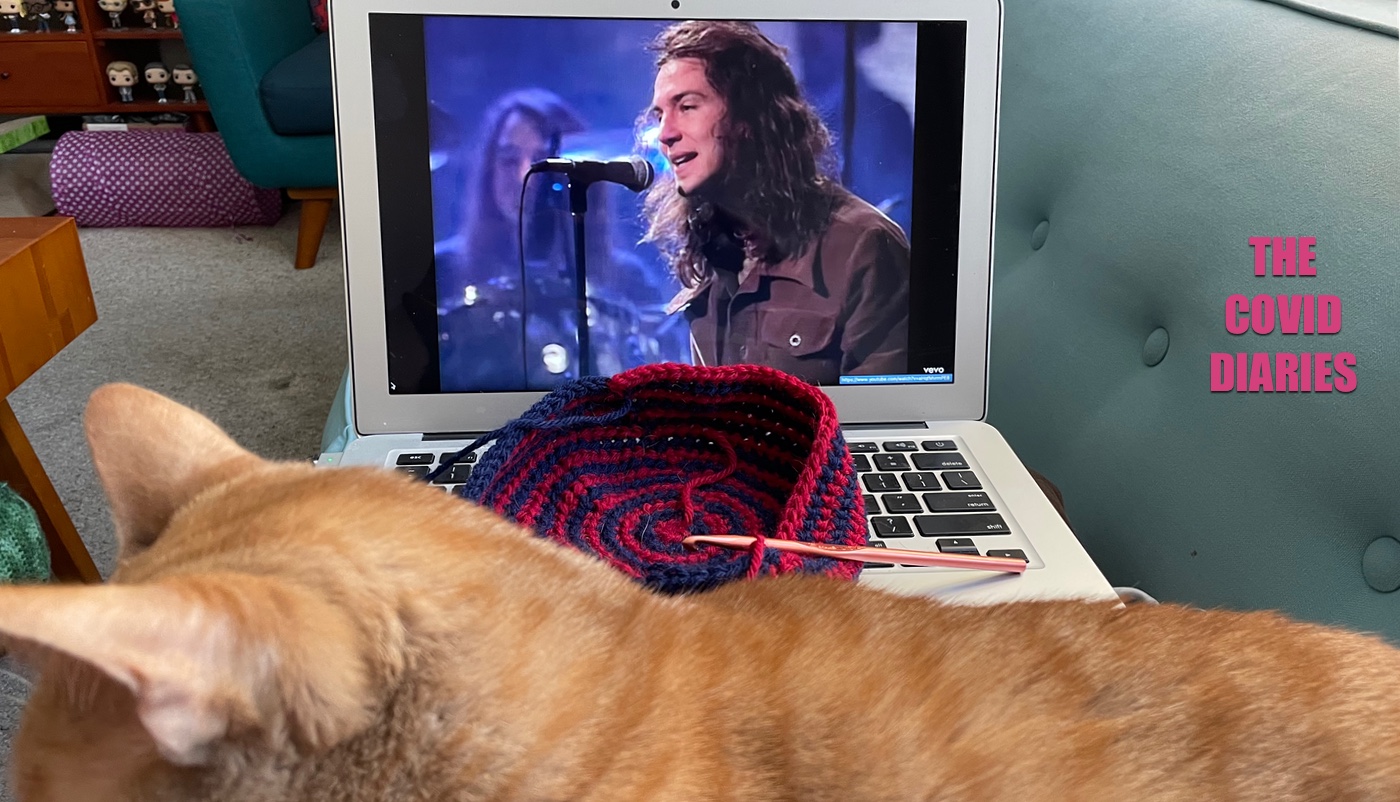 Question for you Darling Ones,

Is the “I was into them before they were cool” or “I saw them at this bar with six other people, nobody showed” an asshole trait specific to GenX or are other generations afflicted with this disease? I ask because I saw some people of my generation complaining about the youth discovering Fleetwood Mac (like is that a bad thing?) and I was wondering do Millenials do this? GenZers? Or do they use a different form of gatekeeping?

Do you know? Please tell me.

I bring this up because I seem to have unlocked a very specific GenX Spinster achievement: watching Pearl Jam Unplugged while crocheting with a cat on my lap at 4 p.m. on a Thursday.

Yes, it’s okay if you’re a little jealous of my rock & roll lifestyle. It’s to be expected.

I will not bore you with all the reasons Pearl Jam means so much to me and while they’re not “my band,” their music is very much a part of my coming of age. There are 20 years* worth of posts about me yammering on about Pearl Jam. Have at it, Sport.

However, I will bore you with one reason. I know I’ve talked about this before and I don’t care, I’m gonna talk about it again. This has little to do with spinsterhood and a lot to do with the gatekeeping of music.

As you may know I was the editor of the Arts & Entertainment section of my college newspaper. Incidentally, I’m Twitter pals with the two people who were the editor before I was (Hi Amy & Marc!).

Because I was the arts editor I worked with a lot of Music DudesTM. It was mostly fun. However, I had to deal with a metric fuckton of mansplaining. And I can’t say this with 100% certainty but I’m pretty sure Music DudeTM mansplaining is the worst of all the mansplaining. I mean, except for that one Marketing DudeTM who said, “well, aren’t you confident?” when he found out that I call myself a supergenius and then explained how I do my job to me. Oh, and that one cat on Twitter who tried to tell me how many tampons a woman needs each month.

Men, you are so fun!

So back in 1993 I wrote the review of Pearl Jam’s “Vs” and I said something about Eddie Vedder having a distinctive voice. Maybe I said one of the most distinctive voices in rock & roll. Maybe I just yammered on about how cute Eddie Vedder is for like 12 column inches (I did not, and I would not, because even though he is very, very cute when women talk about the cuteness of rocksars Music DudesTM become super dicks).

The day the newspaper came out Jason Becker came into The Spectator office and lectured me about being too complementary. About “being careful” when I say “one of the most distinctive voices in rock and roll.”

So yeah, I was right and he was wrong and don’t you forget it. Anyway, that Pearl Jam Unplugged was pretty fun to watch again after all these years.

Thoughts really do arrive like butterflies, don’t they?
Jodi

*Yes, I’m gonna constantly bring up the fact that this blog is twenty years old. Suck it.