It never occurred to me that my love of the Gin Blossoms’ “New Miserable Experience” was something I should be ashamed of until I wrote a short story for a Loft class in 2006. The story was called “Where Did You Sleep Last Night” and was set in 1994, shortly after Kurt Cobain killed himself. It was so epically shitty that the only traces of its existence reside in my memory. There might be a printed copy of it somewhere in my loft. Maybe.

The short story comes into this because it was my first inkling that not everyone revered the Gin Blossoms as highly as I did. When I talk about the Gin Blossoms, I’m specifically talking about their album “New Miserable Experience” released in 1992, and if you like you can add that song from “Empire Records” into this, also “Follow You Down.” 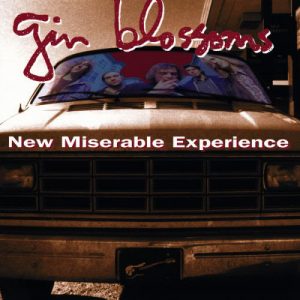 There was a scene in “Where Did You Sleep Last Night” that involved the main character and all her female buddies standing drunkenly in a bar not unlike The Grand Illusion in Eau Claire (and it might have even been The G.I.) and singing “Hey Jealousy” with much joy and vigor. The characters may have gone on to talk about the greatness of the Gin Blossoms. Who knows?

What I know is that when I got my marked up manuscript back from Vodo he had vehemently crossed out the Gin Blossoms reference. There might have even been a “Nope” or a “No Way” or even an “Ugh. Barf.” above the band name. There was something dismissive for sure followed by like five exclamations.

Of course I read that critique of the Gin Blossoms and was all, “Vodo has been so tainted by hipster bullshit that he doesn’t even know good music anymore. I bet he likes TV on the Radio or some such crap.”

Let me tell you, there was not a lot of love to be found. What was wrong with people?

[heading_entrance title=”Lost Horizons” text=”She had nothing left to say so she said she loved me & I stood there grateful for her lie.”]

The Gin Blossoms came around at a precarious time in rock & roll and pop music. Nirvana and grunge had taken over the world. Mötley Crüe & Poison were shown the exit, and top 40 music was trying to figure out what exactly it was going to be now.

So here comes “New Miserable Experience” a power pop record that leaned alt-country, which was barely a thing at the time, filled with lyrics that touched on some of GenX’s favorite topics: hopelessness, angst, authenticity, and the burden of growing up in the shadow of the fucking baby boomers (or, as it’s more commonly called “being a slacker”). There were songs that also mined lyrical gold: heartbreak.

Aside: I cannot tell you how many times I have heard “Cheatin'” come on shuffle while I’m doing something and wondered which early Wilco record it was one. Or maybe Uncle Tupelo, I would ask myself. No, definitely Old 97’s.

[heading_entrance title=”Hey Jealousy” text=”If you don’t expect too much from me, you might not be let down.”]

Now I would argue most of the brilliance of this album lies in the fact that the songs were emotionally heavy without sounding like it. They sounded like mindless fun, which was a delightful respite from the overbearing significance in all things grunge. Then there was the hooks that were catchy as hell and choruses that were instantly singable.

And I cannot state this strongly enough: the record was fun. FUN! God, did we need some musical fun up in the early 90s. Everything sounded so fucking serious.

Which is, of course, why so many sneer at it with derision. Hell, I’m often that sneering jackhole. I firmly believe when something gets that popular, appeals to that many people, it’s watered down, crappy pap designed to be palatable to a great number of people (see: Nicholas Sparks’ books, Twilight, and most sit-coms). However, sometimes the unthinking mindless masses get it right (see: Adele, The Fault in Our Stars, and cookies).

[heading_entrance title=”Found Out About You” text=”Is there a line that I could write, sad enough to make you cry?”]

Though many might claim differently now (like so many Spin Doctors deniers), everyone seemed to dig “New Miserable Experience” in 1993. You could talk about “Hey Jealousy” or “Mrs. Rita” with everyone you knew or met. Maybe that’s some of its romance. It seemed to be one of the last records where it was okay that everyone liked it and there was no snark or derision or “I heard of them first.”

It could also be my nostalgia making that last part up, because this record is very much 1993 to me — smoky bars, drunken singing, and the taste of a Delusion.

Regardless, it’s a damn fine not-quite-alt-country, power pop record that deserves way more accolades than it gets.