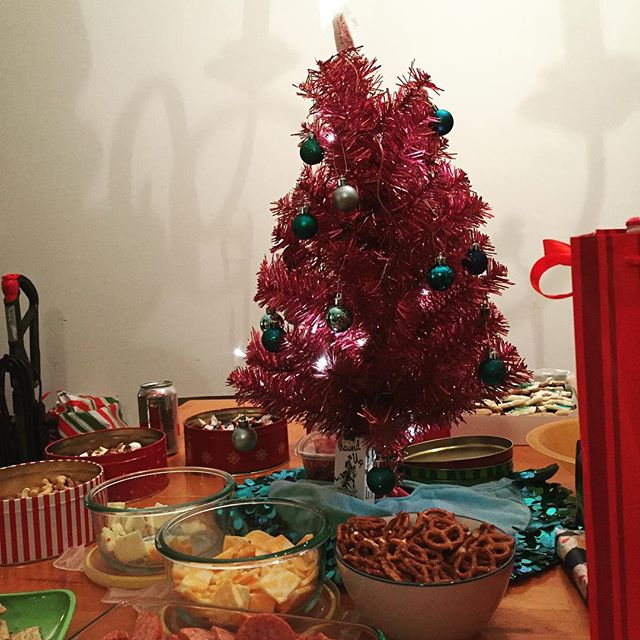 As is tradition, I hosted A Very St. Martin Christmas at Supergenius HQ on Christmas Eve. For the first time ever I bought a Christmas tree. It is two feet tall and pink and tacky and it cost $8. I love it. None of my aunts, uncles, or cousins noticed that I actually had a Christmas tree. They never noticed that I didn’t have one either. When they all invade my house it gets so tightly packed in here that there’s not much room to notice anything. During A Very St. Martin Christmas the stairs become prime real estate. If you get to sit on actual furniture you’re one of the luckiest people in the room.

My family is pretty loud and fucking hilarious. We spend most of the time together eating and laughing. My Aunt Anna tells the “cookie story” about that time she took the fall for some stolen Girl Scout cookies to save her brothers and sisters from a spanking even though she totally did not steal the cookies. She tells this story every year.

This year the decibel level reached an all-time high when Sister #2 introduced the SaranWrap Ball game, which involved peeling off 81,153 layers of SaranWrap to get to a prize. This was ridiculously fun and involved a lot of shouting, accusations of cheating, cries of “dice down,” and at one point the entire house chanting “Go Liam Go!” For the record, my Aunt Sherry won SaranWrap Ball, but my Aunt Janis got the MVP award for being a total unwrapping badass.

My cousin Jason spent most of the night walking around with my mini-Bozo the Clown punching bag toy in his pocket.
“You can’t steal that,” Sister #2 said. “I got that for her in Sarasota.”
“I stole a bunch of stuff last year and she didn’t care,” Jason said.

Have I mentioned that my cousin Jason is pretty hilarious? Every once in awhile he’d come into the kitchen to refill his wine glass and then act like a prize-winning boxer getting ready to head into another bout.
“It’s really tough being the life of the party,” he said, wiping his brow. “I can do this. I can make this party not suck.”

I would have been more offended by the party sucking comment if me, my sisters, and our cousin Katie hadn’t spent a lot of the night teasing Jason about his many marriages (two and a half according to him, two according to us, which doesn’t sound like much but Jason is 34).

As the night wound toward a close, Jason took up residence in the middle spot of couch and we all began to say a goodbye as people left.

The door hadn’t even clicked shut behind Katie when Jason sighed dramatically and said, “I hate when she comes.”

The room erupted in laughter.

“She ruins Christmas,” he said. “And she always brings that Thad [Katie’s husband].”

This was all the more funny, because Katie & Jason are about six-months apart in age and grew up a block away from each other. They went to high school together and are pretty close.

The best part was that later on in a Facebook thread Katie made a comment about how when she left, people laughed so loud and so hard she almost wanted to come back in.

Of course the joke continued with every person that left after that. It was only the first joke of Christmas. There were a lot more to come.