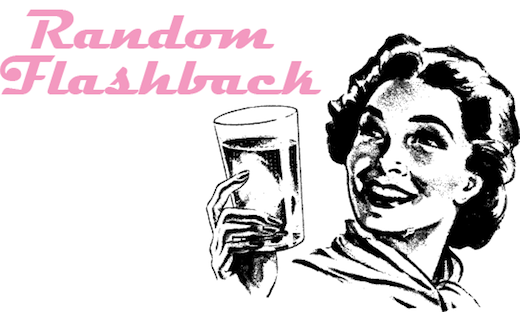 This random flashback brought to you by hearing “Creep” by Radiohead on the radio this afternoon.
After college and before Corporate America I spent two(ish) years working at two different gas stations. With twenty-years of hindsight I can see these jobs were not so bad. I basically got paid to listen to The Replacements, smoke cigarettes, and read — mostly the trashy magazines we sold but occasionally, I’d bring a book with me. I lived at home for most of the this time and all my money was spent on CDs and books. It was kinda glorious.

However, as a sullen 20something asshole I thought the jobs were beneath me and that my life was wasting away one shift at a time. I hated working there and worried incessantly that everyone I sold Marlboros and Mountain Dew to would think I was nothing but a gas station attendant. I had gone to college! I was smart! I read books! Having people knows these things was very important to me at the time. It’s not like I was some loser.

Did I mention what a jackass I was? Total jackass. I would have more guilt about this if I wasn’t firmly convinced most people are total assholes while they’re in their 20s. It’s biological or something.

Working at a gas station was about as exciting as you’d imagine it to be. There were annoying things that happened (people dressed in RenFest garb) and unusual things (Davy Jones from the Monkees coming in and buying an ice cream sandwich and a coke), but mostly it was mundane as hell.

Most of the customers blurred into a faceless blob, with a few regulars who stuck out when I was working there but have been lost to time.

He was nearly as tall as I was, darkly-tanned, brown-eyed, and you could tell his normally dark hair had been lightened by the sun to a sandy shade of brown. He wore a tank top splattered with paint that showed of nice arms and one of those hemp necklaces that clung tight around his throat. It’s forgivable, because it was the nineties. We didn’t know any better.

As soon as he walked in all I was all ZING! POW! hard nipples, tingling between my legs, and short of breath. It must have been a chemical reaction. I had never seen him before but damn my reaction was physical and immediate.

He smiled as he walked up to my cash register with a half-gallon of orange juice in one hand and a Snickers in the other. My knees got all jelly-like and my brain left my body. Then, when he was about two feet away, he burst into song.

I wish I was special. You’re so fucking special. But I’m a creep. I’m a weirdo. What the hell am I doing here?

I barked with laughter as he plopped his stuff on the counter between us and I rang up his stuff.

He grabbed his orange juice and candy bar, while leaning over the counter and smiling right in my face, raising his eyebrows in goodbye.

I watched him walk across the parking lot with two other dudes to a truck filled with ladders and painting stuff. I gasped when he climbed into the truck and shut the door, but only because I had been holding my breath.