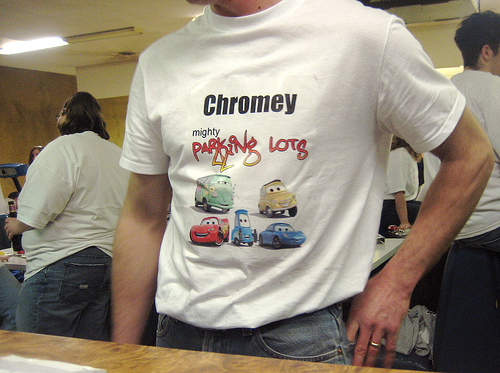 As I mentioned before they are gonna tear down the bowling alley to put up a parking lot. So when my cousin Wendy suggested we gather together for a final Chromey v Chromey, everyone was pretty game even though we just had one in November (as is tradition).

After arriving an hour late to Sister #3’s house to finish the t-shirts Jaycie, Max, and I had designed, Sister #3 and I found ourselves in an odd dilemma. We had never done the actual iron-on portion of the t-shirt making. Usually we left that to Sisters #2 and #4 on Thanksgiving night. Of course I had left the instructions at my house and of course we couldn’t get a hold of Sister #2, so we were left with nothing to do but call Sister #4. 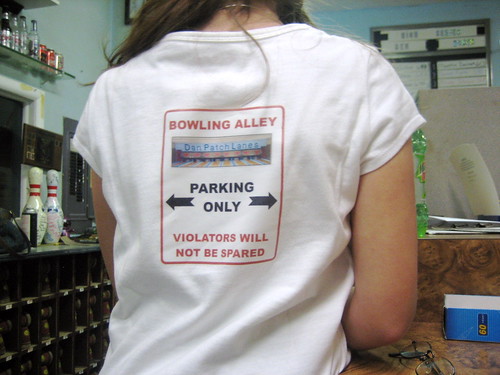 We didn’t want to call because she already felt horrible that she couldn’t make it to the final Chromey v Chromey (she lives in Idaho), but we were desperate. She talks us through the iron-on process, we finish the shirts, clothe the children, and rush to the bowling alley.

The joint’s already half-full of the J. Chromey family and it’s chaos. Family events like this are always chaos. There was an extra buzz of energy floating through the air because everyone was waiting for the photog from the Minneapolis Star Tribune to show up.

Amidst this chaos the phone rings, and I pick it up with a little lead in my heart knowing this is probably the last time I’ll get to sigh in exasperation and say “Hello, Dan Patch Lanes.”
“Hey,” the voice on the other end says.
It takes me a minute to realize it’s Sister #4. “Hi Kelli,” I say. “Nobody’s here yet.” I figured she wanted to talk to the J. Chromeys and give them shit about how if they win, it’s because she’s not there.
“Is that Keke?” Jaycie asks while tapping on my belly.
“Yes, you want to talk to her?” I ask.
“Jaycie wants to talk,” I say to Sister #4 on the phone. 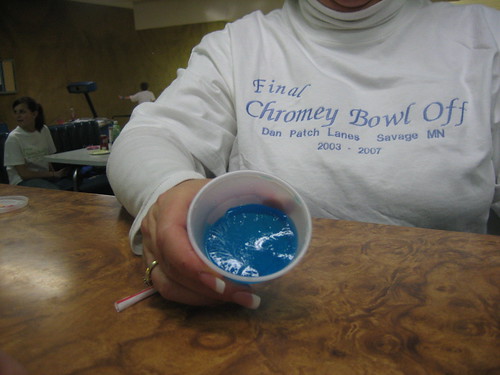 I immediately lose track of the phone and the conversation until my mom turns around from the cash register (the phone sits right underneath it) with tears in her eyes.
“She’s crying,” my mom says. “I don’t even know why she called. It’s just upset her and me.”

We’re all a little quiet because we do feel bad about Sister #4 not being here. But then there’s the chaos and that quickly captures our attention, and we quickly forget Sister #4 and her woes.

About ten or fifteen minutes later, Sister #2, #3, and I are all sitting at the bar shooting shit and talking trash to the various J. Chromeys when Sister #3 brings her hands to her mouth and points towards the door. “Oh,” is all she says.

Sister #2 and I look. I immediately start to scream and cry, there in the doorway is Sister #4 with a pair of socks in her hand.
“Jaycie told me on the phone that she needed some socks so she could bowl,” she said. “So I brought her some.”

There was hugging and crying and screaming. I feel bad for that poor Strib photog. He’s probably a little deaf right now.

Turns out that Wendy wasn’t behind the final Chromey v Chromey at all, and it was Sister #4 who was orchestrating the whole thing because she can’t be here next weekend for the final weekend.

She totally punked us and it was glorious.