The big email I had been waiting for since June slid into my inbox in the midst of an exhausting client meeting. I was at a quirky coffee shop in St. Paul repeatedly explaining why the website I had built in five days was not perfect. The proxy client was trying to ding me on “quality” issues and I kept saying “but yeah, five days. FIVE days! Five.”

Because the meeting was so anxiety-inducing I forgot the email had flashed on Ziggy, my iPhone, until I was nearly home. It took all my self-control not to try to read while driving. I ended up pulling into a parking lot to hold my breath and scroll, sweaty-fingered through what The Potential Agent (TPA, henceforth) had to say about The Beast I had worked on so diligently for the better part of three years.

OH MY GOD! My brain screamed as I read TPA’s words. I got an actual editorial letter from an agent about a book I wrote. It was a major milestone and I was so happy to experience it in the parking lot of a Wendy’s in Savage, Minnesota.

The letter was good. It wasn’t “you are clearly a literary genius lets go to auction so we can get you a million dollar advanced” good. It was more “you have a lot of work to do but I believe in you and your book” good, which is the next best thing to million-dollar advance for an unpublished unknown writer. At least I think it is.

A lot of it was about showing over telling, and somewhere Vodo & Dale were shaking their fists in the air saying, “we taught you better.”

As soon as I got home I sent the letter to Christa & The Black Sheep. Who ohhed and ahhed the appropriate amount and reassured me that this was all good.

That was back on October 1st.

What have I done since then? Read the letter 88 times and took a single, one-eyed peek at the manuscript edits she sent along, quickly slammed shut my laptop, and ran away to the comfort of my couch and endless Project Runway reruns.

Yesterday I hit the apotheosis of avoidance and slack. I sat on the couch for roughly twelve hours crocheting a scarf and watching Project Runway (I’m in the midst of Season 10. Ven just got the ol’ auf wiedersehn). I did zero things with my brain yesterday. None at all. I mean aside from the things it does automatically like keep my heart pumping and my breathing going.

As I climbed the stairs to bed last night I kind of beat myself up about how lazy I’ve been. An uncharacteristic October funk had taken hold of me and I haven’t been able to shake it.

Last night my sleep was filled with strange dreams about sleeping in the middle of party, and other vague images about my old friend Seamus, Sister #2, and meetings where I was lauded for creativity and vision. I woke up as the sun was rising, the sky was all pink and wonderful, and my brain began singing Suzanne Vega’s “Gypsy”,You come from far away with pictures in your eyes of coffee shops and morning streets in the blue and silent sunrise.” My first thought still in the fog of my dreams was “Yes, I am a strong and creative woman.” 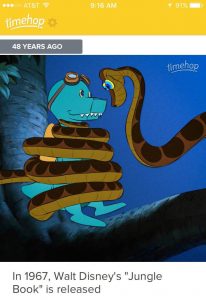 I didn’t intend to sit down this morning and read the comments TPA made on The Beast. In fact, my plan was to do work until I had to make soup for Family Dinner. But then I noticed at the end of my Time Hop that today is the 48th anniversary of Disney’s “The Jungle Book,” which plays a large role in The Beast.

Before I could think or fret, I popped open that word doc and read every single thing the TPA had to say. It wasn’t too bad. It was some stuff I knew needed to be fixed and some stuff that was nice and made my eyes sting with tears.

And that one comment up there about Dawson’s Creek that made me think, “oh yeah. This is right. She gets it.”

So this is seven-hundred words to say tomorrow I go back to work.