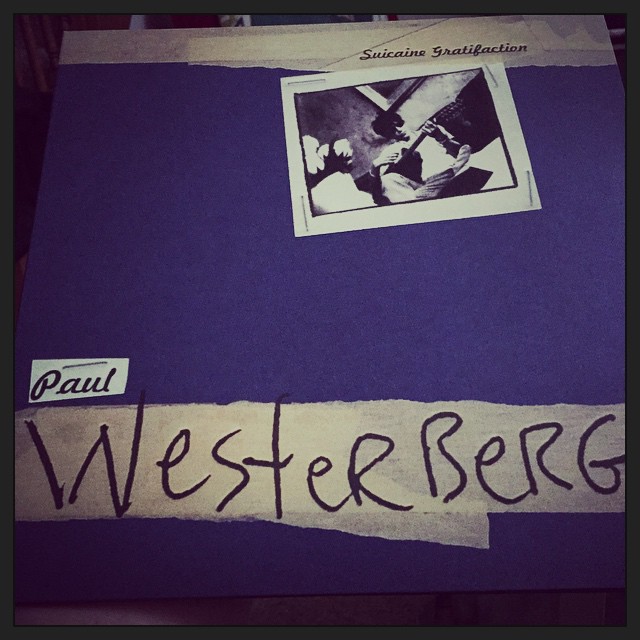 One of the things I forgot to mention during my self-indulgent wallowing session a few weeks ago is that I went out and bought Paul Westerberg’s “Suicaine Gratifaction” on vinyl.

Nothing soothes an aching heart and a wounded ego quite like material objects and capitalism, right? I will shove records and comicbooks into that hole in my life until I feel whole again, damnit.

So to cheer myself up I bought the saddest record I could think of, Westerberg’s 1999 third solo release, and my absolute favorite of all his solo records. While my much-documented love for The Replacements was at first listen, it took me a little longer to really fall in love with Westerberg’s solo work.

Now I love “14 Songs” but it took awhile and the less said about “Eventually” the better, but Suicaine, man, Suicaine is my record. It’s hardly left my record player at all in the past two weeks. At least not side one. I can’t quite make the flip because “Bookmark” could decimate me on my best day filled with book contracts and John Cusack-provided orgasms. At least I think it could. I’m willing to give it a shot if John and any publishing houses wanted to do a little experiment.

Ever since the Young Chef pulled the rug out from under me I’ve been unusually delicate, tender, not fragile because I won’t break, and so lonesome that it takes my breath away.

While I know my solitary months are coming to an end and I know loneliness is a choice and there are at least 90 things I could do right this second with human beings who would enjoy seeing me, I’m still sitting here hungry and typing by the glow of my laptop. Being an introvert is hard, y’all. After tonight I will have to see people and do things for the next eleven days in a row.

But that’s not my point. My point is right now I am lonely and I’ve been listening to the first side of “Suicaine” endlessly, specifically “Best Thing That Never Happened” because of course, and I’m having that total Rob Gordon moment.

Nobody worries about kids listening to thousands, literally thousands of songs about heartbreak, rejection, pain, misery and loss. Did I listen to pop music because I was miserable? Or was I miserable because I listened to pop music?

So there you have it. Also, I feel the need to tell you, Darlings Ones, that the Young Chef apologized and that’s all I want to say about that at the moment.