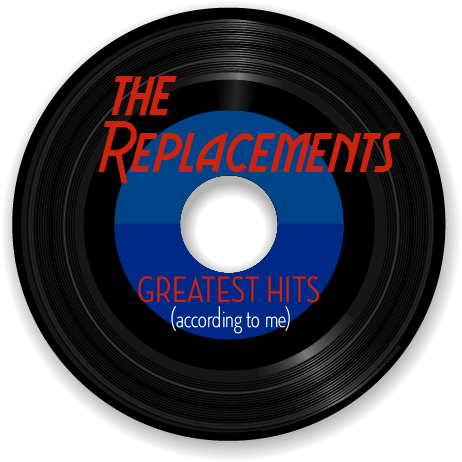 In honor of The Replacements’ appearance on The Tonight Show tonight, I decided to but myself through this excruciating exercise. Much like the other Greatest Hits According to Me the list had to be between 16 and 20 songs. I was going to be super pedantic and find all the ‘Mats’ songs I’d mentioned in the history of I Will Dare, but there are some 290 posts that mention Paul Westerberg and The Replacements and who has time for that nonsense?

I Bought a Headache

I love a lot of songs off of The ‘Mats first album “Sorry Ma, Forgot to Take Out the Trash.” For me this record is the soundtrack to shitty post-college, pre-career jobs. When I worked at the gas station, “Customers” was the sound of all my fantasies. “I’m in love with the girl who works at the store. . . .”

But of all the songs I chose “I Bought a Headache.” Why? Because it’s clever and of all the songs on this debut record I think it hints the most at the Westerberg song writing to come. Plus, I like the way he says “Christopher Mars” at the end.

I just took “Valentine” (which I do appreciate) off the list and replaced it with this. This one is more fun and the sassy “na na nas” are pretty rad. Plus, “Valentine” is a predictable choice.

If you want to have a brief idea of how emotionally fraught making this list is for me, I just swapped out “God Damn Job” for this one. I don’t know why. It just felt like the right thing to do. I have the least emotional connection with “Stink” though I eventually came around.

Next to “Can’t Hardly Wait” “Color Me Impressed” is probably the Replacementsism I use the most. I’m annoying like that. However, if I were a dude named Gary you can bet your sweet ass I’d been about eleventeen times more annoying.

What’s so great about this song besides the whistle at the beginning is the double meaning of the line “Can you stand me on my feet?” This is what I love so much about Westerberg’s writing (also, this one has another shout out to Chris).

This is one that barely made this greatest hits compilation. And as my fingers type out these words I’m still a little on the fence. Of course we all know that it was very nearly the song Lloyd Dobbler played on that “Say Anything” boombox, but, depending on the day and my mood, the synthy sound grates on me. However, the sentiment of living without your touch but dying within your reach is kind of swoony.

Is there a song that sums up teenagehood better than this one? I don’t think there is.

This song find Westberg at the top of his game. Though, I have to admit, the whore line kinda bugs because I hate the word whore (and slut, and any other word that judges women on their sexual activity), but I chalk that up to the mores of a different time, you know the time when we actually used answering machines. Whore aside, this song is lyrically brilliant.

Kiss Me on the Bus

Handclaps. Have I mentioned how handclaps elevate song by at least 15%? It’s simple rock & roll math really, handclaps are fun, and so is this song.

This is the first of what I consider The Holy Triumvirate (the three iconic ‘Mats songs). The brilliance of this song is that virtually every post-Boomer generation could claim it as their anthem. (Sorry, GenX I already claimed Soul Asylum’s “Misery” for us. You’re welcome.)

The kind of frustrated, strangled scream at the beginning of this one, who hasn’t felt that? That, That should be the official sound of GenX.

Left of the Dial

#2 in the Holy Triumvirate. If you don’t get a stirring in your loins when the drum comes in about seven(ish) seconds into this song your loins are probably broken. They have pills for that. On record this song is pretty decent, but when it’s played live it’s elevated to something else and the memories of hearing it gives me goosebumps.

While I know Westerberg wrote the song about a girl in a band he had a crush for, in my mind the song has morphed into one for anyone who has fallen in love with a song or a band or someone who you bonded with over those things. So much longing in this song.

Also, if I ever start a band it will be called “The Sweet Georgia Breezes.”

This is a lovely, sad song that is perfect for those final crisp days of autumn when you can smell winter in the air. This song is what the word ‘weary’ would sing if it could do that.

I’m embarrassed by how deeply I connected with this song as a 23-year-old who was pretty sure she’d seen it all whose drinking buddies were bound to another town, who used to live at home but now stayed at the house. ACK! I was such a twit. That, however, does not take away from the loveliness of this song.

Here’s another embarrassing confession: for longer than I care to admit I thought Alex Chilton was a fictional dude Westerberg made up. This was when the Internet was a baby and you had to dial that shit up and once your AOL hours were up you had to pay lots of money for access. Sometimes we wandered around with ignorance that went unchecked for months and months and months.

I learned Alex Chilton was an actual factual person by listening to Evolution of the Revolution on Rev-105.

This has nothing to do with the greatness of this song which while lyrically okay, is more sonically catchy as hell. Also, handclaps.

This song is the quintessential Minnesota song. Everything about it screams Minnesota. The music is so delicate and sweet. Then there’s stupid hat and gloves and the snow and the Skyway. The passive love of something. The taking forever to get the gumption to make a move. The wah-wah sad trombone ending (not literally trombone, there’s no horns on this one).

#3 in the Holy Triumvirate. Speaking of horns, I am a strong proponent of all the versions of “Can’t Hardly Wait” that don’t have the Memphis Horns. Though, yes, I admit the horns-version does a great job of building the tension of the song, but I would argue the tension is just as delicious in the Tim version. However, the PtMM version has the better opening line “I’ll right you a letter tomorrow. Tonight I can’t hold a pen.” vs. “I’ll be there in an hour, take half a month on foot.”

Even with the crummier ending, the airshaft version is my favorite.

Much like “I Will Dare” I don’t know if I can ever find the words to explain my affection for this song or even why it’s so good. It just is.

This is the one that started it all on that long ago night back in 90s when Kelly McKnight gave me money for the jukebox. His only condition was that I had to play at least one ‘Mats song. If you read The Replacements book you already know this. I randomly chose “Merry Go Round” and set in motion something that would become a guiding force in my life.

That’s not even an exaggeration. You are, after all, reading these words on a 14-year-old website called I Will Dare. I don’t know what would have happened if I had chosen “Sadly Beautiful” or “Someone Take the Wheel.” It was this song at that moment that made me fall in love.

This was probably the second Replacements’ song I fell in love with. After all, “All Shook Down” was the first record I got and this one is exactly the kind of thwarted love song that I adore. And for a very long time I harbored a great desire to sign all wedding guest books as “Nobody.” I am exactly that kind of nerd.

Nowhere is My Home

Besides the opening drum the thing I love on this one is how ragged Westerberg’s voice sounds. It’s super hot. Also, finding this song when you’re like twenty four or twenty five and feeling very unmoored on the planet, it really speaks to you. Plus, the word disconcerted is awesome.

If Only You Were Lonely

This song has the honor of being the very first song I ever downloaded from the Internet way back in like 1996. It might have been a .WAV and not even an MP3. I can’t remember. What I do remember is that I listened to for about six months straight. God, the line “somewhere there’s a smile with my name on it” slays me still to this day.

This is also the song I would LOVE LOVE LOVE LOVE to hear more than any other song on Saturday when the ‘Mats take the stage at Midway.

(Visited 186 times, 1 visits today)
Greatest Hits According to Me The Replacements