I bought “Stink” the first time in the spring of 1996 at the Borders in Eau Claire, Wisconsin. This is odd for two reasons. One, that after searching everywhere in the Twin Cities I found the CD that would complete my Replacements’ collection in Wisconsin. Two, I’m pretty sure the Borders in Eau Claire didn’t exist while I was going to school. If it did exist, I had no idea because I preferred to buy all my books from the Book Peddler a heavenly two-story used bookstore on Graham in downtown Eau Claire.

“Stink” was never my favorite ‘Mats album. In fact, it often had to duke it out with “Don’t Tell a Soul” for the second to last spot when I listed my favorite ‘Mats albums in order. I can’t remember exactly why I didn’t like it. I think it sounded like a bunch of noise to me, or something. I find this surprising because I really, really love “Sorry Ma. . .”

The first time I bought “Stink” I had no reservations about laying out some ridiculous Borders-type sum for what was essentially an EP. I bet I paid something like $14 for it. At the time, I was rich. Or at least as rich as a 23 year old living at home rent-free and working at the gas station across the street from her parents’ house for $5.75 an hour could be. In 1996, let me tell you, that was pretty rich. All my income went to books, CDs, and beer. It was awesome.

I almost didn’t buy “Stink” the second time. I had a bit of internal angst about shelling out $50+ for music I already own, much less an album I didn’t particularly care for. Plus, I was a little skeptical about this whole “remastered” nonsense. I’m pretty hard of hearing. Really. I can barely hear out of my left ear due to some sort of childhood ear trauma that I claim to this day was caused by an ant crawling into my ear and chewing up my ear drum.

Yeah, I was wrong. There is something to be said about this remastered nonsense. Even Ol’ Tin Ears can tell that these remastered deluxe versions sound way, way better than the original version. Color me impressed.

I have been listening to “Stink” nonstop since it arrived at my house on Thursday. It’s pretty amazing. At least it amazes me. Until Thursday, I would have said that I was pretty done with being surprised by the music of The Replacements. While it would always give me that warm cookie feeling in my heart I didn’t think it had anything new to offer me.

Holy shit! I could not have been more wrong. If I were any kind of music writer I could put into words exactly what it is that makes “Stink” so great. I can tell you that shouting along with “God Damn Job” is a lot of fun and that hoarse screams of “go, go, go while you can” on “Go” make my chest hurt a little. Plus, if you’re not a total Westernerd and have never heard “You’re Getting Married” (one of the bonus tracks), it is so painfully raw and beautiful that it’s worth the $10 alone. No kidding.

And, this is totally off the subject, but when I looked at the liner notes for “Sorry Ma. . . ” I nearly crapped my pants. Young Tommy in the middle there totally looks like The Grad. Remember, The Grad? It’s uncanny, really. 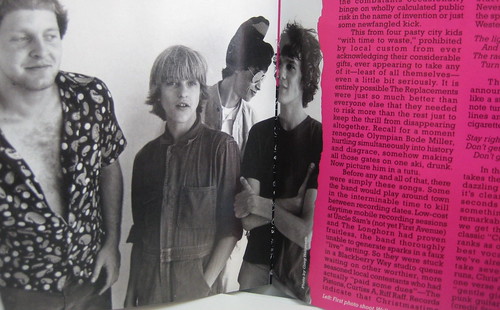