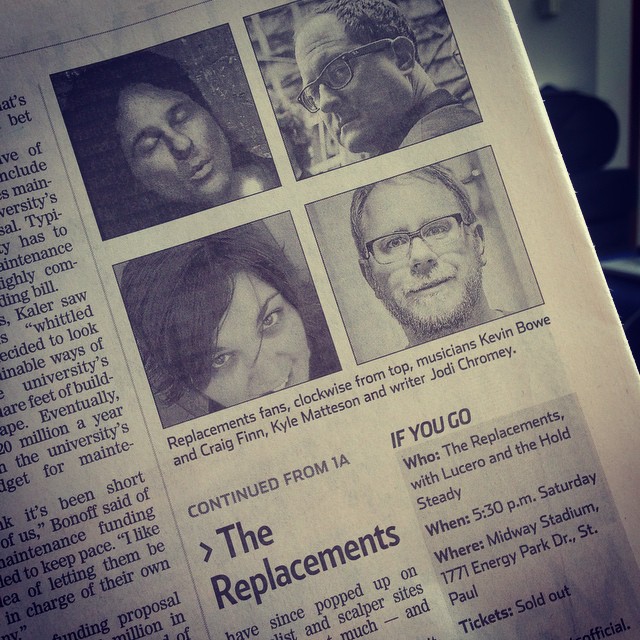 The ‘Mats concert at Midway stadium is a little less than seven hours away and it’s taking every single bit of brain power and energy I have not to explode in a joyous burst of glitter and sunshine and Skittles and rainbows.

Someone just re-tweeted Craig Finn talking about being at Midway and I couldn’t control my jazz hands complete with sparkle-fingers while sitting here in my La-Z-Grrl.

Speaking of Craig Finn he was one of the people Ross Rahaila of the Pioneer Press interviewed for his Replacements’ preview. I was one of those people too. I said a lot of stuff, including this about “I Will Dare”:

I love what that songs means. I will dare. I am going to do this. I am going to try this. I like that. The first time I heard it, my heart beat differently than before. It’s a physical response I can’t control.”

You should read the whole thing not just because I said stuff, but because it has a great lead, and because he never asked me which Mat I thought was the cutest (THANK YOU!).

The other cool thing that happened this week? I listened to the new Ryan Adams’ record 888 times (I’ll have more to say it about it once Matsmas is over) and tweeted this: 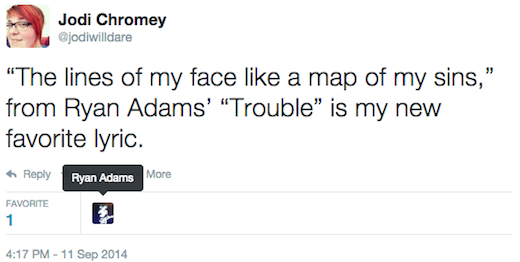 Yeah. That totally made my day.