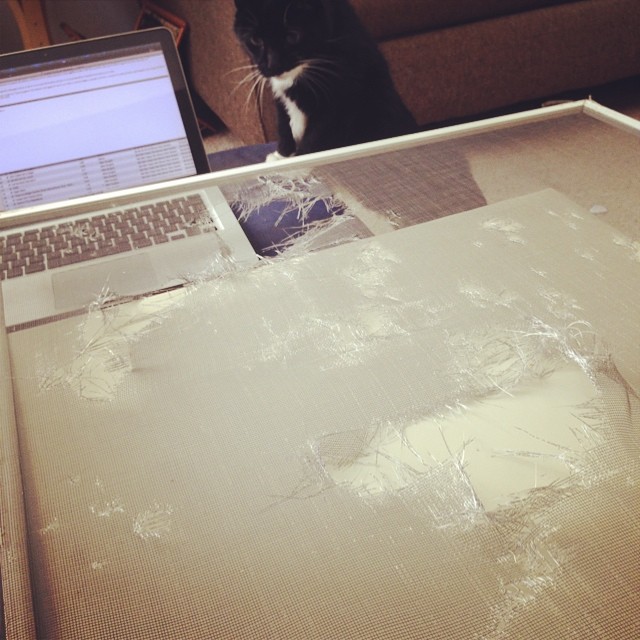 My hands are busted up at the moment. There’s a long bruise on the side of my left thumb. There’s a gash on the side of my right hand, under the pinky. The knuckles of that hand are pink, scraped raw. There’s also a half-inch cut that runs through the thumbprint area of my right thumb, but that’s unrelated to this story. That cut is due to some careless, inattentive squash cutting.

The rest of the injuries I wear as a badge of honor, earned during the hard work it takes to take care of my home. Yesterday morning I’d had enough with the derelict screens, the casualties of the Paco-Calico War of July 2014. They seemed to be taunting me every time I caught one of the flaps waving in the wind. “Your house is a dump.” “You live in a place with derelict screens.” “WHITE TRASH!” Those screens were total assholes.

So Sunday morning I let my hatred of derelict screens overcome my loathing of Home Depot and ponied up the $9.04 for a re-screening kit. Of course before that even happened I watched roughly 4.8 videos on how to repair a derelict screen. It seemed easy enough. Remove screen, remove old spline, and then remove derelict screen. Unfurl new screen over screen frame, cut new screen like shitty wrapping paper, use the pizza cutter looking thinger to jam new spline into the old groove, trim new screen, hang back in window.

I could totally do that. I’m no Schneider, but I can be pretty handy when I need to be. I’ve fixed the clogged garbage disposal a million times. I even fixed the downstairs toilet when it had that awful water hammer problem. Plus there was that legendary time I fixed my own blinker. And now screens.

Face it, I’m a motherfucking catch.

Speaking of motherfuckers, that was one of the 98,183 curse words I uttered while fixing those stupid screens. What none of the 4.8 videos mentioned was that sometimes spline is dusty, old, and crusty, and will not jump right out of the groove when you pull on it. No, sometimes the spline hangs on for dear life and only comes out in half-inch nubs that fly all over the place because you’re fucking chiseling that shit out with your flathead screw driver. Also not mentioned? That the fucking crustyass spline is so tough that sometimes your hands will slip and you will gouge and scrape and bruise your hands against that rickety ass window screen frame. They leave all the important information out of those videos.

They also left out the part that once you hung those screens and popped open your windows that you’d feel like a golden god all damn day because you accomplished this one thing you’d never done before.