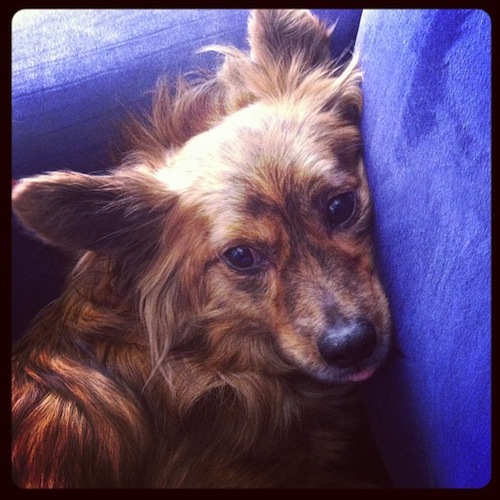 This is Walter. His a brindled Papillion-Chihuahua and belongs to Sister #2. He was named, by me, after a character in The World According to Garp. Walter’s staying at Supergenius HQ this week while the Sister #2 posse break spring in Florida.

Walter’s originally from some town near Joplin, Missouri and was released into the wild by someone kind of evil, hell-bound demon after his owner died. This kind of cruelty boggles my mind. How do you do that? Just kick some dogs out of a house and then just go about your business? Some kind neighbor rounded up the deceased person’s dogs and delivered them to some organization that rescues dogs. Somehow Walter ended up here in the Twin Cities and about a month ago he settled in with Sister #2 and her family.

Needless to say, Walter’s been a little traumatized and that makes him a fraidy cat of a dog. When he is scared he tucks his tale between his legs and then shakes uncontrollably. It is, in a word, heartbreaking.

Paco, my cat, is not helping matters. I’m shocked by the assholiness of his bullying. Usually when Paco’s cranky he just hides upstairs. This happens every single time The Tibbles come over, because Paco hates The Tibbs.

This bullying is surprising because until a month ago, Paco never lived in a world that didn’t include another animal. Madison was always here. You think he’d be a little more welcoming to poor Walter. However, if you did think that you’d be totally wrong, because Paco is a meanie. For most of the day he practiced all sort of intimidation bullshit on Walter including: circling the dog all puffed up and hissing; climbing on the back of the couch where Walter and I were sitting and giving him the stinkeye; and occasionally swooping in and giving Walter a few swats.

Mean. Mean. Mean. And so heartbreaking because Walter is so obviously terrified and Paco doesn’t seem to care at all. The tension seems to be easing, a bit. Paco is now disinterested in the dog. However, Walter won’t budge from the makeshift nest I made for him. Maybe tomorrow he’ll move.