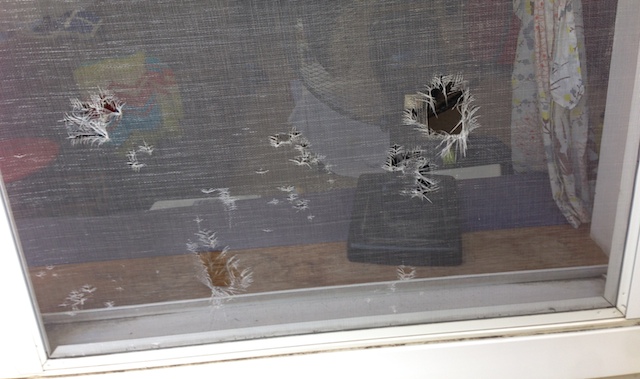 I think it was the wee small hours of the morning on Friday, like 2:30 a.m.ish. Paco, my sixteen-year-old cat, made a few noises that woke me from the dead of sleep. It started almost as soon as I was awake enough to realize what it was and in my sleep haze I decided my cat was dead. Well, Paco is dead, I remember thinking. I will wake in the morning to find Paco’s dead body.

Almost as soon as I had the thought I was back asleep. Sometime between the wee small hours wake up and my actual wake up, Paco came into bed with me, thus ensuring he would probably live to see the morning.

I say probably because when I stumbled down stairs I immediately noticed something wrong. There were a bunch of holes torn into the living room window’s screen. Those holes were not there when I went to bed the night before. It didn’t take my coffee-deprived brain to put together the wee-small-hours noise with the holey screen. There were some kind of late night shenanigans on that window sill.

Of course I blamed the only living creature in my house that was in the living room that night: Paco. He spent most of the day Friday on my list, and I shamed him endlessly in my head for this screen-tearing nonsense. We’ve lived here for nearly nine years (HOLY SHIT WE’VE LIVED HERE FOR NEARLY NINE YEARS!) and this is the first time something like this has happened.

I chalked up this nonsense to another of the annoying habits Paco has developed in his dotage (the others include suddenly after sixteen years climbing on the kitchen counters and sticking his nose in my human food).

However, last night there was also some noise in the wee small hours of the morning. These weren’t Paco death-like caterwauls, but a different kind of noise that was enough to wake me up but not enough to cause any kind of alarm.

And once again when I came downstairs I noticed that one of the holes in the screen (that I have lazily not repaired yet) was larger. This time, I couldn’t blame it on Paco because the window had been closed all night due to having the air conditioner on.

I’m kind of hoping Google will have answers for me.