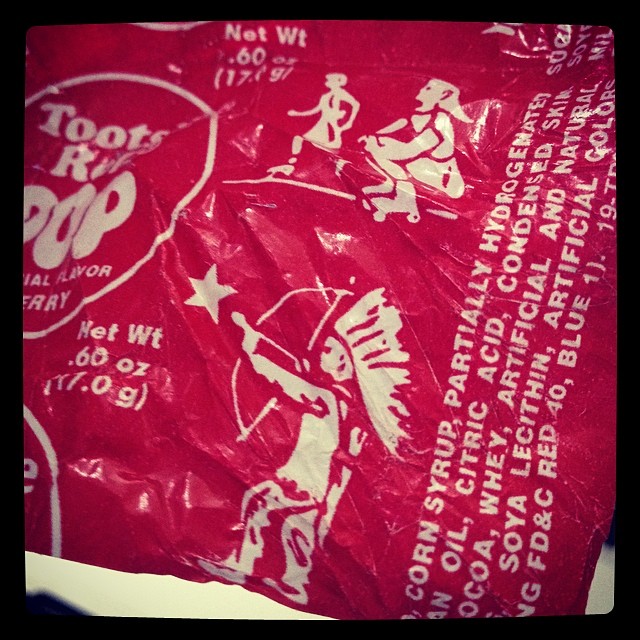 Sister #2 goes through food phases where she can’t get enough of certain food and she eats it all the time. A few weeks ago it was Chicago mix popcorn. One spring it was Nerds Rope. There was a chewy Sprees phase, the pesto something or other from Noodles & Company, spinach & artichoke dip, ginger chicken, and one horrible weekend when we lived in a shitty apartment together in Chippewa Falls, WI — MooTown Snackers. She will shudder with revulsion if you even mention them to her.

Since we gather at her house for Family Dinner on Sunday nights, the rest of us are often along for the ride of whatever food phase she is surfing. Sometimes the phase will get all over you and the next thing you know you’re at Target buying your own bag of Tootsie Pops and waxing nostalgic for the days of Tootsie Pop Drops.

Tootsie Pops is the latest phase, and we’re all addicted.

Because we love to argue, there has been much heated debate about the best flavors of Tootsie Pops. This was spurred on last night when I presented my sister with a bouquet of Cherry Tootsie Pops.

“Look,” I said, presenting seven or eight suckers to her. “These were all in one bag and no oranges!”

Ben, my brother-in-law, swung his head around to look at me. “What is wrong with you?” he asked. “You are like the wrongest person that ever lived. You hate pie. You won’t eat baked fruit, and now this.”

My crimes against baked fruit are legion.

So here, I present you the definitive ranking of Tootsie Pop flavors from best to worst.

If you were here we could clink Orange Tootsies as a toast to my brilliance, kind of like Liam and I did last night with our Brown Tootsies.