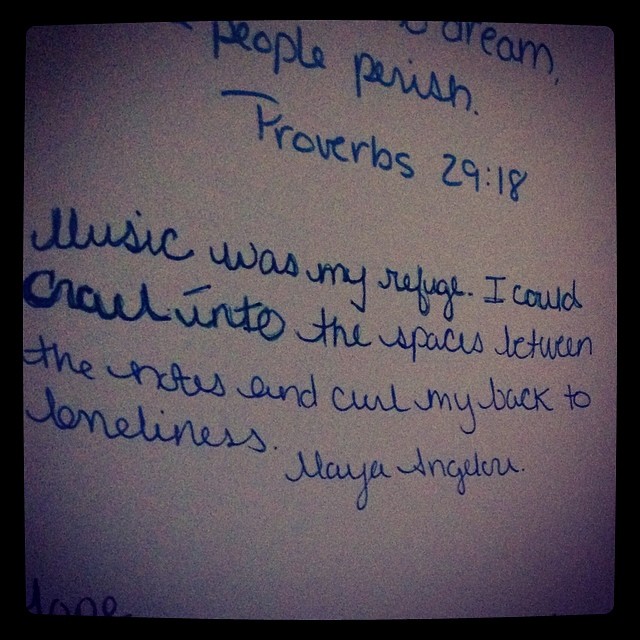 At Family Dinner on Monday I recounted my cleaning the loft exploits to my family, rattling off the treasure trove of old ticket stubs I discovered in a pencil box.

“Pearl Jam, R.E.M, Warped Tour,” I rattled off. “I even have the ticket from when we went to see Maya Angelou.”
“You saw Maya Angelou?” Jaycie asked.
“Yeah, she was my favorite when I was younger,” I said. “Your mom, Jodi Hanson, and I went. It was at St. Kates.”

And today we lost her, Maya Angelou.

She was one of those writers I discovered on the shelves of the Chippewa Falls public library, during that in between time after high school and before college. Due to parental ignorance I didn’t start college until a semester later than planned. Thus is the perils of being the first person in your family to attend college and growing up in poverty.

The inbetween time was marked with the kind of desolation & loneliness that would plague me for the next sixteen or so years. The kind where you feel unknowable and afraid, and are most definitely sure nobody will ever understand your unique pain. I was prone to dramatics as a late teen and early twentysomething.

This is where I was when I discovered Maya Angelou (and John Irving, incidentally). And while I remember being moved by ‘Caged Bird’ it was Gather Together in My Name that really won my heart. Because I am a vain reader, I like stories I can relate to, this one about music, poverty, her awkward height (Dr. Angelou was like six-feet tall), and quests for love set up shop in my soul. I remember reading that book and feeling a giant sigh of relief inside, “she gets it. she gets it. she gets it.”

The picture up there is a quote from ‘Gather Together.’ I scrawled it into the cover of my journal in September 1992. It usurped the traditional e.e. cummings* that I usually wrote in the covers. By 1994 both e.e. and Maya would be replaced by, for some reason, J.D. Salinger (as Holden Caulfield).

Incidentally, when I posted that picture it was an e.e. cummings poem that came to mind, “i carry your heart with me(i carry it in my heart).” I have carried Maya’s words in my heart for twenty-two years now because as much as I’ve read since then, as much as I write now, she’s the one who most accurately captured how I feel about music.

(the traditional e.e. cummings quote:
*To be nobody but
yourself in a world
which is doing its best day and night to make you like
everybody else means to fight the hardest battle
which any human being can fight and never stop fighting.”)