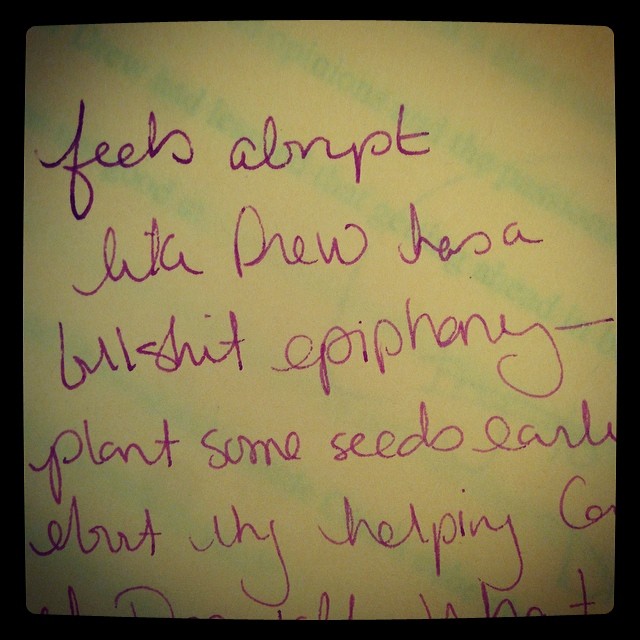 When I was a precocious, annoying, twenty-year-old I took a Women’s Lit class. It was awfulmazing, equal parts awful and amazing all at the same time. It was a summer class with maybe a dozen young women around my age and one guy.

The class was exhilarating and frustrating. It was the first time in my life where I spent time talking about books with other women. We read The Bluest Eye, The Yellow Wallpaper, and maybe even The Awakening. There was a bunch of poetry and some short stories too.

It was frustrating because one of my classmates took every opportunity she could to point out how “male” I was. My point of view wasn’t as valid because it “was so male.” Or my experiences weren’t worthy because I was “like a man.” I cannot even begin to tell you how much devastation she wrought on the super slim grasp I had on my own femininity. As if it never occurred to me that a giant, 6’5″ woman didn’t fit ANY picture of femininity ever offered up by literature or music or pop culture, Sarah had to make sure that I was reminded of that every damn time we had class.

Oh, if only I had a Delorean and 1.21 gigawatts of electricity and the knowledge I’ve acquired over the past two decades, I’d go back and tell Sarah a thing or two gender stereotypes and being a fucking bully.

Even with Sarah trying to destroy my ego, I still loved the class. Professor Haakanson was fabulous and pushed us to go beyond our initial impressions. She forced us to think critically and challenged us to say what we actually believed and not what we thought was the right answer.

In a strange confluence, while I was sitting on the couch tonight missing my writing group due to a skating rink forming at the end of my driveway, Marge Piercy’s poem “Unlearning to Not Speak” flew into my brain. It is a poem I learned in that Women’s Lit class, a poem I glibly dismissed at first because, “why didn’t she just call it learning to speak?” Professor Haakenson quickly dispatched my smart ass with a sweet burn about how not everyone is as willing to share every opinion they have as I am.

This was one of those moments in my life where I was faced with who I appeared to be and who I thought I was, and how those two images did not match at all. Me? Opinionated? Me speaking my mind? Really?

Of course, she was right. I was and am opinionated and not afraid to share those opinions with anyone who will listen. And often with those who won’t or don’t want to listen. But this wasn’t always the case. In fact that summer I was 20 (or 21, I can’t remember) I was so new to expressing my opinions that I didn’t even recognize I had become that person.

The house I grew up in was not one where opinions dissenting or otherwise were welcome. In fact, you pretty much kept your mouth shut about what you thought lest you get hit in that mouth. Or shunned. There was a lot of shunning. It’s probably why I turned to writing at such a young age, words on paper meant freedom.

By the time I turned twenty, after a year or two living outside my dad’s oppressive regime, I had begun to unlearn how to not speak.

In fact, I have learned so well how to not speak that I never shut up. Take last night, for instance, while watching Jimmy Fallon’s debut as host of “The Tonight Show.” His choice of first musical guest was U2. I hate U2. I loathe U2 with a fiery passion that has nothing to do with rational thought and everything to do with gut-level emotion. The entire time Bono and his band were on my TV screen I sneered.

Because I had an opinion, of course I had to share it, and took to Twitter where I had a few friendly exchanges about U2. They were the typical exchanges espousing the “awesomeness” of 80s and early-90s U2 and me being “whatever they still suck.” Much like Tom Petty in 1989, I won’t back down. The conversation turned into one about criticizing art and spending your energy only promoting things you love. It’s one of those philosophies I understand, but cannot practice. I confessed to my sparring partners that I suffer from the inability to shut up.

That’s not an apology. That’s merely a statement of fact. A warning. It took me too long to learn how to not shut up, to go back to being quiet ever again.