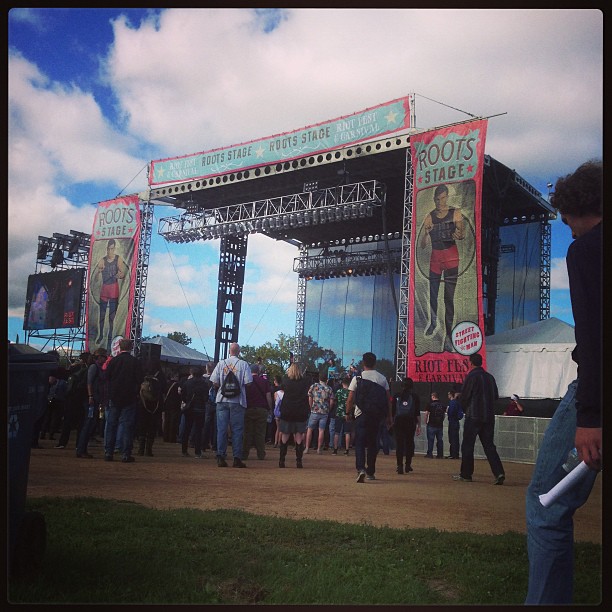 When I was in college my friends and I were convinced that if there were a weirdo in a 10-foot radius, he would come hit on me. Way, way, way after college (a few years ago) my friend Wan said weirdos talk to us (it happens to her too) because we smile a lot, even when we don’t mean to smile. Some people have a bitchy rest face. I just fucking smile my fool head off.

However, it was not my smile that attracted Rose Penis. I’m not entirely sure what it was that brought him to me, and I knew he was a’coming because I watched him not-so-surreptitiously make his way through the crowd. Every time I looked up from my phone, he was watching me. This was during the short break between The Smoking Popes and Bad Religion. Finally, I looked up once and he had pulled up some grass next to me.

“You lost,” he asked?
“Nope,” I said and had to fight every single instinct that I have not to make a comment about the velvet rose he had sticking out of his zipper. I know this is RiotFest and all, but who does that? The only reason to stick a long-stemmed, red rose made of velvet out of on zipper is to call attention to your penis-area right?

Like, I just can’t quite puzzle out the logic and what he was hoping would happen. Was he hoping that I (or someone like me) would have been all “Nice rose, can I suck your dick?”

Also, dude could not take a hint. Even once we stood up and I was a full foot taller than he was, he tried to yack my ear off during Bad Religion. Finally, I just skedaddled.

Before that I got to see Dessa sing Warsaw and if she didn’t have to compete with Joan Jett, that might have been my favorite part, but then there was Joan. . .