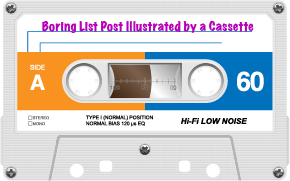 So for the 40th year in a row I was denied a MacArthur Genius Grant. I’m pretty sure this repeated snubbing has more to do with the fact that people keep forgetting to nominate me than it has to do with my bona fide geniusness.

I understand. Life is busy. You have work to do and books to read and “Dancing With the Stars” to watch and iPhone 5 wallpapers to choose (I went boring and just kept the Superman one I’ve been using for like 281 years. Also, the iPhone 5 is sexy and tall, exactly how I like my men. Also, I’m struggling a little with the five rows of icon paradigm shift. Also, my iPhone 4 looks like a stupid brick about as quaint as a Motorola Razr).

So to help you along with next year’s nomination forms, I thought I’d make a handy list of things you could probably nominate me about if you were so inclined.
[arrow2_list]