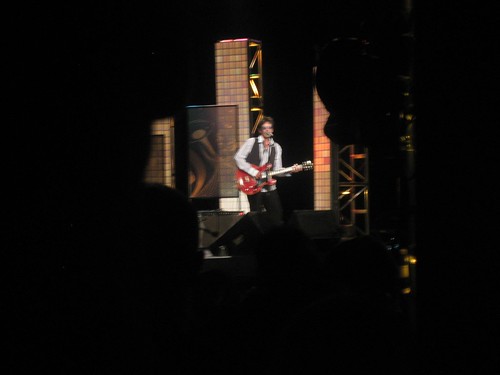 The thing I liked the best about last night’s Paul Westerberg The Craft talk/performance at First Avenue in Minneapolis, was when Westerberg and Zanes (the interviewer from the Rock and Roll Hall of Fame) talked a bit about the fans.

I guess in some magazine interview Westerberg had referred to his fans as a fistful of weirdos. I just love that description. It’s funny and it’s apt. Westerberg and ‘Mats fans usually fall on the weird side of “normal.”

Westerberg then went on to talk about some of the online loonies which can be downright scary, and how he avoids going online and wants nothing to do with it. Before a few months ago I might have considered myself an online loony, but after having dealt with and heard about the real-loony-deal, I realize I am completely and totally sane in my fangirlishness.

Some other highlights of the show included the mad props he gave to Ben Folds for writing “beautiful and clever melodies” and when Westerberg talked about how he writes bridges the same way Paul McCartney and Elvis Costello write bridges.

Oh and when Westerberg said that he’s been trying to write “Tumbling Dice” for 20 years.

The show was really quite interesting — the music parts were fucking magic. Seeing Westerberg live fills me with electricity and I don’t think I’ve ever been disappointed. I even cried a little during “Can’t Hardly Wait” because I am a goober.

The interview stuff was, er, disappointing. I really like what Ross Raihala had to say about Zanes’ weird interview style. It was odd that Zanes totally dismissed the other ‘Mats. In fact, it’s really quite disappointing. As much as I love Westerberg, I don’t think we’d even know his name if it weren’t for the magic that happened when he, the Stinson brothers, and Chris Mars came together.

Also, since the show was part of MGD’s The Craft series, I wished they had spent more time discussing the actual craft of writing song lyrics (the writer nerd in me can never be turned off), and less about producing music. Because, one of the things I love so much about Westerberg is the lyrics. He’s a clever and literate songwriter, and I would have loved to hear more about that.

He hinted at a little of it when he sang a new song called “Everybody’s Stupid,” a song he said he wrote after hearing about a friend of his son’s parents getting divorced and how the poor kid was the last to know. Westerberg said he went home and wrote the song based on how he thought the kid would feel.

P.S. You can hear some of the songs from last night over on Paul Westerberg.net